We are a people in love with vitamins. The US market for them is valued at $23 billion—and it’s growing by 7 percent each year. And yet, despite our zeal for vitamins, we still don’t know very much about what they actually do. The strange history of our national vitamin fascination is the subject of journalist Catherine Price‘s new book, Vitamania: Our Obsessive Quest for Nutritional Perfection. In it, she reveals how scientists first discovered vitamins, how marketers seized on them, and how the resulting vitamin frenzy has forever changed our beliefs about health and nutrition. “In the case of religion, we put our faith in gods,” Price writes. “And in nutrition, we have vitamins.” Embedded in Vitamania are many strange and wonderful facts, stories, and revelations about vitamins. Here are a few of my favorites: 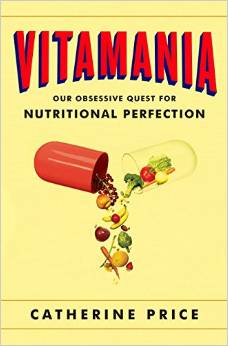 1. The goji berry/bone broth/fish oil of yesteryear was something called “yeast cakes.” This item, which Price describes as disgusting-tasting “yeast that has been wrapped in foil and pressed in foil like a bouillon cube,” was available “everywhere from groceries to cafeterias, lunch counters, and soda fountains” in the 1910s, ’20s, and ’30s. Initially, yeast cake makers promised only that the B vitamins in the cakes would treat constipation, but by 1920, ads also swore that they would cure “skin troubles, stomach issues, and a ‘general run-down condition.'” Fleischmann’s—still a leading yeast manufacturer today—saw its sales triple between 1917 and 1924. The company continued marketing yeast as a health food until the Federal Trade Commission made it stop because of its false advertising in 1938.

2. People used to think that vitamins could make you a better person. Shortly after the discovery of vitamins at the turn of the last century, writes Price, some scientists reasoned that since vitamins seemed to be essential to our physical health, they must also help shape our character, as well. A vitamin researcher named Roger Williams said in a 1942 awards acceptance speech, “Since an ample supply of vitamins can foster a higher intelligence in human subjects, it also has the capability of fostering morality.” In 1941, the New York Times reported that “along with national unity and national faith in democracy, there is another potent morale booster, the name of which is vitamin B1.”

3. Our flour is enriched with thiamin because of one weird zealot in the 1940s. During World War II, physician Russell Wilder, who was head of the Mayo Foundation’s Department of Medicine, became convinced that vitamin B1 (a.k.a. thiamin) was essential in helping people fight wars. Never mind the fact that his evidence consisted of two studies performed on a handful of patients in mental hospitals—he strongly believed that Hitler was subduing the people he conquered by depriving them of B1, and lectured about the importance of thiamin in American diets. His crusade worked: Pretty soon, the New York Times was running recipes for thiamin-rich baked goods, and thiamin-enhanced products—from donuts to tobacco—began to appear. The government began to require millers to add thiamin to their flour. Today, it’s no longer required, but most still do.

The founder of a research lab “opened up a capsule of a supposed Chinese sexual enhancement herb to test it for possible adulterants only to see a piece of a Viagra tablet tumble out.”

4. Some food manufacturers were terrified of the trend of fortifying foods with vitamins. That’s because, as Price explains, “the implicit marketing message of fortified foods—that the extra vitamins made them healthy—might also imply the opposite: that unfortified foods were not.” In 1938, the Grocery Manufacturers Association—the processed-foods trade group that still exists today—created an astroturflike group called the Nutrition Foundation, “one of whose goals was to prove that processing foods didn’t remove vitamins.”

5. Companies don’t pay to test whether a supplement is safe—you do. Today, despite the fact that “dietary supplements can contain nearly any combination of ingredients in any dosage, today’s supplement manufacturers do not have to prove that their products are safe or effective before selling them. Instead, the burden of proof is on the FDA to demonstrate, at taxpayer expense, that supplement products are unsafe after they are on the market.” This is because of the creation of the Dietary Supplement Health and Education Act of 1994—which supplement manufacturers directly helped to draft.

6. It’s not that uncommon for supplements to be “spiked illegally with prescription drugs.” Price recounts the story of the founder of a research lab who “opened up a capsule of a supposed Chinese sexual enhancement herb to test it for possible adulterants only to see a piece of a Viagra tablet tumble out.” Prescription drugs are so common in supplements marketed to athletes that the US American Doping Agency has officially warned athletes about the problem.

7. Practically everyone in the developed world gets enough vitamin A—but deficiency of it blinds as many as 500,000 children a year worldwide, according to the World Health Organization. Because the deficiency also weakens the immune system, up to 90 percent of children die within a year of going blind. The cure for this condition is a twice-yearly oral doses of Vitamin A, which cost about 2 cents each.

8. Deficiencies of vitamins and other nutrients might be passed down from generation to generation. The science around epigenetics—the idea that external influence on your DNA can affect your children and even your grandchildren—is still in its infancy. Nutrition studies offer the most persuasive evidence that this phenomenon exists. Price describes the incredible story of the Dutch Hunger Winter of 1944, when a combination of the Nazi occupation and an early freeze caused a famine that killed 22,000 Dutch people and sickened 200,000 more. In the 1970s, researchers found that the children of mothers who had survived the Dutch Hunger Winter were more likely than average Dutch citizens to develop cardiovascular and metabolic disease, depression, and schizophrenia. But here’s the kicker: The grandchildren of Dutch Hunger Winter mothers also had an elevated risk of health problems. Think about that for a second: If current epigenetic theories hold, writes Price, “we’re what our grandparents and parents ate. And our grandchildren might be affected by what we eat, too.”