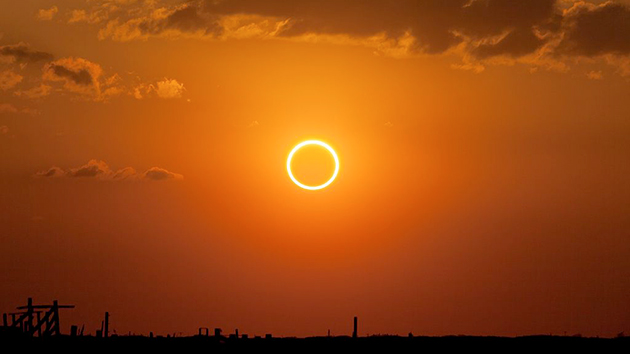 On March 20, Europe will experience a total solar eclipse for a few hours in the morning. The last time an eclipse of this scale happened in Europe was in 1999. Back then, Germany got less than 1 percent of its power from solar energy. Today, Germany is the world’s most solar-dependent country, drawing nearly 7 percent of its electricity from the sun. So when the passing moon blots out the sun, will the country’s lights go out too?

Over the last couple months, that question has gotten plenty of attention in the German media. In September, Der Spiegel reported that some power companies were afraid the eclipse would leave the power grid “dangerously unstable.” In February, the business weekly Wirtschafts Woche warned that factories could suddenly lose power if electric supply doesn’t keep pace with demand.

“It’s fair to say that this is the most dramatic intersection ever between a solar eclipse and solar energy,” one analyst said.

Still, the view among most energy experts is that the eclipse will come and go with no noticeable effect for consumers. That’s because the country’s utility companies have spent months preparing for what is essentially an unprecedented test of the futuristic German grid, which is a model for clean-energy advocates in the United States.

“Some of the hype ahead of the eclipse served to focus minds,” said R. Andreas Kraemer, a senior fellow at the Institute for Advanced Sustainability Studies in Potsdam. Power companies “relish the upcoming opportunity to show how they can handle that challenge professionally.”

So what’s the big deal, exactly? The sun goes down every night, of course, and Germany is quite accustomed to cloudy days (it gets about as much sunshine as Alaska). The difference with a solar eclipse is the speed at which sunlight will disappear from, and then return to, the power system. All electric grids operate on the fundamental principle that supply and demand must always be in perfect equilibrium, second-by-second. That dynamic becomes complicated when so much of your power comes from a source like solar, over which grid operators have zero control. And it’s especially tricky when the fluctuation is so rapid and extreme.

Typically, Germans can rely on coal-fired power plants to pick up the slack at night, when power demand is relatively low anyway. But those can take many hours to fire up, and the eclipse is expected to make solar output dip nearly three times faster than normal, according to a recent analysis by energy software company Opower.

“It’s fair to say that this is the most dramatic intersection ever between a solar eclipse and solar energy,” Opower analyst Barry Fischer said.

Generally speaking, a byproduct of the clean-energy revolution is an increasing need to replace the old grid model—which relied almost exclusively on a small number of big, inflexible power plants—with a highly flexible suite of interconnected options. So the eclipse is a chance to test just how responsive and adaptive Germany’s new grid can be. The outcome will be a valuable lesson for US grid managers who are looking to a much more solar-heavy future.

Take a look at the bite the eclipse will take out of Germany’s solar production, according to Opower: 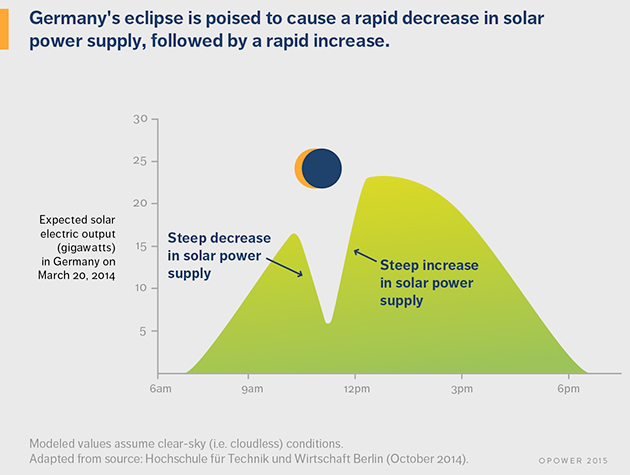 The exact change will depend the weather that day; if it’s already cloudy, the drop will be less drastic. (The current forecast for Munich—which is in Bavaria, the province with the most solar—is partly cloudy on that day.)

The temporary hole left by the eclipse will be filled by natural gas plants, which fire up relatively quickly, and possibly by the release of extra hydropower. And utilities have the option of communicating directly with heavy power users—big manufacturing facilities, for instance—and asking them to slow down production for an hour to ease the burden. It’s a bit like an orchestra conductor calling on an array of instruments in real time to keep up a steady flow of music.

Moreover, Kraemer pointed out that the eclipse won’t happen all at once; it’s not like flipping a switch. As the moon’s shadow moves across the country, the impact on solar will be phased in and out geographically.

A final option is energy storage, where solar power from the previous day could be kept in giant batteries and released during the eclipse. Utility-scale storage is still in its infancy, and it won’t be on the table next week. But a spokesperson for Germany’s solar-energy trade association said that solution could be up and running in time for the next major eclipse…in 2048.