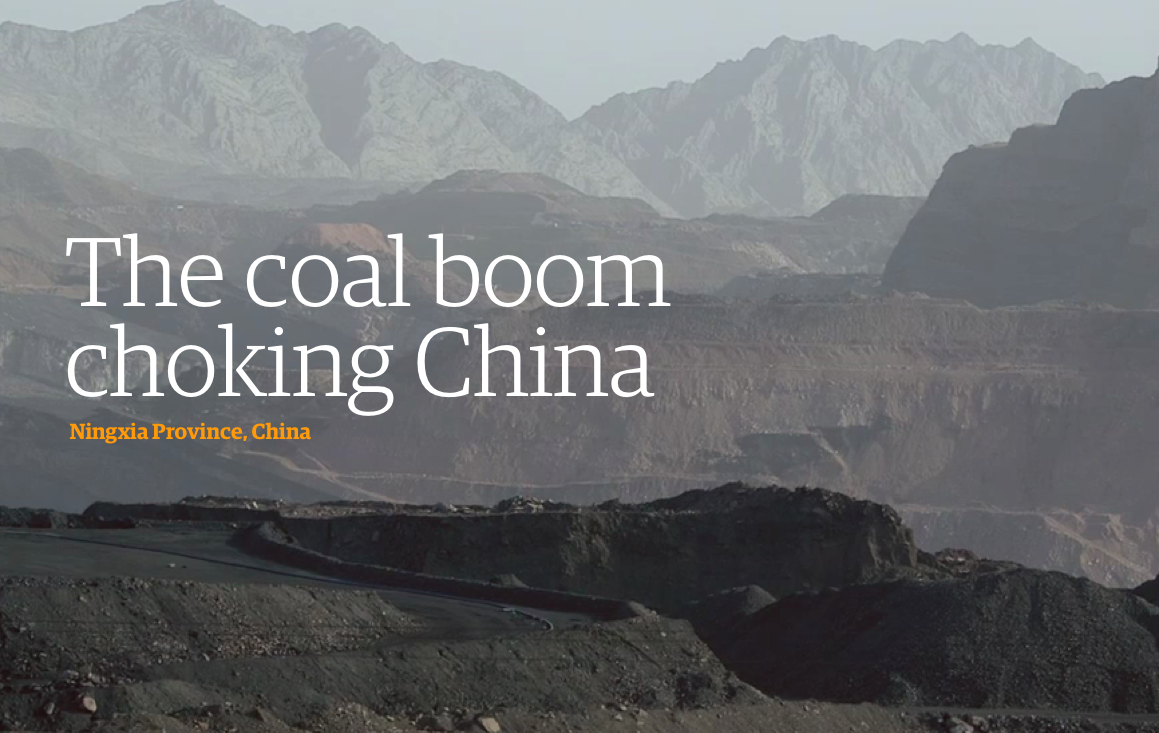 Our Climate Desk partners at the Guardian have published a beautiful—and terrifying—multimedia story from deep inside China’s coal belt. It’s the third installment in the paper’s ongoing “carbon bombs” series: investigations into giant fossil fuel projects from around the world that are super-charging global warming, or that have the potential to do so. Today’s deep-dive into China’s ravenous use of coal is eye-opening not only because it explores the long-lasting impact of burning coal on the nation’s health, but also because it illustrates the country’s outsized impact on global climate change through coal-related emissions. Here are some highlights from the Guardian story (which you should also check out for the gorgeous video and graphics):

1. “Chinese miners last year dug up 3.87bn tonnes of coal, more than enough to keep all four of the next largest users—the United States, India, the European Union and Russia—supplied for a year.” I’m always amazed by just how much coal China produces and consumes. Here’s how China’s coal production compared to other countries: 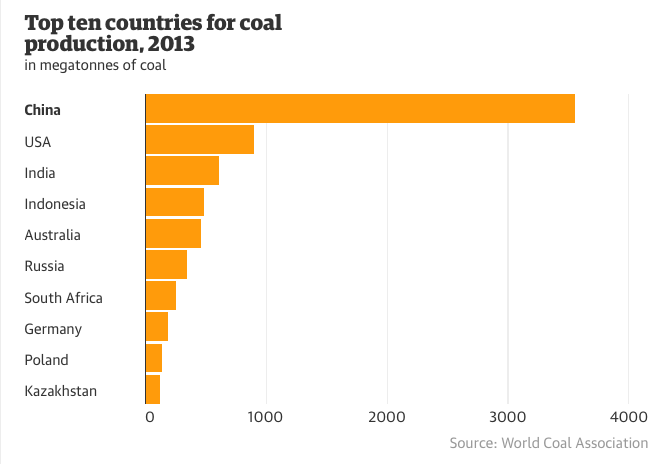 2. “Air pollution in China, from its factories and power stations, has got so bad that it kills over half a million people a year.” The impact of coal on China’s air is something my colleague Jaeah Lee and I witnessed first-hand when we traveled to through China for our investigation into China’s fracking boom. Potentially lethal smog stalked us everywhere we went, but especially bad was the coal belt around Shijiazhuang, where smog reaches emergency levels one out of every three days each year—twice as often as in Beijing.

If nothing is done to slash the levels of toxic smog in China’s air, some 257,000 Chinese people could die over the next decade from pollution-related diseases, according to a study released in February by Peking University and Greenpeace. According to a separate Greenpeace study, 90 percent of 360 Chinese cities surveyed failed to meet the country’s national air quality standard in the first quarter of this year. Forty percent of the cities registered air pollution levels that were twice the national standard. Toxic smog billowing from China’s coal-fired power plants is even making snowstorms in the US worse.

This video we produced during our investigation attempts to capture some of the consequences of China’s extraordinary dependence of coal and its impact on air quality and health:

3. “The fuel China dug up last year alone will produce around 9bn tonnes of carbon dioxide as it burns, more than all the coal used around the world in 1990.” Constituting 70 percent of China’s energy supply, coal has allowed China to become the world’s second-largest economy in just a few decades, hauling millions of people out of poverty. But the cost is being felt around the world in the staggering amount of carbon pollution China generates. Again, here’s a Guardian graphic showing just how much China outstrips the rest of the world in terms of carbon emissions, driven by its addiction to coal: 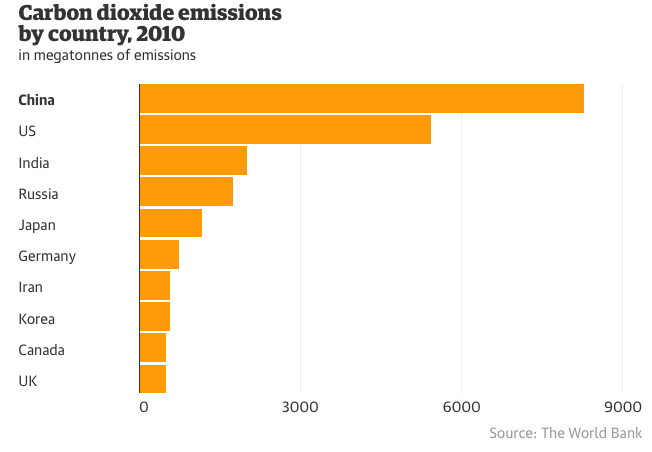 4. There was a drop in Chinese coal demand last year for the first in more than a decade. But China won’t be making permanent cuts to its coal use for years. Instead, the Chinese government has proposed slowing the growth of its coal use by 2020. That promise followed the historic climate deal between the US and China announced in November last year, in which China promised to peak its emissions around 2030.

5. The Chinese government accepted the scientific evidence for global warming years ago. This might seem like a small point, but it’s significant when you consider just how much climate denial has a grip on US politics. No such political resistance exists in China, and that means China “is pushing harder on more fronts than any other government on Earth to develop other sources” of energy, according to Atlantic China expert James Fallows, who spoke to us as part of our fracking investigation. China has an enormous amount to gain from throwing everything at solving the problem—and a lot to lose if it attempts fail, including the goodwill of its people, who are fed up with putrid air and the health impacts on their kids. The results of China’s embrace of the scientific consensus about climate change can be seen most clearly in its booming solar industry, as our peak inside one of the world’s biggest solar company reveals: