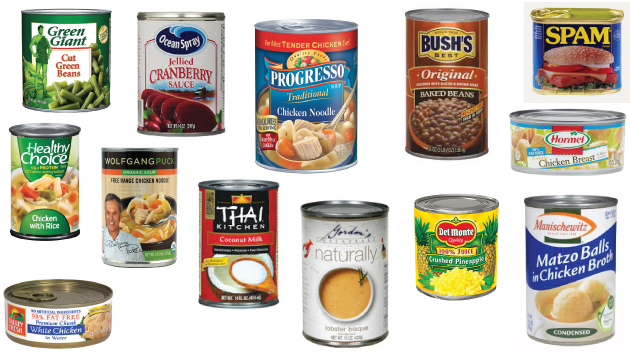 A recent report by the Environmental Working Group found these and other canned foods to be lined with BPA.

Heads up, canned-food eaters: A report released today by the Environmental Working Group details which canned food brands use bisphenol A (BPA) in the lining, and which don’t.

Most of us know BPA as the plastic additive that mimics the hormone estrogen and has been removed from things like water bottles and baby formula packaging. But BPA lines an estimated 75 percent of canned foods in North America, protecting the metal from corroding and preventing bacteria from getting in. This has environmental advocates concerned, because the chemical leaches into the contents of cans at far higher rates than it does into, say, the water in your water bottle.

A 2011 Harvard study found that those who ate canned soup every day for five days had levels of BPA in their urine that were ten times those who had fresh soup. Another study from the same year found BPA in 71 out of 78 canned food samples, with concentrations varying drastically between food types and even within the same product. The Food and Drug Administration maintains that BPA is “safe at the current levels occurring in foods,” though scientists have linked low-dose, long-term exposure of the chemical to to breast cancer, changes in the reproductive system, and other health problems. 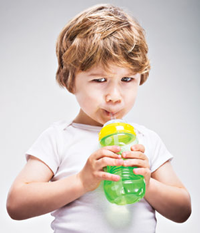 There isn’t as much research on canned beverages, like beer or soda, but existing studies have found that the contents don’t tend to interact with the lining in a way that leads to leaching. Also less concerning, at least at the moment, are Tetra Paks—the cardboard cartons lined with aluminum and polyethylene, a different kind of plastic. The liner isn’t known to cause cancer or disrupt hormones.

The report released today by the Environmental Working Group (EWG) shows the results of a survey of 252 canned food brands. Of the companies that answered, a little more than half reported using BPA lining in all canned products, and another 24 percent use BPA in some products. The companies that use BPA in all their canned products, listed below, include familiar brands like Progresso, Hormel, Green Giant, Ocean Spray, Wolfgang Puck Organic Soups, and Manischewitz. 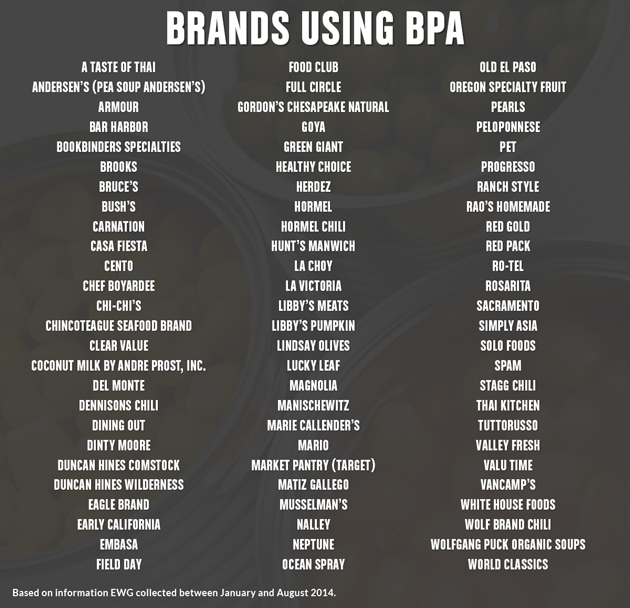 The EWG report also found that 31 brands use BPA-free linings for all their products. But before we get to those brands, it’s worth noting that some BPA replacements may not be any better than BPA itself.

“We can tell you that BPA is definitely toxic,” says Renee Sharp, research director at EWG. “What we can’t tell you is exactly what people are shifting to, or really what the impact of those chemicals are.”

Some BPA replacements are also hormone disrupters that have similar effects to BPA. (For more on the health impacts of BPA-free plastics, check out my colleague Mariah Blake’s stellar feature on the subject.) Existing natural substitutes, like oleoresin (a combination of oil and the resin of plants) don’t always hold up for storing more acidic foods, like tomatoes.

In its recommendations to consumers, the EWG suggests subbing in fresh, frozen, or dried food for canned food; purchasing food in alternative packaging, like glass; and, if canned food is unavoidable, never heating food in the can.

With that said, here are the brands that the group found to use BPA-free lining in all canned goods: 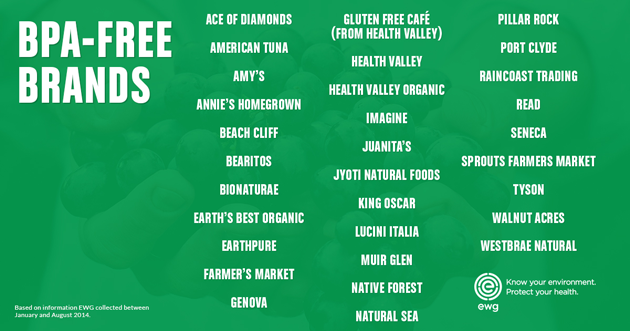