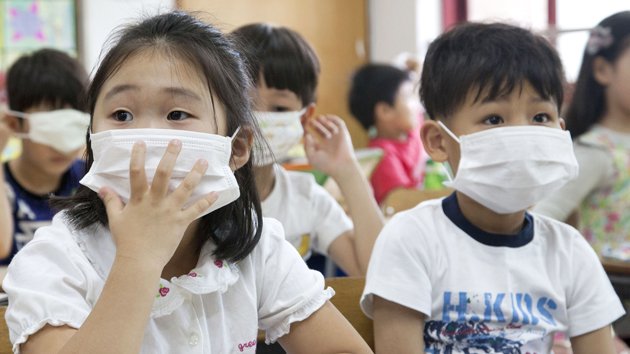 More than 2,800 people remain under quarantine in South Korea as an outbreak of the Middle East Respiratory Syndrome (MERS) continues to spread. With 95 confirmed cases and nine deaths, this is the second largest outbreak of the mysterious virus—the first was the initial one in Saudi Arabia in 2012. Since then, around 85 percent of cases have occurred in the Middle East, but MERS has been documented in 25 countries, including two cases in the United States last year. Now, health officials in the United States and abroad are preparing for the possibility that the disease could spread even farther. Here’s what we know so far:

What is MERS?
MERS primarily affects the respiratory tract. Typical symptoms include shortness of breath, coughing, and fever (but some have also reported diarrhea, vomiting, and even kidney failure). It is caused by a coronavirus, a family of viruses that generally produce mild symptoms associated with the common cold. The coronavirus behind MERS (MERS-CoV), however, is different from the rest—and far more dangerous. With a 40 percent fatality rate, it has killed about 450 people since it was first discovered in 2012.

Despite the high mortality rate, the virus isn’t highly contagious and is considered less infectious than similar diseases like SARS.

How does it spread?
MERS, which can affect both humans and animals, is believed to have originated from bats, but health officials trace the first human case, in Jordan, to an infected camel. They don’t yet know exactly how that happened, but the World Health Organization has advised against the consumption of raw camel milk and camel urine—yes, camel urine— as a protective measure. While sick camels are considered the primary source of animal-to-human transmission, experts believe that most human cases spread through close contact with infected people, as the majority have been clustered within health care facilities. Symptoms typically appear between five days and two weeks after exposure.

Mers is believed to have originated from bats, but experts trace the first human case to an infected camel.

Until more is known—and because MERS symptoms are often initially confused with less serious illnesses—experts have issued the usual recommendations for people living in or traveling to affected areas: Wash your hands, try not to hang around sick people, and don’t touch your eyes, nose, or mouth without disinfecting first.

Who’s at risk?
The virus hasn’t made an appearance in the United States since last year, when two health workers contracted the disease while traveling to the Saudi Arabia. (Both made full recoveries.) But MERS has continued to spread rapidly since then, and the Centers for Disease Control and Prevention (CDC) has cautioned that we may see new transported cases in the coming months. While travel restrictions haven’t yet been issued, the WHO encourages extra hygiene measures for anyone going into affected areas, especially when visiting hospitals or places with camels.

The WHO reports that those with already weakened states of health, including anyone with diabetes, renal failure, chronic lung disease, or compromised immune systems, are most at risk for serious complications and death, but in large outbreak areas like South Korea, the virus has affected many people who are otherwise healthy.

What’s being done to stop it?
There is no vaccine or cure for MERS, and the South Korean health care system has faced criticism for overcrowding in hospitals that may have hastened the virus’ spread. But South Korean officials are taking drastic measures to contain both the spread of the disease and the associated fears. 2,000 schools have closed, and government officials are enforcing quarantines for people who might have been exposed even if they don’t have symptoms and are monitoring potentially infected people via their phones.

Meanwhile, a team of WHO experts and public health officers, who have been working in outbreak areas of the Middle East, have deployed to South Korea to learn more about the virus. So far they have confirmed that, despite initial fears that MERS had become more contagious, it hasn’t mutated much from the original strain found in the Middle East.

The WHO is also ramping up its symptom surveillance and reporting, training health officials, and conducting risk assessments to try to stop MERS outbreaks from happening in other areas around the world.

The CDC, which has been preparing since the last time MERS made its way into the United States, has increased lab capacity to detect the virus in those who might come into contact with infected travelers (like flight crews, airport medical service units, and customs agents).