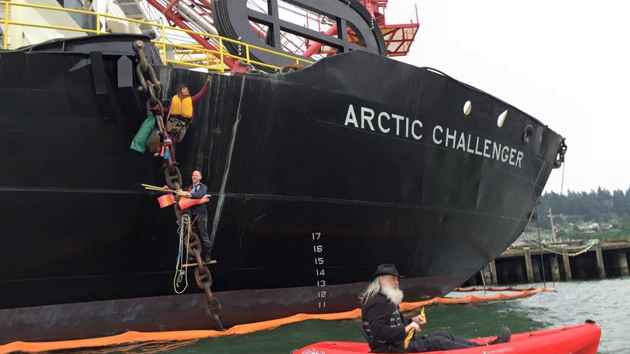 As Royal Dutch Shell prepares for its summer Arctic drilling plans, environmentalists, indigenous communities, and concerned citizens alike are ramping up their efforts to stop it. Last month, “kayaktivists”—that is, activists in kayaks—surrounded one of Shell’s oil drilling rigs while it temporarily docked in the Port of Seattle, and earlier this past week, a group of environmentalists and native Alaskans challenged the sufficiency of the operation’s environmental analysis in the federal court of appeals.

But over Memorial Day weekend, two environmental activists took things to a new extreme, literally putting their bodies between Shell’s operation and its destination in Alaska’s Chukchi Sea. On the evening of Friday, May 22nd, Chiara Rose D’Angelo, 20, climbed onto the anchor of the Arctic Challenger, a support ship for Shell’s exploratory drilling operation, docked 90 miles north of Seattle in Bellingham Bay, in an attempt to prevent it from leaving for the Arctic. The next morning, Matthew Fuller, 37, joined her.

“The Arctic is an extremely sacred place,” D’Angelo told me. “I did it because it’s extremely important that we protect the remaining natural food sources that we have. As long as there is something to do about it, I’ll do it.”

It turned out that the ship did not leave right away, and Fuller ended up dangling from the anchor chain for 22 hours, while D’Angelo stayed on for 63 hours—nearly three days. The two may be facing financial repercussions, as well. While the US Coast Guard did not force them to get off of the ship, on Thursday they mailed D’Angelo, Fuller, and two others penalty notices for violating a 100-yard safety zone around the ship that could amount to as much as $40,000 in fines per person.

While dealing with the fallout of their protest, Fuller, a graduate student at Evergreen State College in Olympia, Wa., and D’Angelo, an undergraduate student at Western Washington University in Bellingham, Wa., spoke to me separately about their time on the Arctic Challenger. I combined their responses and edited them for clarity and length below:

Mother Jones: What led up to your decision to get on the Arctic Challenger?

Chiara Rose D’Angelo: I had no intention of chaining myself to the Arctic Challenger until about two days beforehand. [A group of local students and community members] had organized an emergency kayak flotilla because we found out that the Arctic Challenger was set to leave at any time, that it had all the supplies it needed and they were loaded up and ready to go.

It made the most sense physically for me and just my position and my stage of life.

So we go out there and we do a beautiful kayak flotilla. But it didn’t feel like enough, and we got home and me and my friends were talking about it and we were like, we have to do something else. If we were going to have any chance at stopping it from leaving, we couldn’t do a flotilla because it could leave in the middle of the night and we didn’t have the kind of capacity to get 20 boats out there in the middle of the night.

So what’s the other option? The other option is a person going out and attaching themselves to the boat. We had all been talking about it and then I was like, okay, well, I’m actually really down. It made the most sense physically for me and just my position and my stage of life.

Matthew Fuller: [That Friday] I was in Seattle, and I got word that someone had affixed themselves to the anchor chain [of the Arctic Challenger]. I drove up to Bellingham and got into town around 12:30 AM and pretty much just dropped my stuff off at my house up there and went down to the beach…because i knew that Chiara had been up there for six hours or something at that point.

By 3:00 AM, i decided that if there is a way for me to get out there I was going to go out there and be on the anchor chain, too. And then about 6:00 or 6:30 we took a boat out there to grab [a friend who had been up there with her] and to swap me out there.

MJ: What were the logistics of getting onto the ship?

CRD: We found this blow up dinghy, the kind that you buy at a superstore that you can pump up. We go out and we are paddling as hard as we can but we are not really making any progress because of the waves. So we get all the way out there [about 1,000 yards from shore], and we were like I think we should just go for it, so I have the two people move me over to the chain and I jump onto the chain and the boat slips away. I strapped myself in and I fall back onto the webbing which is wrapped with a carabineer attached to my belt and I’m on the chain. So I have one point of safety. And then I climb up a little bit and I attached myself again and I have two points of safety. 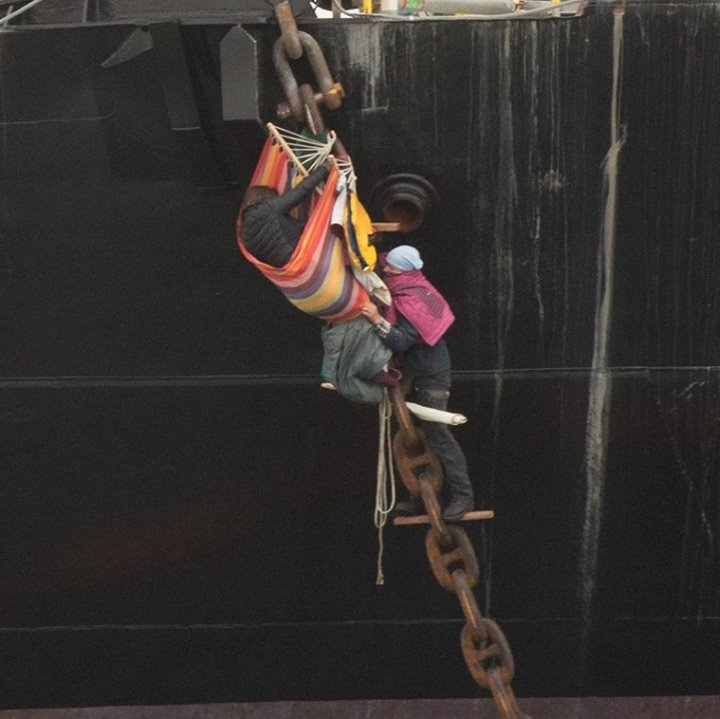 MJ: What did you eat?

MF: The idea was to eat as little as possible and still be nourished. Chiara didn’t have a bowel movement while she was up there and I didn’t have a bowel movement while I was up there. I wanted to make sure my blood sugar was fine and that I had enough energy, but for the most part you are just dangling and not really burning calories. As long as you keep warm, a lot of it was just being sloth-like on the chain.

MJ: How did you get supplies out there?

MF: We had a bunch kayaks like four or five and a small motor boat [based at a nearby beach]. Basically what would happen is decoys would try to distract the Coast Guard by infringing on the safety zone. The Coast Guard would go and talk to those people, and then out of nowhere, a boat would come speeding as quickly as it could and I would be dangling off of the line and climb down and barely reach down to grab the supplies tossed to us seconds before the Coast Guard saw. That happened several times, and it was really nerve wracking.

MJ: How did the Coast Guard treat you?

MF: They weren’t threatening, they were definitely playing good cop. But at night they came to check up on us, and they would shine bright lights and try to talk to us and make sure that we were cognizant, and not loopy or anything. They were friendly enough but it also would wake you up every time. Any time I would shift my body or re-position myself in the middle of the night, wherever the boat was, I would have a bright light shined on me. It was apparent that they were watching us with their night goggles or whatever. 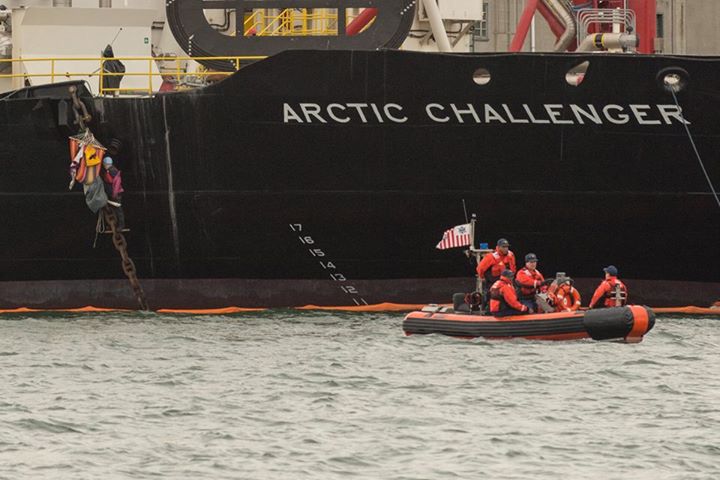 MJ: Were you in pain?

CRD: It was definitely one of the most excruciating nights of my life, like I’ve never been in such deep physical suffering before and hopefully never will be again.

Wrapped around my legs I had these straps for the harness that I was in. And the harness was what was holding me up. It was very, very uncomfortable. Imagine if you are going on a bike ride and your butt hurts at the end, that was like the feeling at the beginning, and then the whole time was just that feeling over and over again.

MJ: What would you do to pass the time?

CRD: I would breathe really deep, I would move my body,  I would try to dance it out, I would do stretches, I would change positions a lot, I would climb up and down the chain; I tried everything.

In order to talk to my body and make it okay, how physically uncomfortable it was, I would tell my body that I’m coming down soon; it was almost like having to lie to myself.

MF: We sang a lot, we kept trying to come up with really punny songs, like ‘Working on the Chain Gang.” We talked about relationships and boys and girls, what it’s like to be in love and be infatuated.

And we had a lot of visitors, like fish and sea lions, especially when we’d sing. It was really cool.

MJ: Why did you finally get down? 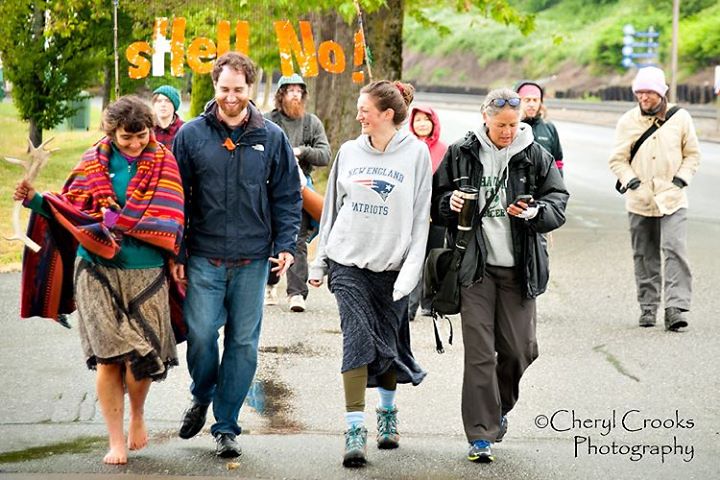 Chiara Rose D’Angelo, far left, walks with supporters to a rally after coming down from the Arctic Challenger. Cheryl Crooks

MJ: The Arctic Challenger took off last Friday, what do you think about that?

MF: The window for drilling up there is 100 days. Every single day that these ships and this infrastructure is in Puget Sound ports and delayed from getting to Alaska is another day that they can’t implement their plans for Arctic drilling. We feel like the action was a success and we feel like possibly we did delay the departure by several days. That’s something that we just wouldn’t have access to knowing, Shell is not going to tell us.

CRD: I’ve got a vision. I’m feeling not as down as people would assume. I tend to keep very positive. There are things that bug me and break my heart happening every single day on this earth; if I let everything that was negative that happened get me down I wouldn’t be a very positive person, and I probably wouldn’t have very much activism left in me. Things happen, and you keep going, you keep positive, and you do what you can in every single moment and that’s all that I can ask of myself.