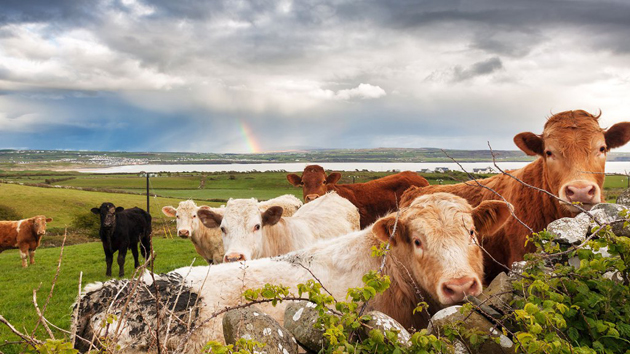 This story was originally published by Grist.

Should we eat meat? That’s the big question, which—for this series—I’m asking three different ways: in terms of environmental sustainability, morality, and practicality.

Today, to begin: Can meat be sustainable?

In any comparison of the environmental impact of meat eaters and plant eaters, we have to start by noting that plant eaters have a powerful ally on their side: physics. Every time energy moves from one state to another, a little is lost along the way. Flip on an incandescent bulb and only 8 percent of the electric energy turns into visible light—the majority of energy is lost as infrared light and heat. Convert the calories in corn into meat by feeding a chicken, and you’ve got the same problem.

In even the most efficient, high-tech farms, it takes a pound and a half of grain to grow a pound of chicken—because that chicken is constantly radiating heat and burning energy to move around. The picture gets worse if you just look at the parts of the chicken that people like to eat. The scientist Vaclav Smil, who has a reputation for objective number-crunching, considered this basic issue of thermodynamics in his book, Should We Eat Meat? Evolution and Consequences of Modern Carnivory, and came up with this table: 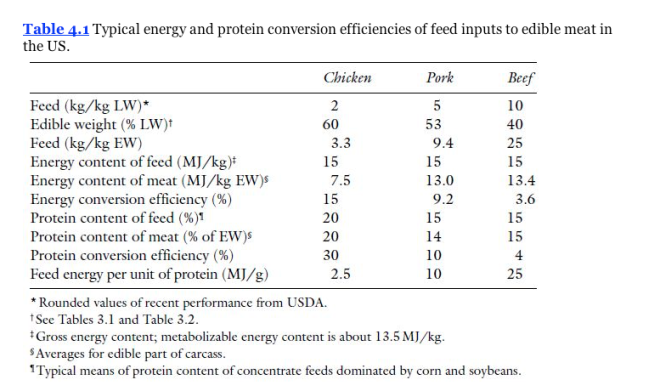 This efficiency problem puts meat eaters way behind from the beginning, and it extends from energy to every other resource. Look at water use, greenhouse gas emissions, pollution, land-use footprints, and just about anything else, and it’s always going to make more sense to grow grains for people to eat rather than for animals to eat. To take just one example, scientists looked at the amount of nitrogen fertilizer that flows into rivers and creates dead zones in oceans: They calculated that a kilogram of red meat put an average of 150 grams of nitrogen equivalent (in various fertilizers) into waterways, versus 50 grams per kilogram of chicken and less than 3 grams per kilogram of grain.

This idea, that meat is environmentally unfriendly, has been the conventional wisdom since 2006, when the UN’s Food and Agriculture Organization published a report called Livestock’s Long Shadow. Which is why I was surprised when Frank Mitloehner, a UC-Davis animal science professor who is leading an update of the FAO’s livestock assessment, told me that the idea of eliminating animals from our food system was ridiculous and, actually, unsustainable.

“Agriculture cannot be sustainable without animal agriculture,” he said. “That is something I’m sure of.”

There are two key points to consider, Mitloehner said. First, most of the feed that livestock eat is not edible by humans. Globally, just 18 percent of animal feed is made up of grains or other crops that people might otherwise eat. The rest is crop residues, grass, and waste from milling grain and other food processing. And so, despite the inefficiency of converting calories to meat, animals are able to give humans access to energy that they wouldn’t have been able to access otherwise. 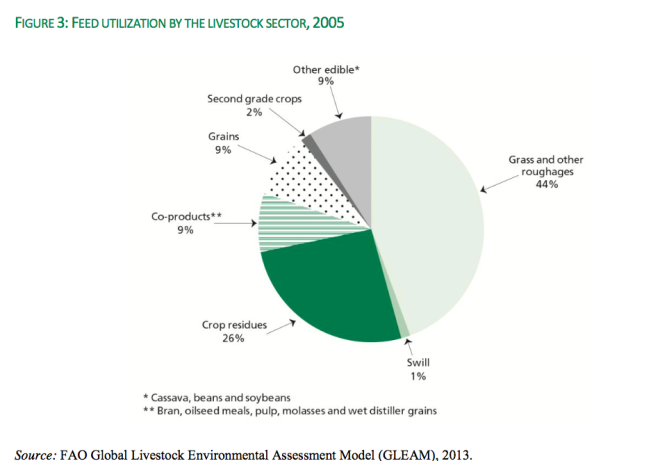 The second, issue, Mitloehner said, is that what I’d been thinking of as the “waste products” of animal agriculture are actually valuable resources. The manure animals produce is vital for agriculture (especially organic agriculture). “If we were to reduce the fertilizer animals produce by 100 percent, we would have to double or triple the amount of chemical fertilizer we apply, and we just don’t have that,” Mitloehner said.

In addition, every part of the animal that we don’t eat as meat—the skin, bones, sinew, organs, and fat—is used in some way. The artist Christien Meindertsma demonstrated this beautifully with her book Pig 05049, in which she followed every part of a slaughtered pig to its final use. Extract from pig hairs are used in baking bread, bone ash is a key part in train brakes, gelatin is used to filter your beer, elements from blood are used as edible food glue—Meindertsma found 185 products in total. If we were to eliminate animal agriculture, we’d have to find new supply chains for these things, and each would come with its own environmental footprint.

Livestock is especially important to poor farmers. Animals are often a key part of the agro-ecological system and provide high-quality nutrients to the people most likely to go hungry—more frequently in the form of dairy than meat. In some of the poorest areas of the world, people need cattle because manure is their only source of fuel. In his book One Billion Hungry: Can We Feed the World?, Gordon Conway lays out the benefits of livestock animals, which can be easy to forget when you’re rich and comfortable:

But anyone reading this probably is relatively rich and comfortable—at least rich enough that it may be a bit mindboggling to think you might need a cow so you could burn its dung for energy. For those of us living with easy access to energy and cheap calories, would it make ecological sense to reduce our meat consumption? Probably.

I called up Rattan Lal, one of the world’s leading soil scientists, to ask him what he thought about meat eating. I wanted to talk to him because there’s been a lot of excitement about the idea that cattle grazing on grassland could actually be carbon negative—that is, we might need more animals, not less, to combat climate change.

Lal, director of the Carbon Management and Sequestration Center at Ohio State University, had told Washington Post journalist Tamar Haspel that we shouldn’t expect cows to save the world. Haspel wrote:

He says one metric ton per hectare is a reasonable estimate of the maximum [carbon] that grazing can sequester in a place like Ohio, where growing conditions generally are favorable, and a half-ton would be more realistic in drier areas. He supports grass-fed beef but says carbon sequestration “can’t completely compensate for the greenhouse gases in beef production.”

I wanted to double check—was there anything else? Some way that animals are crucial for soil health? When I spoke to Lal, he said it just came down to basic logistics. “In the next 40 years, there are 2.3 billion people coming to dinner. We have invited them—they haven’t made the choice to come. It is our moral duty to insure that they are well fed. The luxury of having so much meat as we do in the U.S. will become less and less feasible as population grows.”

The French eat 35 pounds a year, while Americans eat 270 pounds of meat.

Animals are a key part of the agricultural system, but the people who eat the most meat—the rich of the world—almost certainly need to eat less to make the global food system sustainable, especially as billions rise out of poverty and begin demanding their share.

Smil came to the same conclusion. He says that we should aim for an average of 33-66 pounds of meat per year. The French eat 35 pounds a year, while Americans eat 270 pounds of meat. If we got down to the French level, Smil’s calculations suggest that everyone around the world could have their share of meat, and we could still reduce the farmland used to grow feed from 33 percent of all cropland to 10 percent—with huge environmental benefits.

So can meat be sustainable? The answer, based on the evidence I was able to assemble, seems to be: Yes, but only in moderation. And because we are currently eating so much meat, those who give it up altogether are probably making the most environmentally friendly choice of all.

Next, I’ll tackle the morality of meat eating. And then I’ll turn to what’s probably the most important question of all: It’s fun to debate what we should do, but it’s more important to figure out what we can do, realistically. So after looking at morality, I’ll look at the most pragmatic ways to improve meat production.