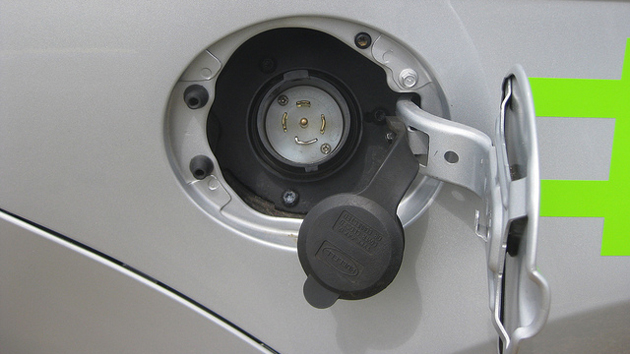 This story was originally published by City Lab and is reproduced here as part of the Climate Desk collaboration.

The idea that gasoline cars might cause less environmental harm than electric vehicles seems impossibly backwards. But consider the following thought experiment before you dismiss it out of hand.

A view from the tailpipe gives EVs a clear edge: no emissions, no pollution, no problem. Shift the view to that of a smokestack, though, and we get a much different picture. The EV that caused no environmental damage on the road during the day still needs to be charged at night. This requires a great deal of electricity generated by a power plant somewhere, and if that power plant runs on coal, it’s not hard to imagine it spewing more emissions from a smokestack than a comparable gas car coughed up from a tailpipe.

So the truth of the matter hinges on perspective—and, it turns out, geography. That’s the sobering lesson from an incredibly sophisticated new working study by a group of economists. Using a fine-grained, county-level measure of U.S. vehicle emissions traced to tailpipes and electricity grids, the researchers mapped where gas cars and EVs cause more respective pollution. In some places electrics do so much relative harm that instead of being subsidized, as is currently the case, they should actually be taxed.

“What we find is that the benefits are substantially different depending on where you are in the country,” study co-author Stephen Holland of the University of North Carolina, Greensboro, tells CityLab. “The real big take-home message is: location, location, location.”

If not, here are some additional details. The researchers focused on five major pollutants: carbon (CO2), sulfur dioxide (SO2), nitrogen (NOx), particulate matter (PM 2.5), and volatile organic compounds (VOCs). They considered 11 different 2014 models of EVs, as well as the “closest substitute” gas car. Whenever possible they used an exact equivalent, as with the Ford Focus, which comes in both electric and gas-powered versions.

For gas cars, calculating environmental damage was pretty straightforward. The researchers considered factors like a car’s fuel-efficiency rating (city miles for urban counties, highway miles for non-urban), pollutant dispersion (such as average wind patterns), and number of environmental damages (to health, infrastructure, crops, and so on). Together that data gave them the aggregate emissions of driving a certain gas car one mile in a given US county.

Determining the comparable damage from electric vehicles was a bit trickier. Here they used an EV’s fuel-efficiency equivalent (kilowatt-hours per mile) to figure out how much electricity it drew from a regional grid. They also knew the hourly emissions profiles for the five target pollutants at 1,486 power plants across the US. So for each county they knew how the grid responded when an EV plugged in, which told them how much environmental damage that car produced at the power plant.

The researchers then converted all their damage estimates into dollar values. And voilà: the environmental cost of driving a mile in an electric and a gas car alike.

Estimated damages for gas (left) and electric (right) cars by US county; the damages range from roughly 1 to 5 cent(s) per mile on each side, green to red. Holland et al, 2015/NBER

The above maps show the environmental damages by county for a 2014 gas (left panel) and electric (right) Ford Focus. For the gas car, the worst damage—shown in red, at upwards of five cents a mile—tends to occur in highly populated urban areas. That makes sense, because that’s where tailpipe emissions can do the most immediate social harm. The cleaner green areas were closer to a penny a mile in damage.

For the electric Focus, environmental damage was far more regional. In the West, where the power grid tends to be clean, electric vehicles did little damage (again, about a cent a mile). But in the Midwest and Northeast, where the electricity grid tends to rely on coal power plants, the damage from emissions ranged back up toward five cents a mile. Texas and the South were in the middle of the pack.

“It just turns out the West is a lot cleaner than the East,” says Holland.

Within these broad trends there’s considerable nuance. Some places, like Los Angeles, are big EV winners. The city’s air shed traps pollutants from gas cars, leading to local smog; meanwhile, electricity is drawn from a clean grid in places like Nevada, so the environmental damage is both remote and minimal. On the flipside you have a typical county in South Dakota, where gas cars are relatively cleaner. There the damage done by pollutants on the sparse local population is minimal; electricity, drawn from coal-fired plants in denser places like Illinois, is dirty by comparison.

In between these two extremes are two types of places that more or less break even. Take New York City. There, both gas cars and EVs produce harmful emissions: tailpipes hurt the dense local population, but the coal-powered smokestacks in moderately dense parts of Central Pennsylvania do similar damage. A place like rural Nevada, meanwhile, falls into balance for different reasons: gas cars don’t have a huge impact because there aren’t many people, and EVs don’t have a huge impact because the energy grid is fairly clean.

The map below shows the subsidy calculations by county: those in dark green merited subsidies of up to $5,000; those in dark red deserved a tax upwards of $5,300. 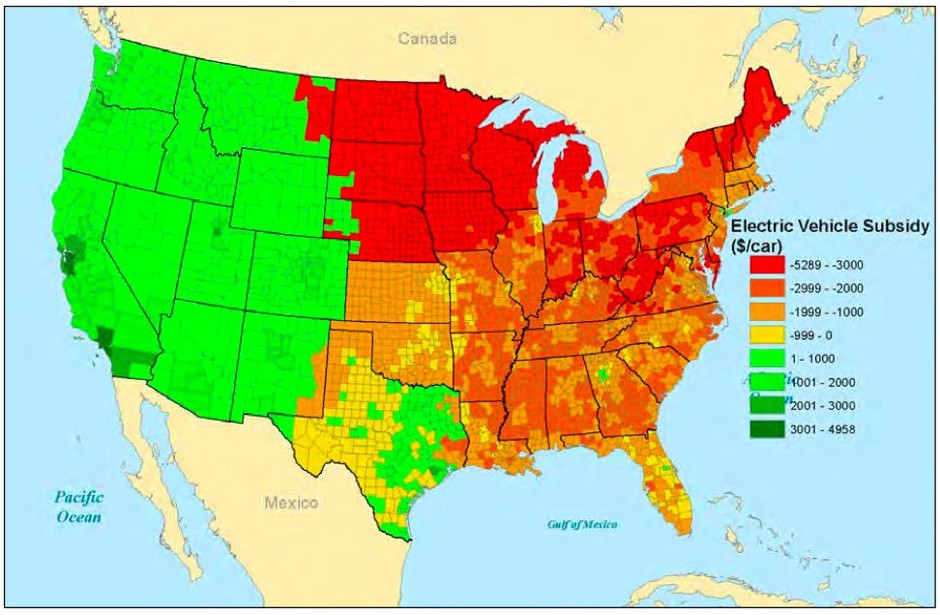 Again we see a clear geographical division. Metro areas in California performed best, with those in the Midwest doing the worst. Areas where EVs deserved significant subsidies included Los Angeles ($4,958), San Francisco ($3,086), and San Diego ($2,986). Dallas ($1,144) and Houston ($1,140) also fared well. Still, even in Los Angeles, where the environmental benefits of an EV relative to a gas car were highest, the calculations didn’t warrant the current federal subsidy of $7,500 per car.

“So even in the most extreme areas, the existing subsidy—let alone the additional state incentives—are not justified by the environmental benefits to air pollution,” says Holland.

Elsewhere around the country, EVs showed few if any benefits relative to gas cars. At a subsidy of $184, metro New York was essentially a wash. And in many metros, EVs actually produced more environmental damage than gas cars: Atlanta (-$314), Chicago (-$900) and D.C. (-$1,077), among them. Those negative figures indicate that EVs should be taxed, rather than subsidized. In non-urban counties that tax rose to an average of $2,200, and in parts of the Midwest it neared $5,000 per car.

On average, a US county warranted an EV tax of $742. “If we were just setting a national subsidy or tax on the purchase of EVs, then our calculation shows that should indeed be a tax instead of a subsidy,” says Holland.

The findings show the difficulty of establishing a meaningful blanket federal subsidy for electric vehicles. Simply put, not every place benefits from EVs the same. Complicating matters is the fact that the vast majority of EV damages (91 percent) are exported to another state, via the emissions generated by power plant located elsewhere. Here’s what a state-level subsidy map looks like when all damages are considered; only 12 states (in green) warrant a subsidy instead of a tax: 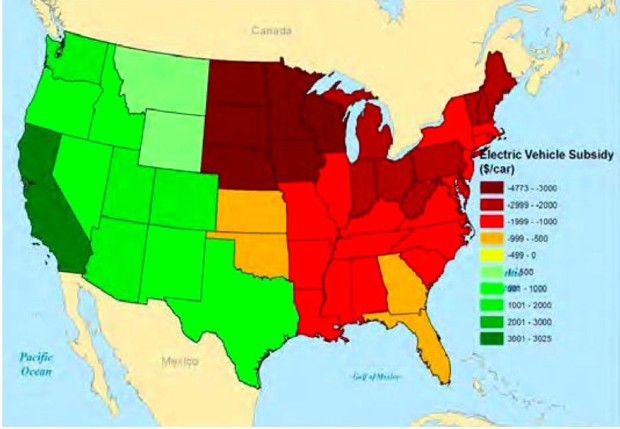 What else to consider

The point is not that gas cars are good and EVs are bad; if anything, it’s a reminder that there’s a high social cost of driving everywhere—especially in cities.

The study’s biggest caveat, acknowledged by the researchers, is that they don’t consider a full “lifecycle” analysis of emissions—so things like making the car, drilling for oil, or transporting coal aren’t included in the environmental costs. Some previous work has found that EVs are cleaner than gas cars when you consider the totality of impacts; others have found that’s only true if the power grids that charge EVs are also clean.

Another criticism is that EVs aren’t about the present, they’re about the future. Assuming electricity grids will get cleaner, moving away from gasoline cars is the only way to approach a zero-carbon transportation sector (not to mention avoiding the political costs of oil dependence). Holland counters that rising fuel-efficiency standards are making gas cars a lot cleaner, too. And if it’s really all about the future, he says, let’s subsidize car research instead of car purchases.

Holland knows that by running so counter to conventional wisdom this work will trigger high emotions. (“We’ve seen message boards where people are saying all kinds of mean things about us,” he says.) At the end of the day, though, he wants people to appreciate that the EV-versus-gas car debate is a very complicated one—and that geography has a key role to play as far as policy is concerned.

“I’m kind of an all-of-the-above person on this,” he says. “There will be a niche for gasoline cars, but our calculations show there are substantial benefits to electric vehicles in some places.”