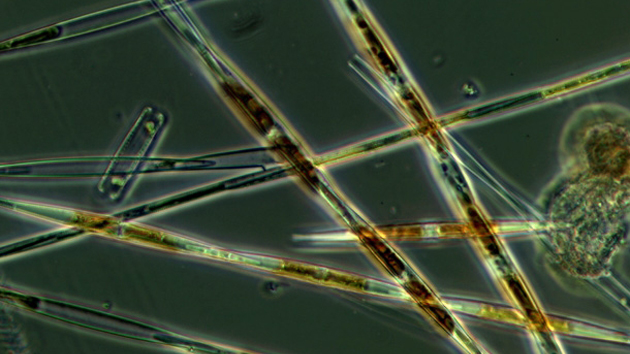 Cells of pseudo-nitzschia, a type of algae that's producing neurotoxins in the Pacific.NOAA

From the air, the Pacific algal bloom doesn’t look like much of a threat: a wispy, brownish stream, snaking up along the West Coast. But it’s causing amnesia in birds, deadly seizures in sea lions, and a crippling decline in the West Coast shellfish industry. Here’s what you need to know about it, from what this bloom has to do with the drought to why these toxins could be a real threat to the homeless.

“These are the highest levels of toxicity we’ve ever seen,” says one expert.

What’s causing it? The culprits are single-celled, plant-like organisms called pseudo-nitzschia, a subset of the thousands of species of algae that produce more than 50 percent of the world’s oxygen through photosynthesis. They’re a hardy variety usually found in cool, shallow oceans, where they survive on light and dissolved nutrients, including silcates, nitrates, and phosphates. “They’re sort of like the dandelions of the sea,” says Vera Trainer, who manages the Marine Biotoxin Program at the Northwest Fisheries Science Center in Seattle. “They’re always there in some low numbers, just waiting for nutrients to be resupplied to the ocean’s surface.” In most years, blooms in the eastern Pacific are contained near “hot spots” that dot the West Coast—relatively shallow and sheltered places like California’s Monterey Bay or the Channel Islands. They usually flare up in April or May as trade winds cycle nutrient-rich waters from offshore depths to the coast in a process called “upwelling,” but they fade after only a few weeks.

Why is it sticking around so long? The jury’s still out, but scientists are beginning to get a clearer idea. These past few years have been “incredibly weird” in the northeast Pacific, says Nate Mantua, a research scientist at the National Oceanic and Atmospheric Administration’s Southwest Fisheries Science Center in Santa Cruz. He points to the same “ridiculously resilient ridge” of high pressure that’s been causing the historic drought in the western United States: This pressure also resulted in a pool of exceptionally warm water in the Pacific (known as “the blob”), with little weather to disperse it. Those conditions, along with prevailing winds and colder currents that ferry nutrients back to the coast, seem to be supplying the algae with a seemingly endless feast.

That makes the source of this bloom different from its cousin in the Gulf of Mexico, where fertilizers flowing from as far as Iowa are feeding a zone of algae that’s as large as New Jersey. “We’re seeing them in relatively pristine waters of the US West Coast,” Trainer explains, though she adds runoff and sewage discharge may be playing some role in the blooms off Southern California.

So just how big is this thing? Bigger than researchers have ever seen: a patchy stream that stretches from Southern California up along the Alaskan coast. The hot spot blooms that appear each spring are merging for the first time, Trainer explains. Though the combined mass has ebbed and flowed over the past four months, it hasn’t let up; her team finds algae each time they journey out to sea, with no signs of abatement soon. And it’s also unusually potent. “These are the highest levels of toxicity we’ve ever seen,” says Raphael Kudela, a professor of ocean sciences at the University of California-Santa Cruz. “It’s a truly extraordinary phenomenon.” 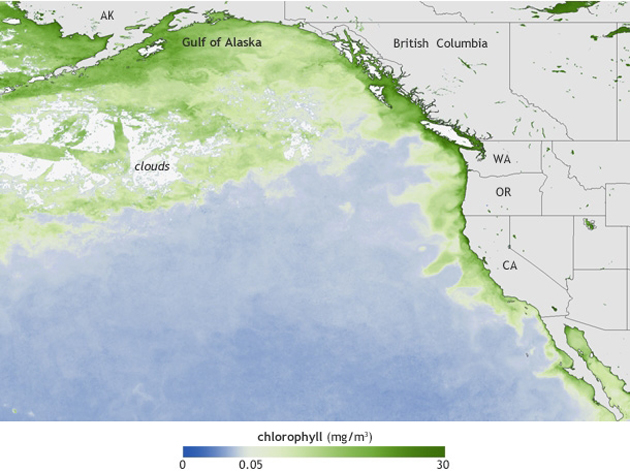 Levels of chlorophyll, viewed from space, indicate where algae is present in the waters of the Pacific. NOAA

How deadly are these “dandelions”? The algae produce a compound called domoic acid, a type of amino acid that leads to a condition commonly known as “amnesic shellfish poisoning” in humans. Shellfish and some small fish, like sardines and anchovies, feed on the algae and concentrate the toxin in their flesh. When animals further up the food chain—like birds—eat those fish and shellfish, the domoic acid seeps into the bloodstream and eventually the brain, where it attacks cells in the hippocampus, the brain’s command center for memory and learning. The result: amnesia-stricken birds that will repeatedly fly into windows, and sea lions that writhe on the shore, plagued by seizures. Both are symptoms of rapidly firing neurons in the hippocampus, which will eventually burn out and kill the animal. Beaches have been littered with dead fish, birds, and sea lions up and down the Pacific coast since May—all the way up to Alaska, where NOAA is investigating the deaths of fin whales in connection with the toxin.

Will it kill me? Probably not. Amnesic shellfish poisoning was discovered in 1987, when what was then a mysterious illness killed three people and sickened 105 more on Prince Edward Island, Canada. But cases since then have been rare. That’s due to a bevy of regulations that shut down recreational shellfish harvesting when toxicity spikes and require commercial shellfish operations to test each batch for toxins. Those moratoriums have cut into Washington’s $84 million crab industry, while a ban on recreational clam digging has hurt smaller, more remote communities, particularly in the Pacific Northwest. Trainer points to indigenous regions in coastal Washington, like the Quinault Indian Nation, where many members make ends meet by harvesting razor clams for healthy meals in the winter. Though fish are also tested, the toxins seep into their guts, which don’t usually find their way to the dinner table.

Homeless people looking to shellfish as a free meal could be inadvertently exposing themselves to the toxins.

Researchers are also investigating what low levels of domoic acid can do to the brain over many years of exposure. Trainer cautions that the mild symptoms of low-level contamination mean most people wouldn’t be aware of the problem: “They might think they have a cold, or a little flu,” she says. Results from an ongoing inquiry into the effects of domoic acid on Native Americans in the Pacific Northwest have found evidence of memory and learning impairment, while studies in sea lions found antibodies for domoic acid, suggesting even low-level contamination can cause an adverse physiological response. Kudela also suggests that the homeless around Monterey Bay, where his team is located, could be looking to shellfish as a free meal, inadvertently exposing themselves to the toxins.

What happens next? Researchers are waiting for this fall’s big coastal storms, which should churn up waters and disperse the nutrients that allow the algae to thrive. Those systems should gather between late September in the Pacific Northwest and early winter in California. But from then on it’s harder to say. The “blob” could persist through or return after the El Niño expected this winter. But if it is strong enough, the El Niño could also lead to less predictable conditions come spring and even make another large bloom unlikely for years to come, explains Mantua, the NOAA climate scientist. That would make this current, extreme algal bloom look more like an anomaly than a new trend.

Still, even if the coast sees some relief from algae for the next few years, big changes can be expected in the coming decades as oceans warm worldwide. That could produce more hospitable conditions for algae and lead to different ecological threats, like red tides and dead zones, in the Pacific. “I think this is a window into the future,” Trainer says. “We can expect more of this to come.”