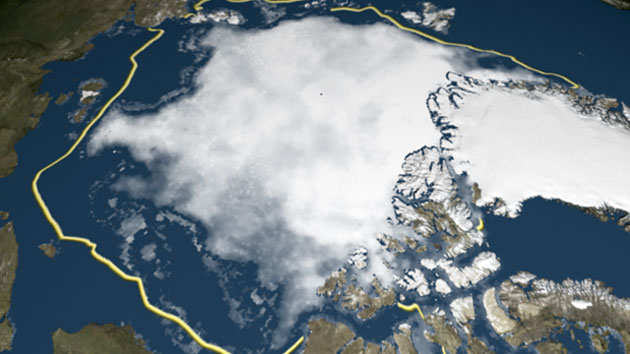 Ice coverage in the Arctic this year shrunk to its fourth lowest extent on record, US scientists have announced.

The National Snow and Ice Data Centre (NSIDC) in Boulder, Colorado, said the ice reached a low of 1.7 million square miles on September 11 in what experts said was a clear indicator of climate change.

Sea ice melt is closely tied to warmer weather over the region, which can be affected by climate change and short-term weather variability. The weather patterns recorded over the summer were favorable to a low ice extent, the NSIDC said.

The lowest sea ice extent ever recorded was in 2012, followed by 2007 and 2011 respectively. This year’s date comes four days earlier than the average minimum from 1981 to 2010. In March it was reported that last winter’s sea ice maximum hit a record low.

Jeremy Wilkinson, senior scientist at the British Antarctic Survey, said: “This is undoubtedly an indicator of climate change. Even though it’s the fourth lowest on record it’s an ongoing downward trend that has been monitored for many years. For sea ice to melt you need a warmer atmosphere and a warmer ocean so these changes reflect the changes in the ocean and the atmosphere.”

Wilkinson added: “The beauty of monitoring sea ice extent is that you can see it very clearly from space so you can record it very accurately. We have a very long track record.”

Satellites have been monitoring the Arctic sea ice since the 1970s. 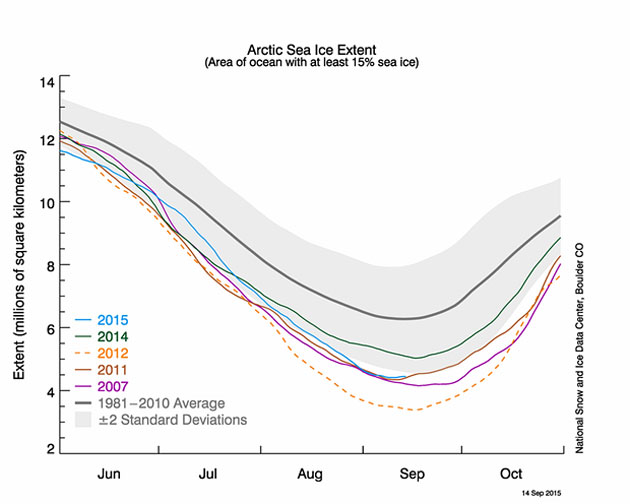 Andrew Shepherd, director of the Centre for Polar Observation and Modelling at the University of Leeds, told the Guardian that it was also important to establish the sea ice thickness, which cannot be picked by satellites over the summer months. It will start to be recorded next week.

“What also matters is how thick the ice is, how cool winter was, which means sea ice can grow over the winter period which makes it more stable going into summer,” he said.

In 2013, the Arctic sea ice experienced an unexpected revival, with the ice volume recorded increasing by 41 percent. Researchers said it did not indicate a wider recovery of the ice cap, but suggested that if global warming was tackled the potential for long-term recovery was more likely than previously thought.

On Monday the Met Office predicted that 2015 and 2016 will be the hottest yet reported, with 2014 having previously broken the global record.

The news comes with less than two weeks left in the window of time for drilling oil in the region. After a summer of setbacks, oil giant Shell was given final permission a month ago by Barack Obama, who has faced sharp criticism for the decision.

Greenpeace spokesman, Ben Ayliffe, said: “We don’t need any more satellite images of shrinking sea ice to tell us that urgent action is needed to protect the far north. It’s time for governments, business and people the world over to respond and the most obvious place to start is by calling a halt to Shell’s reckless search for Arctic oil.”

NSIDC is yet to provide a full analysis of this year’s melt, noting that there is a chance that changing wind patterns or low season melt could see the ice recede further.