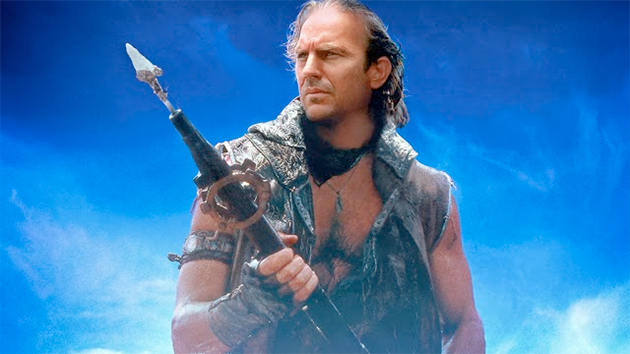 Here’s a bit of depressingly apocalyptic news to kick off your weekend: A new study has found that if humans burn all of the known reserves of coal, oil, and natural gas, virtually all the ice on the planet will melt, inundating the land with up to 200 feet of sea level rise.

The good news is we’ll all be long dead by the time this happens. Even at our current rate of carbon dioxide emissions from burning fossil fuels, the kind of catastrophic ice loss the study describes won’t take place for several thousand years. The exact timing is the hardest part for scientists to nail down; the ultimate outcome, however, is quite certain. One of the study’s authors, climatologist Anders Levermann of the Potsdam Institute for Climate Impact Research, described it as similar to leaving an ice cube on a table in a hot room: You can be confident it will melt, even if you don’t know exactly when.

Scientists have been carefully scrutinizing ice in Antarctica for a while now, since so much of the world’s water—and thus, potential sea level rise—is locked up there. The most studied section is the West Antarctic Ice Sheet, which appears to already be in an irreversible decline and could ultimately produce 10 feet of sea level rise. But Levermann said the study today, published in the peer-reviewed journal Science, is the first to look holistically at ice across the whole of Antarctica. The scientists projected loss of ice in a series of increasingly dire scenarios, based on the total amount of CO2 humans release after today. Ten thousand gigatons of CO2 is roughly what you’d get from burning all the known fossil fuel reserves. Our current rate is about 36 gigatons per year, and rising, so depleting the remainder could take a few hundred years. After that, it would take several thousand more years for the full effect of the warming to take hold.

The chart below shows the eventual ice loss after 10,000 years given different quantities of emissions: 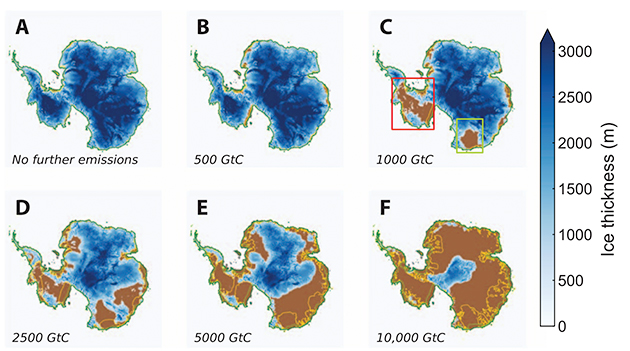 What’s even scarier isn’t shown in the chart: Antarctica, Levermann said, “will be the last bastion, the last ice on the planet.” In other words, if we reach scenario F, all the rest of the world’s ice will already by gone. At that stage, you can kiss most of the coastal cities goodbye (if they’re still there, anyway—remember, we’re talking about thousands of years in the future).

To be sure, there are plenty of reasons to be concerned about climate change in the more immediate future: more extreme weather, droughts, crop failures, and the like. Sea level rise (albeit on a much smaller scale than what is described here) is already taking a toll on coastal communities around the world. But this is a disturbing preview of the long-term disruption caused by our actions. I certainly wouldn’t want to be on Earth then: