Something big and strange is happening in the United States this week.

Three wildly different world leaders with divergent personalities, agendas, and backgrounds will be in the same country at the same time, fighting for the same thing—solutions for climate change.

Ahead of the UN General Assembly meeting in New York City, an unprecedented triumvirate will be on US soil: President Xi Jinping, the Communist leader of China’s 1.3 billion people and the world’s biggest carbon polluter; Pope Francis, the leader of the world’s 1.2 billion Catholics, and a self-modeled reformer; and US President Barack Obama, the leader of the world’s largest economy (and a man who doesn’t need to be reelected). In one way or another, they each have made fighting global warming a core part of their leadership at home and abroad.

The trio isn’t publicly scheduled to meet each other in America this week—though they will almost bump into one another. But the confluence of these heavy hitters is pumping optimism through green groups that a climate accord may finally be forged at the UN meeting in Paris at the end of the year.

Suddenly, they say, political rhetoric is turning into real momentum. Here’s why. 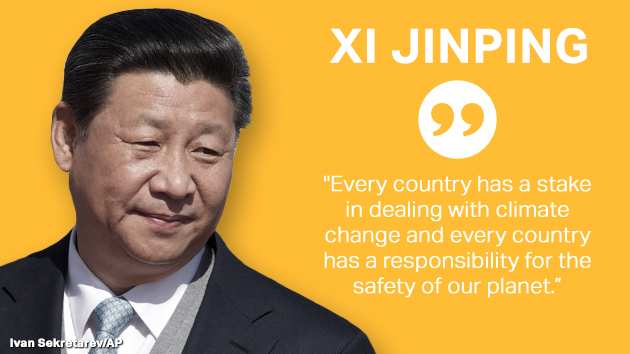 This is Xi’s first official state visit to the United States, and climate change is one of the big-ticket items he will likely discuss with Obama at a working dinner (before he heads off to New York for the General Assembly).

While the United States and China have loads of thorny issues to grapple with, including computer hacking and the militarization of the South China Sea, climate change is one topic on which the two countries share surprising common ground, according to Li Shuo, who closely tracks international climate negotiations for Greenpeace. The countries’ positions are increasingly entwined and hard to unravel, Li said.

“The politics are very much bonded together now, which I think carries even longer-term ramifications. I’m not sure whether the US-China cooperation will extend after this president, but I think the politics are increasingly linked and connected very, very closely.”

And there’s already much to capitalize on. In November 2014, the US pledged to cut emissions by up to 28 percent by 2025, while China agreed that its emissions would peak around 2030, and promised to get one-fifth of its power from non-fossil-fuel energy sources by the same year. There are powerful local incentives for Xi to act: foul air full of exhaust and particles from burning coal has reached a tipping point across Chinese cities. Xi’s visit this week comes days after an agreement was signed last week at the first-ever US-China Low Carbon Cities Summit in Los Angeles, which commits 11 giant Chinese cities and several major US cities to slashing carbon emissions.

Look for more evidence of the United States and China’s strategic cooperation in the next two or three days, Greenpeace’s Li said. All that energy might lead to a more successful meeting in Paris come the end of the year, Li added: “You have a whole different power dynamic, and that’s backed up by quite substantive policy changes in a few key countries, in China and the US.” 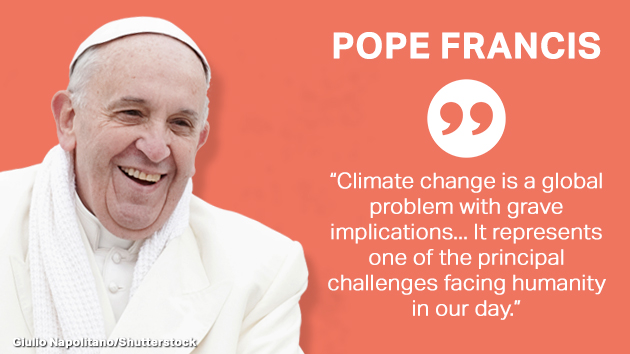 We don’t yet know what Pope Francis will tell a joint session of Congress on Thursday, but he’s already exciting climate advocates. His six-day visit, his first to the United States, comes after a landmark papal letter, or encyclical, in which he said humans were contributing to the “unprecedented destruction of ecosystems.”

“Francis first and foremost proclaims climate change as a religious and a moral issue,” said Christopher Hale, executive director of Catholics in Alliance for the Common Good, a DC-based not-for-profit that addresses income inequality and the environment. “I think he is the person that can move the needle on the United States’ approach to climate more than President Obama can; in particular, I think he can give space to GOP politicians to address this issue.”

Francis wades into a US culture war over climate change that has prompted one Republican congressman to boycott the pope’s address. Meanwhile 10 other conservatives broke ranks with their party on climate and have called for action.

“This isn’t some lefty ideological policy Pope Francis is pursing,” said Hale, who was in the crowd welcoming the pope at Andrews Air Force Base Tuesday afternoon. “Francis can communicate it at a level and to an audience that normally wouldn’t listen.”

“When he talks about caring for creation, he says it comes from the same cloth as caring for the unborn,” Hale explained, using the debate over abortion as an example. “It makes a political mess for American politics.”

The Reverend Canon Sally Bingham—who will greet Francis at his White House arrival ceremony and will be a featured speaker at the Follow Francis rally on the National Mall—agrees: Francis is a political circuit breaker.

Francis pulls climate “out of politics and into the hearts and minds of individual people,” said Bingham, who is the president and founder of Interfaith Power and Light, a religious group devoted to environmental change. “I think he doesn’t attach himself to any one doctrine in a way. He is real, and he’s authentic. And he’s a thinking person who’s not tied to a political party.”

The rare combination of Obama, Xi, and Francis talking climate at the same time makes Bingham optimistic that the leaders’ influence will affect the Paris agreement later this year. “You have science, moral authority, and practicality all coming together, and I think it’s quite amazing,” she said.

And of course, all this additional support gives Obama—whose climate legacy has taken significant shape over the last year—the opportunity to keep saying things like this: 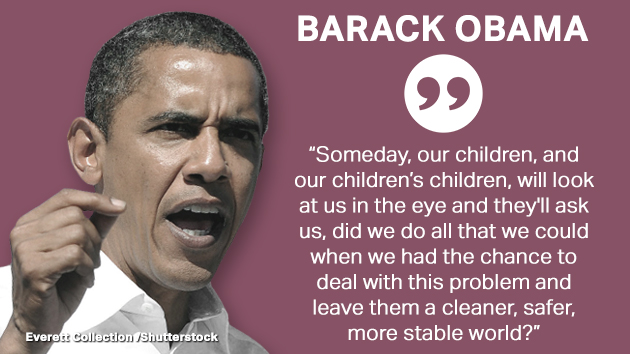