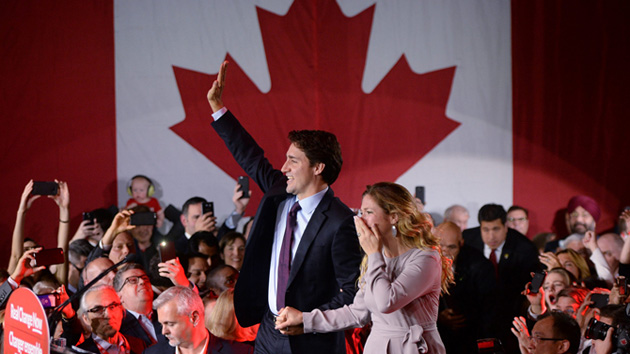 The conversation did not go well. Suzuki admitted to journalists he called Trudeau a twerp, and the Liberal leader dismissed his critique of the party’s climate policy as “sanctimonious crap.”

Those hoping for a U-turn in Canada’s climate change policy after Conservative Prime Minister Stephen Harper’s crushing defeat are in for a reality check.

Trudeau has repudiated Harper’s vision of Canada as an “energy superpower,” promised to reverse devastating cuts to government science budgets, and fix the country’s reputation as a carbon bully in international climate negotiations.

But it would be a mistake to see Trudeau or the Liberals as climate champions. In his victory speech on Monday, there was no mention of climate change, and he was criticized for being vague on the issue during campaigning.

Those hoping for a U-turn in Canada’s climate change policy after Conservative Prime Minister Stephen Harper’s crushing defeat are in for a reality check.

Trudeau committed to take part in the Paris climate conference at the end of the year, and to convene a meeting of provincial leaders within 90 days to come up with a plan to fight climate change.

His party’s campaign platform called for the setting up of a $2 billion fund to help projects that promote clean energy.

However, Trudeau supports the Keystone XL pipeline—Canada’s bid to find new markets for its vast carbon reserves in the Alberta tar sands—a position that puts the Liberal leader at odds with campaigners and with Barack Obama.

Trudeau has close ties to Keystone. David Gagnier, his campaign co-chair, was forced to step down last week after it emerged he had written a memo to TransCanada, the company building the pipeline, offering lobbying advice.

Moments after his victory, Trudeau came under pressure to do more to fight climate change. Elizabeth May, the Green party leader, told the broadcaster CBC she had asked him to think about the topic during a short election night conversation.

“When can we sit down and talk about the climate conference?” May said she asked Trudeau. “We only have 40 days for Canada to get our act together. I’m very concerned that we have to rebuild the damage that Stephen Harper has done to our laws, to some of our policies, to our reputation in the world.”

Indeed, Canada has a lot of catching up to do. But two key Liberal positions, on the Keystone XL and on emissions reductions targets, put Trudeau out of step with Obama, who has made climate change the signature issue of his second term in the White House.

Those contradictions could have been the result of tough political realities of the election. Trudeau started out a distant third to the conservatives. Suzuki told CBC he chided Trudeau for playing politics.

“I said, ‘Justin, stop it,'” Suzuki told CBC. “‘You’re just being political. I know that you want to make headway in Alberta so you’re for the continued development of the tar sands, you’re for the Keystone pipeline, but you’re against the Northern Gateway [pipeline]. You’re all over the damn map!'”

In Suzuki’s version of the conversation, Trudeau did not appreciate the critique or hearing that keeping warming to 2 degrees Celsius (3.6 degrees Fahrenheit), the internationally agreed goal of the climate talks, would mean that 80 percent of the crude in the tar sands would have to stay in the ground.

But now that Trudeau has won such a decisive majority, his position could change, said Katharine Hayhoe, the climate scientist and commentator, who is from Canada. “It is certainly true that in the past liberal governments have not lived up to their promises on climate, but today we are in a very different situation, in terms of seeing the impacts and in terms of other nations like China taking action,” she said.

“It’s a different political climate internationally for climate change now than what it was nine years ago, the last time there was a liberal government. I feel a lot more momentum, a lot more impetus, a lot more motivation for Liberals to take a stronger stand on this issue.