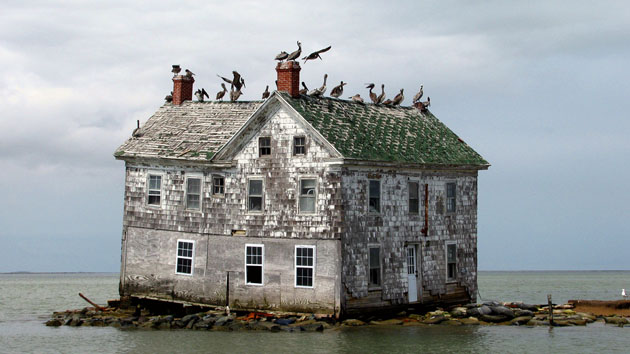 This story originally appeared in Newsweek and is reproduced here as part of the Climate Desk collaboration.

Twelve miles off the coast of Maryland’s Eastern Shore, Tim Marshall and I knife through the salty, choppy waters of the Chesapeake Bay in an aging white fishing skiff. It’s a clear, bright August morning, and Marshall, slugging cans of Diet Coke, steers us straight for the approximately 4,500 acres of tidal marsh that make up the federal Martin National Wildlife Refuge. To our backs is Smith Island, the last inhabited offshore island on the Maryland side of the Chesapeake.

Marshall pilots us to the outer banks of the wildlife refuge, where the horizon is nothing but the blue waters of the Chesapeake and a faint speck in the distance—the remains of Holland Island, whose 360 residents fled rising waters and eroding soil in 1922, and which serves as a constant reminder to the people living on Smith Island that they might be frogs in a pot of slowly boiling water. Smith Island too is disappearing, its land eroding as it submerges into the Chesapeake.

Smith Island comprises the wildlife refuge and a stretch of islands directly south, where roughly 280 residents live in three small villages about 5 feet above sea level. But erosion nips away at Smith Island’s banks at a rate of roughly 2 feet each year, and a 2008 report predicted that by 2100 Smith Island will be “almost completely under water as the Bay’s average level goes up nearly one-foot.”

Which is why, even though Smith Island emerged relatively unscathed after Hurricane Sandy hit in 2012, the state’s Department of Housing and Community Development offered Smith Island residents a buyout to move. Most rejected the offer. Some, like Marshall, don’t believe there’s any risk to living on the island. “The whole sea-level rise—it’s BS,” he says, talking loudly over the boat’s motor. “I’ve lived here my whole life and haven’t seen a difference,” he continues, then shakes his head at excavators on barges piling gray stone in front of the refuge’s outer bank. Other Smith Islanders wondered why the state didn’t offer to pay for new protective seawalls and jetties and dredging projects to pile up sediment on the land they believe can be saved.

Most Smith Islanders believe the island can be saved—if there’s the money to do it. There are already some man-made defenses built around the island’s shorelines: A jetty protects the western side of Ewell; a bulkhead and riprap—piled stone that acts as a barrier between a coastline and waves—shield Tylerton. But over on Rhodes Point, on Smith Island’s west side, a narrow island that acts as a barricade between the village and the Chesapeake is eroding away. While a jetty project designed by the Army Corps of Engineers is ready to go, federal and state funding to construct it has yet to be appropriated.

A 2008 report predicted that by 2100 Smith Island will be “almost completely under water as the Bay’s average level goes up nearly one-foot.”

Even if the Chesapeake can be kept at bay, there’s no guarantee islanders will stay: In the past 15 years, a growing number have moved out, seeking better opportunities on the mainland. The question today is what will vanish first—the island or its people?

Inaccessible by car, Smith Island is reached by a 45-minute boat ride from Crisfield, Maryland, to the east. Bridges and gravel roads connect the villages of Ewell and Rhodes Point, but the only way to get to Tylerton is on a boat. Smith Island is quaint: There are no chain stores, ATMs or police stations, and mail and supplies arrive daily by boat. Residents drive vehicles brought over by barge, while visitors usually navigate by golf cart or bicycle. A one-room school building accommodates children until they are ready to travel on ferries to the mainland for high school. The Smith Island Baking Company, responsible for Maryland’s official dessert, Smith Island cake, is in Ewell. Most of the men who live on the island make their living on the water, crabbing between April and September, then fishing for oysters the rest of the year. In some ways, the island hasn’t changed much since it was first inhabited by English settlers in the late 1600s.

As recently as the 1980s, it was still common for young men to quit high school and become watermen, but fishing for crabs and oysters has become more arduous over the last three decades. “It is difficult to make a living on the water,” says Sherri Marsh Johns, executive director of the Smith Island Cultural Center. “The pattern seems to be that our young people stay until they have children—then economics force them to move for better jobs.”

Today, just 276 people live on Smith Island. There are efforts to raise that number, but it’s hard to bring new residents to a place that, as Chesapeake Climate Action Network Executive Director Mike Tidwell wrote in the Baltimore Sun in 2009, “will almost certainly disappear even faster than the Maldives and faster than several much-publicized South Pacific island nations.” Global warming appears to be the bandit that can’t be stopped. The melting glaciers and loss of ice from Greenland ice sheets have contributed to the rapid sea-level rise in the Chesapeake. The Army Corps of Engineers estimates that some 3,300 acres of Smith Island land have eroded over the last 150 years. Currently, only 900 acres of the island chain are habitable.

For now, life on Smith Island carries on. “The island is going to be just fine. Our problem is we’re running out of people,” Marshall says to me on his boat in early August. As we head for Ewell, he makes it clear how he feels about media reports claiming Smith Island is falling into the Chesapeake Bay. He asks me if I’m familiar with Public Enemy. Sure, I tell him. He quotes: “Don’t believe the hype.”

But, in truth, Smith Island’s story seems to have been written many times over on other Chesapeake Bay islands: The last residents of James Island, formerly home to hundreds of settlers on 975 acres, left in the early 1900s. Poplar Island, once 1,500 acres and a former retreat for two presidents—Franklin Roosevelt and Harry Truman—is home now to just wildlife. And Holland Island today is best known nationally for the photograph taken in 2010 of its final house falling into the Chesapeake, another victim of rising seas.