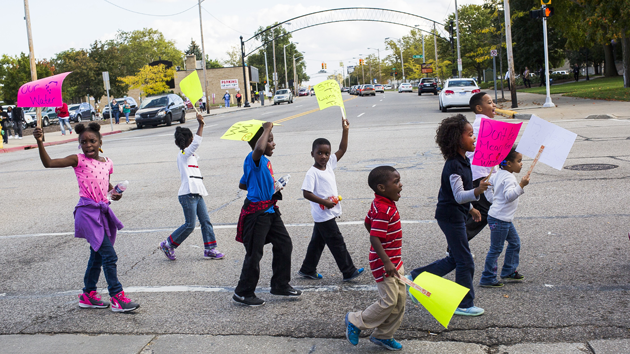 Children in Flint, Michigan, have such high levels of lead in their blood that Mayor Karen Weaver declared a state of emergency on Monday, calling the situation a “manmade disaster.” The origins of the escalating situation in Flint go back to 2011, when Republican Gov. Rick Snyder appointed an emergency financial manager to balance Flint’s budget—largely by cutting costs on basic public services. Here’s what you need to know:

In April of 2014, Flint switched its water source from Detroit to the Flint River in an effort to save money. The decision, made by emergency manager Darnell Earley, was met with skepticism: Residents complained that the water was smelly and cloudy. Water tests have since shown high levels of lead, copper, and other bacteria, including E. coli. (GM started hauling in water to its remaining Flint plant last year after noticing that the Flint water was corroding engines.)

According to the Hurley Medical Center study below, the proportion of kids under five with elevated levels of lead in their blood has doubled since the switch to Flint River water, to roughly four percent. In some areas, that number has leapt up to more than six percent. “This damage to children is irreversible and can cause effects to a child’s IQ, which will result in learning disabilities and the need for special education and mental health services and an increase in the juvenile justice system,” wrote Weaver in the state of emergency declaration. In October, the city transitioned back to the Detroit water system, though lead levels still remain higher than the federal action level.

Why are the lead levels so high in Flint?

Flint, the birthplace of General Motors and once a prosperous city, has been in a state of decline for decades. The population has halved since its peak in the 1960’s and 70’s; by 2013, the city had lost roughly three quarters of its property tax base and suffered from a 16 percent unemployment rate. The problem has been met with austerity: Under a controversial law passed by Republican Gov. Rick Snyder, who has been criticized for close ties with the Koch-funded American Legislative Exchange Council (ALEC), the state can now appoint emergency managers with the ability to override local policies and make sweeping decisions in the name of “fiscal responsibility”—a policy that stripped half of the state’s black residents of their voting rights.

Flint emergency manager Darnell Earley implemented steep budget cuts, including last year’s decision to save money by changing the city’s water source. In March, Earley’s successor, Jerry Ambrose, nixed a city council vote to “do all things necessary” to switch back to the Detroit system in March, calling the decision “incomprehensible.” The series of events has led to litigation: In November, Flint residents filed a class-action lawsuit alleging that the contaminated water caused them to experience myriad health conditions, including skin lesions, hair loss, depression, vision loss, and memory loss. The same month, the ACLU and Natural Resources Defense Council sued the city, governor, and public officials, claiming that public officials have known for years that drinking Flint River water could result in contamination problems. Michael Steinberg, legal director for the ACLU of Michigan, said, “In their short-sighted effort to save a buck, the leaders who were supposed to be protecting Flints’s citizens instead left them exposed to dangerously high levels of lead contamination.”

How are residents getting by?

Those who can afford it are buying bottled water, but Flint is one of the poorest cities in the nation—41 percent of residents live in poverty. Many still use city water for bathing and cooking.

What are the effects of lead poisoning?

It’s easy to diagnose someone with high lead levels—it simply takes the prick of a finger and a blood test. The symptoms manifest slowly, often years later. According to the World Health Organization, “Lead affects children’s brain development resulting in reduced intelligence quotient (IQ), behavioural changes such as shortening of attention span and increased antisocial behaviour, and reduced educational attainment. Lead exposure also causes anaemia, hypertension, renal impairment, immunotoxicity and toxicity to the reproductive organs. The neurological and behavioural effects of lead are believed to be irreversible.”

What are state officials doing?

A pipeline connecting Flint and other central Michigan counties with Lake Huron is in the works and scheduled to be completed by late 2016. In the meantime, according to a recent Washington Post article, the state has offered more than $10 million to pay for the temporary switch back to the Detroit water system, in addition to covering the costs of water testing and water filters.