Ted Cruz is certain that global warming stopped 18 years ago. He said that repeatedly during a Senate hearing he chaired Tuesday afternoon devoted to examining what he described as “the science behind claims of global warming.” Satellite data, insisted Cruz, shows that “there has been no significant global warming for the past 18 years.”

Cruz—who is currently one of the GOP front-runners in Iowa—has made this claim before. Back in March, Kevin Trenberth, a leading climate scientist at the National Center for Atmospheric Research, told Climate Desk that Cruz’s theory is “a load of claptrap…absolute bunk.” And Ben Santer, a researcher at the Lawrence Livermore National Lab, blasted Cruz for “embrac[ing] ignorance with open arms.” The scorn of those leading scientists apparently wasn’t enough to get Cruz to change his tune. But perhaps what happened at Tuesday’s hearing will make a difference.

“I would note this chart…which shows for the last 18 years, that there has been no significant warming whatsoever,” said Cruz. He then asked Retired Rear Admiral David Titley—a meteorologist who previously served as the oceanographer of the Navy—about this so-called “pause in global temperatures.”

Titley’s response was fantastic, and you should watch the whole exchange above.

He started out by explaining that Cruz’s dataset begins just before the exceptionally warm El Niño year of 1998. Out of context, this makes recent warming appear less dramatic. As the UN’s Intergovernmental Panel on Climate Change points out [PDF], the warming trend looks much bigger if you pick 1995 or 1996 as the beginning of your dataset.

Titley, who is now a meteorology professor at Penn State, then pointed to his own chart—more than a century’s worth of temperature data that shows an unmistakable warming trend. “I’m just a simple sailor,” said Titley, “but it’s hard for me to see the pause on that chart. So I think the pause has kind of come and gone.” 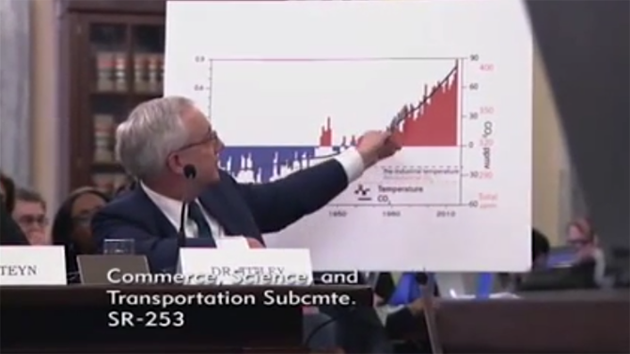 Cruz then noted that his own chart focused on data from satellites (whereas Titley’s uses data from thermometers on the Earth’s surface). But Titley shot back that the satellite measurements—which are frequently touted by climate change deniers—have a number of significant problems. Indeed, as my colleague Tim McDonnell explained in March:

[T]here are a couple important caveats with satellite temperature data that Cruz would do well to make note of. One, Santer said, is that it has a “huge” degree of uncertainty (compared to land-based thermometers), so it should be approached with caution. That’s because satellites don’t make direct measurements of temperature but instead pick up microwaves from oxygen molecules in the atmosphere that vary with temperature.

Fluctuations in a satellite’s orbit and altitude and calibrations to its microwave-sensing equipment can all drastically affect its temperature readings.  More importantly, satellites measure temperatures in the atmosphere, high above the surface. The chart above shows the lower troposphere, about six miles above the surface. This data is an important piece of the climate and weather system, but it’s only one piece. There are plenty of other signs that are far less equivocal, and perhaps even more relevant to those of us who live on the Earth’s surface: Land and ocean surface temperatures are increasing, sea ice is declining, glaciers are shrinking, oceans are rising, the list goes on.