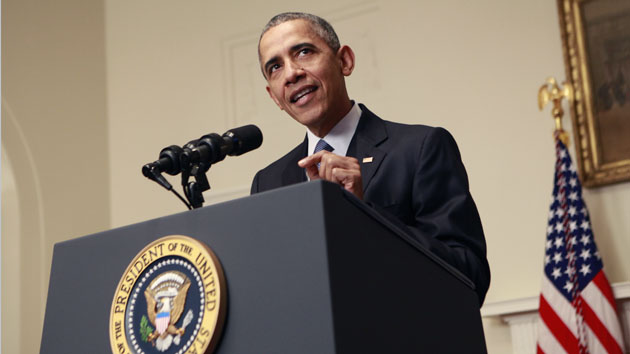 President Obama speaks at the Paris Climate Conference in December.Dennis Brack/CNP via ZUMA

There’s only one year left until President Barack Obama leaves office, and there’s a fair chance he will be replaced by a climate science-denying Republican, perhaps one in the form of a comb-over-sporting reality TV star. So time may be running out for the United States to take meaningful actions to fight climate change.

Obama already has some important climate achievements under his belt—most notably, paving the way for the Paris Agreement and cracking down on coal plant emissions through the Clean Power Plan. But there’s no way he can implement really big, comprehensive policy solutions—like a nationwide cap-and-trade system or a carbon tax—because Republicans dominate Congress.

So what could Obama achieve in his last 12 months? Even without cooperation from Capitol Hill, he still has the power to make some major moves that would cut emissions, help shift the U.S. from dirty to clean energy sources, and send a signal to the world that America is serious about trying to achieve the grand goals agreed to in Paris. If he truly wants to make climate action a key part of his legacy, he needs to seize these opportunities.

Reform fossil fuel leasing on federal lands. This is the biggest priority because it has the most potential to clamp down on emissions. The federal government leases a lot of land to private companies for extraction of oil, gas, and, coal. The prices it charges are often below the market rates—especially for coal—and don’t account for the social costs of conventional pollution or of climate change. On the left, groups like 350.org and politicians like Bernie Sanders have proposed simply banning fossil fuel extraction on federal lands altogether, under the banner of “keep in in the ground.”

The Obama administration has shown no appetite for that, but Interior Secretary Sally Jewell said in March of 2015 that they would start to examine the climate impact of leasing programs. We haven’t seen any action yet, but based in part on conversations with administration officials, environmental lobbyists say they are encouraged. “I think there’s increased interest in the administration about, at the very least, addressing the give-away price,” says David Goldston, director of government affairs at the Natural Resources Defense Council. “We’ll be pressing for action, but there seems to be more openness than there has been.”

Ban offshore oil drilling in the Arctic and off the Atlantic coast. A year ago, the Obama administration proposed opening up new coastal areas to drilling, including parts of the Chukchi Sea northwest of Alaska and waters off the shores of the southeastern U.S. That was a bad move, but the plan has not yet been finalized, so the administration could still change course.

The environmental community has pushed back hard against these new drilling plans. Last year, activists protested Arctic drilling by blocking Shell ships in Seattle and Portland. Along the affected stretch of the Atlantic coast, from Virginia to Georgia, communities have been coming out against drilling as well. Green groups are calling on the administration to remove both areas from its drilling plan, and activists say they are optimistic. “The administration is much more aggressive on climate now,” says Goldston. “Opposition on the East Coast has been stronger than expected.”

But while the Obama administration has grown more aggressive on combatting emissions from the burning of fossil fuels, it still supports the extraction of fossil fuels as part of its “all of the above” energy strategy. As recently as a September interview with Rolling Stone, Obama was defending Arctic drilling. So it would take a big shift in Obama’s thinking in a short time for him to turn against offshore drilling.

Crack down on methane leakage from existing oil and gas wells. When natural gas is burned, it emits about half as much CO2 as coal. But lots of natural gas, which is essentially methane, leaks out of well sites and pipelines before it can get burned—a big problem because methane traps 86 times more heat over 20 years than CO2 does. So much methane is leaking that it may erase gas’s climate advantage over coal. The industry needs to be required to prevent, catch, and fix those leaks.

The more policies Obama puts in place before he leaves office, the harder it will be for President Trump to lead the country backward next year.

EPA last year proposed rules that will require companies to limit methane leakage from new wells and pipelines, and those rules are on track to be finalized this year. But that still leaves a gaping hole: existing wells and pipelines, of which there are a whole lot. A 2014 study projected that nearly 90 percent of methane emissions from the oil and gas industry in 2018 will come from sources that were already in use by 2011, and EPA’s current plan wouldn’t do anything to fix that.

EPA said last year that it will first try voluntary industry efforts to clean up existing wells. Now it’s sounding more open to crafting rules for existing wells. “We’re going to begin looking at existing [sources],” EPA Administrator Gina McCarthy told Grist in an interview in Paris during the U.N. climate negotiations last month. In another positive sign, White House adviser Brian Deese said at a recent event in Washington, D.C., that the administration is considering new rules on methane at fracking sites. But the EPA would have to move fast because the rule-making process takes many months.

Climate actions Obama already has in the works

Whether or not Obama makes any of the big moves listed above, he’s got some smaller—but still meaningful—climate actions already in process to be finalized in 2016.

Tighten mileage standards for big trucks. Obama’s EPA has already tightened fuel efficiency standards for cars and light trucks twice, and for medium- and heavy-duty trucks once. Now it’s working on a second round of stricter rules for the bigger trucks; the rules were proposed last summer and they’re expected to be finalized this spring.

Cut down on leaks of HFCs. Hydrofluorocarbons (HFCs) are refrigerants that, much like methane, are potent greenhouse gases when released into the atmosphere. In October, EPA proposed new rules to cut down on leaks by regulating the handling and recycling of HFCs by industries that use them, such as supermarkets. “We’re working really hard on hydrofluorocarbons, which may not be what everyone understands is a big deal, but it is a very big deal because they can be 10,000 times more warming or dangerous to the climate than CO2,” McCarthy told Grist in a phone interview in October.

Stop the oil industry from wasting so much natural gas on public land. The oil drilling process often brings up natural gas too, and drillers sometimes just release the gas into the atmosphere, which is called “venting,” or burn it off, which is known as “flaring.” The Department of Interior has proposed a rule—currently under review at the Office of Management and Budget, where it was submitted in September—that would require well operators on federal land to install better technology to capture the gas. That would make financial sense for the government, as it gets revenue from gas extracted on federal land when it is sold. “This is a marketable commodity that they could sell, so they are literally burning public dollars,” says Sara Chieffo, vice president for government affairs at the League of Conservation Voters.

Defend and implement the Clean Power Plan. Fossil fuel industry organizations and conservative state attorneys general have filed lawsuits trying to kill Obama’s plan for cutting CO2 emissions from power plants. Obama’s solicitor general will defend the plan in court, with help from EPA. Meanwhile, EPA will push ahead in enacting the plan. States have to submit implementation plans between 2016 and 2018, so EPA is working on a model plan to serve as a template for the states. It released a draft in October, and is now accepting comments with an eye toward finalizing the model plan later this year.

The more policies Obama puts in place before he leaves office, the harder it will be for President Trump to lead the country backward next year.