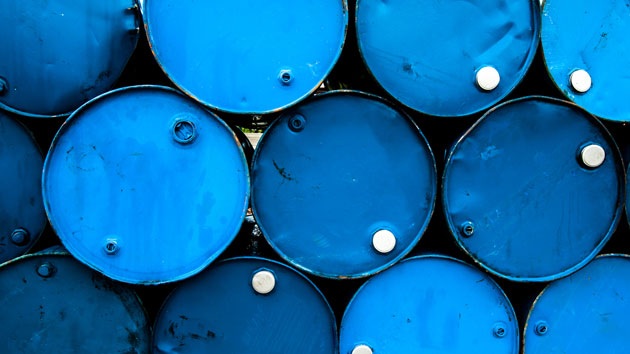 Climate change, caused in large part by the emissions from burning oil, may drown much of the world’s coastal cities as sea levels rise.

But first, oil may “drown” the world.

An unusually warm winter, weak demand and increased supply will lead to a glut of oil until late 2016, according to a report released Tuesday by the International Energy Agency.

Spring-like weather has driven down heating oil prices. And China’s economy, which is off to a rough start this year, has tapered the country’s usual thirst for the fuel. But despite plummeting prices, oil producers in Saudi Arabia have kept on pumping in fear of losing market share to Iran as the oil-rich country reemerges after earning relief from crippling sanctions.

“Unless something changes, the oil market could drown in over-supply,” the IEA, which is part of the Organization for Economic Cooperation and Development, wrote in the report.

Conventional wisdom posits that continuously cheap oil also poses a threat to the development of renewable energy. Even as the price of renewables goes down, why invest in wind turbines and solar panels—so thinking goes—when cheap fossil fuels are so abundant?

The answer is that, for the most part, oil doesn’t compete with renewables.

“Oil is largely transportation fuel, and renewables are largely electricity sources that provide power,” Brian Warshay, an analyst at Bloomberg New Energy Finance, told The Huffington Post in August. “They’re not really competing against one another in the same energy application.”

Just 1 percent of electricity generated in the United States last year came from oil, according to the US Energy Information Administration. That figure has remained unchanged for the past five years. Renewable energy accounted for 9 percent of US electricity produced last April—nearly doubling from the same month in 2010, when it accounted for just 5 percent.

Last year, natural gas—generally a cleaner, albeit controversial fuel—surpassed coal as the top US fuel used to produce electricity. Still, at up to $87 per megawatt hour, natural gas costs more than wind and just less than solar. And as companies and governments push to lower their carbon emissions to fall in line with last year’s historic climate accord in Paris, renewables will likely become a more attractive option.

While cheap oil may not be able to slow the pace of renewable electricity, it can take a toll on the electric car market. Last year, sales of sport utility vehicles and pickup trucks skyrocketed in the US as the price per barrel of oil dripped ever lower. Electric cars, by contrast, saw static sales growth and difficult headwinds as automakers struggled to overcome the thing that has long dogged the sustainable transportation industry: short-term thinking.

“If gas was $5 a gallon now, would a car like the Bolt be appealing to an even larger percentage of the US population? Absolutely.”

Though self-driving technology won most of the attention at the Consumer Electronics Show in Las Vegas earlier this month, car companies debuted an array of electric concept vehicles. One, Chevrolet’s roughly $30,000 Bolt, could be the first mainstream electric car cheap enough for average consumers to afford. In a market dominated by luxury players like Tesla Motors—which has promised a cheaper Model 3 sometime in the next few years—the Bolt is a welcome entrant.

“If gas was $5 a gallon now, would a car like the Bolt be appealing to an even larger percentage of the US population? Absolutely,” Karl Brauer, a senior analyst at the automotive research firm Kelley Blue Book, told HuffPost by phone on Tuesday.

Adding a lower-cost tier to the electric car industry might be the one thing that drowns out oil for good. Brauer said he expects more electric cars to enter the mass market over the next two years.

“It’s all going to come together timing-wise about when it should,” Brauer said. “The price of fuel and oil will become a secondary issue, at best.”