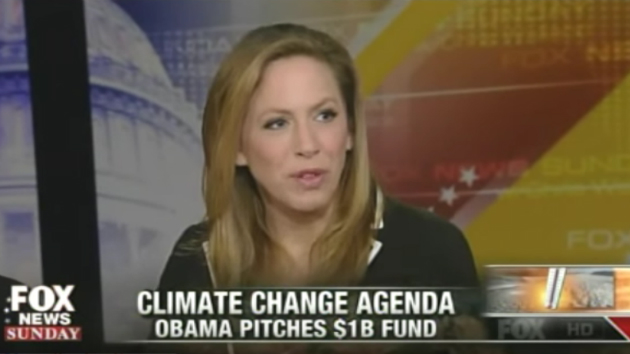 The presidential debates have been widely criticized for so far all but ignoring global warming. But Saturday’s Republican debate has the potential to be even more problematic. That’s because one of the moderators is an outspoken climate change skeptic.

In addition to Face the Nation host John Dickerson and White House correspondent Major Garrett, tonight’s CBS debate will feature questions from Kimberley Strassel, a member of the Wall Street Journal editorial board.

While not an obsession of Strassel’s, she’s long expressed doubts: in 2007, Strassel said on CNBC that “there isn’t a consensus yet that [climate change] is actually caused by man or necessarily will be a huge problem,” before adding “it’s real cold out there today.” (It was January.)

In 2009, she deployed scare quotes to claim that a set of leaked emails between climatologists had “blown the lid off the ‘science’ of manmade global warming.”

More recently, Strassel appeared on Fox in 2014 to explain that global warming “became climate change when you couldn’t prove that there was much global warming anymore, you know, as the temperature didn’t change,” going on to suggest that there was something nefarious about the shift to the widely preferred phrase: “we had to have this catch all term…that meant that any change in the weather somehow supported the theory.”

Those statements align pretty closely with the varying degrees of climate change denial espoused by the remaining Republican candidates. It’s not hard to imagine that a debate showcasing the views of Donald Trump, Ted Cruz, and Strassel could leave viewers extremely misinformed about climate science.

I’ve asked to Strassel to elaborate on her views and have asked her, Dickerson, and CBS how they plan to handle the issue. They haven’t responded.

Still, if the moderators decide to ask the candidates some scientifically accurate questions about global warming, we’ve compiled a pretty good list for them to pick from. My colleague Tim McDonnell asked a bunch of the nation’s leading climate scientists and environmental activists what they’d ask. Read their suggestions here.