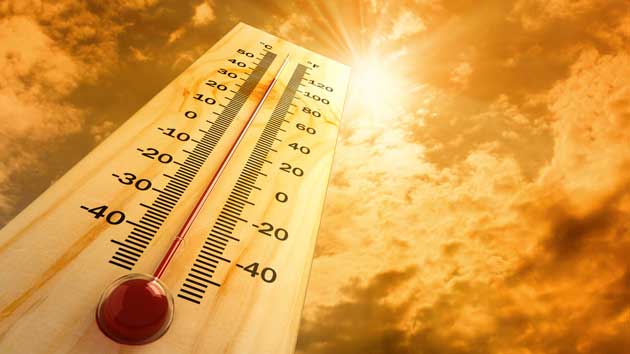 Hot enough for ya? It should be: January 2016 was the hottest January globally since records began in 1880. And it didn’t just edge out the previous record holder for January, it destroyed it.

If you want to see how temperatures have changed over time, it’s useful to compare them to an average over some time period. GISS uses the dates 1951–1980; it takes all the temperatures over that range for a given month, averages them, then subtracts that number from the average temperature measured for a given month. This forces the monthly range of 1951–1980 to give an average equal to 0, which is used as the baseline. You can then easily read off how much monthly temperatures deviate from that average, which is called the temperature anomaly; if a month is colder than usual for that month in the data, that shows up as a negative anomaly. If it’s warmer, the anomaly is positive. 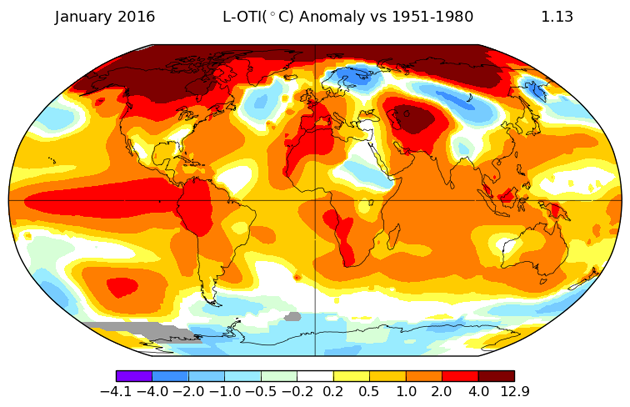 January 2016 land and ocean temperature anomalies (deviations from average temperatures in January from 1951 to 1980). The conclusion is pretty obvious. NASA/GISS

The global temperature anomaly for January 2016 was 1.13° Celsius. That makes it the hottest January on record (the previous record was 0.95° C in 2007). But there’s more: 1.13° is the largest anomaly for any month since records began in 1880. There have only been monthly anomalies greater than 1°C three times before in recorded history, and those three were all from last year. The farther back in the past you go, the lower the anomalies are on average.

Yes, the world is getting hotter.

On the blog Hot Whopper (and on ThinkProgress) it’s shown that a lot of January’s anomaly is due to the Arctic heating up far, far more than usual, as it has been doing for some time. The temperature map above makes that clear.

Look at how much warmer the Arctic is! Not surprisingly, Arctic sea ice was at a record low extent in January 2016 as well, more than 1 million square kilometers lower than the 1981–2010 average. But almost the whole planet was far hotter in January 2016 than the 1951–1980 average.

A lot of deniers will say this is a statistical fluctuation; sometimes things are just hotter. That is utter baloney. If that were true, you’d expect just as many record cold days/months/years as warm ones. Two Australian scientists looked into this and found record hot and cold days were about even…until the 1960s, then hot days started outpacing cold ones, and from 2000 to 2014 record heat outnumbered record cold by a factor of 12 to 1.

As it happens, we’re in the middle of an El Niño, an event in the Pacific Ocean that tends to warm surface temperatures. This is also one of if not the most intense on record. Some of that record-breaking heat in January is due to El Niño for sure, but not all or even a majority of it. As I pointed out recently, climate scientist Gavin Schmidt showed that El Niño only accounts for a fraction of a degree of this heating. Even accounting for El Niño years, things are getting hotter.

The root cause is not El Niño. It’s us. We’ve been pumping tens of billions of tons of CO2 into the air every year for decades. That gas has trapped the Earth’s heat, and the planet is warming up.

Several of the months in 2015 were the hottest on record, leading to 2015 overall being the hottest year ever recorded (again, despite the ridiculously transparent claims of deniers). Will 2016 beat it? We can’t say for sure yet, but judging from January, I wouldn’t bet against it.