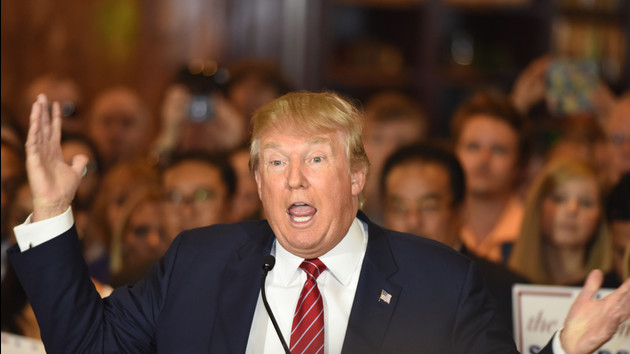 Donald Trump has won the last three Republican presidential nominating contests and he holds a big lead in national polls. On Friday, Chris Christie shook the political world by endorsing him. Christie is considered a business-friendly establishment Republican and his ilk have generally lined up behind Marco Rubio. Christie’s endorsement signals that he thinks Trump is going to be his party’s nominee and he wants to get on the winner’s good side.

Aside from his being an aggressively stupid climate science denier, Trump’s agenda would have alarming implications for the environment, public health, and all other forms of regulation and investment in the public interest. On Thursday, Trump called for abolishing the EPA—and all of its work protecting land, air, and water from pollution and combatting climate change—but that’s just the beginning. Trump’s budget plan is so mathematically illiterate and extremely right-wing that it would require eliminating all spending on nearly everything the government does.

Trump has proposed an enormous tax cut heavily tilted toward the wealthy. He would reduce federal tax revenue by $9.5 trillion over the next 10 years. That’s a 45 percent reduction in projected revenues. To be clear, this is only slightly more outrageous than the tax cuts proposed by his two major opponents, Rubio and Ted Cruz. Rubio proposed $6.8 billion in tax cuts over 10 years, and Cruz wants $8.6 trillion.

But that’s only where Trump’s budget-balancing problems begin. He also has promised not to cut spending on the major entitlement programs such as Social Security, Medicare, and Medicaid, and to increase military spending.

Look at breakdowns of the federal budget from Politifact and the Center on Budget and Policy Priorities and a few salient facts emerge:

–Roughly half of the federal budget goes to paying for entitlements, which Trump says he won’t cut.

–18 percent or so is for the military, including overseas operations. Trump wants to increase both general defense spending and our military actions in the Middle East.

Taken together these categories account for about 73 percent of the federal budget.

Trump would need to find around $1.4 trillion in savings per year—$1 trillion to pay for his tax cuts and $400 billion to close the current deficit hole.

We already have a projected budget deficit of $426 billion in 2016 and Trump has pledged to balance the budget. So he would need to make spending cuts that not only equal but exceed his 45 percent reduction in revenue. But he can’t do that when he can’t touch 73 percent of the budget.

Trump says he will pay for his tax cuts by getting rid of tax deductions and “waste, fraud, and abuse” in government programs. He claims voters won’t be “losing anything” in terms of actual government services.

This is impossible. His entire tax and budget plan—if the word “plan” can even be applied here—is absolutely mathematically impossible.

There aren’t enough tax deductions and loopholes to come anywhere near compensating for the lost revenue even if Trump closed all of them, and Trump has already said he won’t remove the two biggest income tax deductions, for charitable giving and home mortgage interest. (The latter is something we actually should gradually get rid of as it induces suburban sprawl.)

Trump would need to find around $1.4 trillion in savings per year—$1 trillion to pay for his tax cuts and $400 billion to close the current deficit hole. Eliminating every penny of “waste, fraud, and abuse” from non-military discretionary spending won’t result in anywhere near that kind of savings because all of that spending, wasteful or otherwise, accounts for only about $650 billion a year.

So what would happen if Trump’s tax cuts were passed? There would be an explosion in the federal budget deficit. Presumably the Republican Congress, as they often have in the past, would seize on the deficits they’d created as an excuse to squeeze discretionary spending down to as little as possible. In fact, there is a school of thought on the right, known as “starve the beast,” that calls for passing deficit-inducing tax cuts in order to force spending cuts. But they could cut discretionary spending down to absolute zero and there would still be a deficit.

Discretionary non-military spending includes almost all of the cabinet agencies, so Trump is essentially proposing to get rid of them. When asked how he would pay for his tax cuts in Thursday night’s CNN/Telemundo debate, Trump said, “We’re getting rid of—we’re going to get rid of so many different things. Department of Education—Common Core is out … Environmental protection—we waste all of this money. We’re going to bring that back to the states … We are going to cut many of the agencies, we will balance our budget, and we will be dynamic again.” As debate moderator Wolf Blitzer pointed out, the Department of Education’s entire budget is $68 billion per year and the Environmental Protection Agency’s is only $8 billion. Combined, they account for less than one-tenth of what Trump would need to cut.

The Department of Education’s entire budget is $68 billion per year and the Environmental Protection Agency’s is only $8 billion. Combined, they account for less than one-tenth of what Trump would need to cut.

So besides EPA and education, the departments of state, transportation, energy, commerce, treasury, justice, housing and urban development, and interior would all be on the chopping block. Cut them all entirely and Trump would still fall short. (There are some departments, like homeland security and health and human services, that Trump couldn’t eliminate without violating other promises, like enhanced border security and replacing Obamacare.)

Without those departments, the US would no longer print money, maintain embassies abroad, negotiate with foreign nations, investigate and prosecute federal crimes, or maintain highway and transit systems, to name just a few things. Enormous segments of the federal government would cease to function or even exist. The US would verge on becoming a failed state. It’s almost too absurd to contemplate — except that the man proposing it stands a very good chance of becoming the next Republican nominee for president.

So then let’s contemplate the implications for environmental protection. The government’s entire policy arsenal for combatting climate change, promoting clean energy, and protecting air, water, species, and ecosystems would be completely disabled. Here are just a few examples:

–No EPA means no Clean Power Plan and no further enforcement of existing regulations, or new regulations, on any related carbon or conventional air pollution. There would be no methane leakage rules, no new auto efficiency standards, no mercury or ozone regulations. Also no clean water programs. We’d have more Flints: more sick kids, especially in poor neighborhoods, from dirty air and poisoned water. Trump has been fantasizing for months about gutting the EPA, having told Fox News in October, “What they do is a disgrace. Every week they come out with new regulations. They’re making it impossible.”

–No State Department means no one to negotiate international climate agreements like the one recently struck in Paris. Trump, naturally, has already attacked the Paris Agreement.

–No HUD means no federal affordable housing programs and no funding for transit-oriented development. Support for urban rental housing would be axed, while we could continue to subsidize suburban home-buying through the tax code.

–No Department of Interior means no national parks management, no one to oversee and protect other federal lands, and no one enforcing federal endangered species protections.

–No Department of Justice means no federal prosecutors to bring charges when, say, a coal mining company violates federal safety laws. That recent conviction of Don Blankenship, CEO of Massey Energy? It wouldn’t have happened in Donald Trump’s America.

To be fair, Trump hasn’t actually called for eliminating all of these departments and he could just decide to be even more wildly fiscally irresponsible and not cut them. More likely is that he would both cut them to the bone and still run up a huge deficit.

Regulatory policy experts and public interest lobbyists who I reached out to for this article say that they are at a loss as to what Trump’s agenda would actually mean for environmental or public health regulation. What happens, for example, if you don’t repeal the Clean Air Act and Clean Water Act, but you completely disable or eliminate the agency responsible for their implementation and enforcement? No one is entirely sure.

The nicest thing that can be said about Trump’s budget vision is that it’s only marginally less cogent than his rivals’. Cruz and Rubio have also backed gigantic tax cuts and promised to increase military spending.

And in some ways, Cruz and Rubio’s stronger policy chops make them more overtly threatening to the planet and the people who call it home. Both have explicitly called for undoing the Clean Power Plan and withdrawing from the Paris Agreement. Trump probably doesn’t even know what the Clean Power Plan is. But what his right-wing extremism lacks in precision it makes up for in grandiosity. For Trump to keep his other promises, a lot of other goods would have to fall by the wayside, environmental quality and climate protection among them.