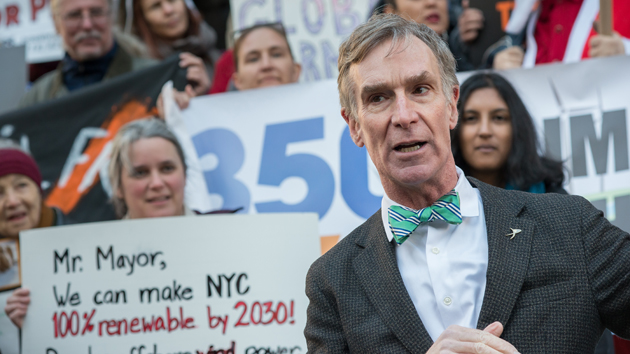 Bill Nye—who taught a generation of kids the wonders of science with the help of a bow tie and a catchy soundtrack—is taking a somewhat different tone with the politicians debating climate policy. His message: “Quit ya bitchin’; let’s get to work.”

In recent days, Nye has tussled with Sarah Palin (who thinks she’s “as much of a scientist” as the Science Guy) and has challenged a prominent global warming denier to back up his rhetoric with cold, hard cash, offering a $20,000 bet that 2016 will be one of the top 10 hottest years on record. In this week’s episode of the Inquiring Minds podcast, he talks with co-host Kishore Hari about congressional gridlock, the 2016 presidential campaign, and his new role as a “lightning rod” in the struggle against those who reject climate science.

Those skeptics may be vocal, but they represent a dwindling percentage of the population. According to Gallup, nearly two-thirds of Americans now agree that recent warming has been caused mostly by human activity. You wouldn’t know it from the rhetoric on the campaign trail, though. As Nye points out, all three of the remaining GOP presidential candidates dispute the scientific consensus—at least to an extent. Donald Trump has called global warming a “hoax” and has touted plans to dismantle the Environmental Protection Agency. Ted Cruz says climate change is a “pseudoscientific theory.” Even John Kasich has said he doesn’t “believe humans that are the primary cause of climate change.” Until last week, climate change was largely absent from both party’s presidential debates. Out of nearly 1,500 debate questions asked through late March, only 22 were about the climate, according to a Media Matters for America analysis.

But Nye says he wouldn’t be surprised if the eventual GOP candidate actually does unveil a decent climate plan once he secures the nomination. He’s got to, Nye says, if he has any hope of courting millennials—an increasingly important voting bloc in the general election. According to a 2015 Pew survey, 18- to 29-year-olds were far more likely than any other age group of adults to accept the scientific consensus on climate change. Many of these young people grew up listening to Bill Nye the Science Guy expound on the science of garbage or fish movement through crackling classroom VHS players. To them, he offers a simple plea: “Vote, vote, vote, and take the climate into account when you do.”

Electing a climate-friendly president is key, Nye says, because it could inject new life into Congress’ long-stagnant climate debate. “There are…many very reasonable people in Congress who are playing the hand they are dealt with these gerrymandered congressional districts,” he adds. “They have to please an extraordinary minority.” With the right leadership and timing, he says, the politicians just might take action.