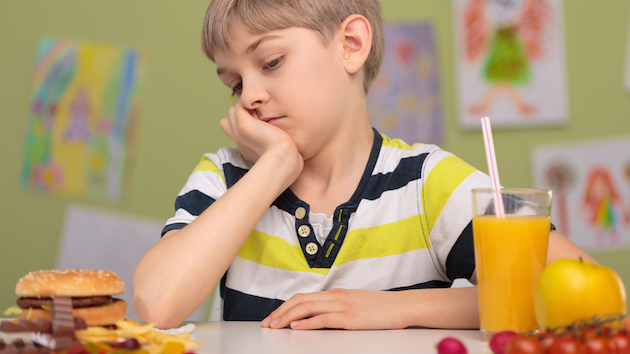 You probably haven’t heard much about it with the presidential election sucking up all the oxygen, but US lawmakers are mulling one of the nation’s most important and influential pieces of food legislation: a once-every-five-years bill that sets the budget and rules for school meals. And it hasn’t been a very appetizing process.

In a recent episode of Bite—the new podcast I host with colleagues Kiera Butler and Maddie Oatman—the excellent school lunch analyst and blogger Bettina Elias Siegel lamented that there’s no push to increase our miserly annual outlay on the lunch program, which serves about 30.5 million kids each school day. Currently, we spend about $13 billion in federal dollars on it each year—equal to about 2 percent of annual defense spending. That leaves cafeteria administrators with a bit more than a dollar per meal to spend on ingredients, leading to generally dismal-quality food, often served reheated from a box.

Instead of pushing for more resources, advocates are having to play defense, fighting to preserve reforms made in the previous Child Nutrition Reauthorization (as the bill is known). That act, passed in 2010, included a tiny per-meal budget increase but also required cafeterias to serve more fruits, vegetables, and whole grains, and to cut back on sugar, fat, and salt. It also limited the amount of junk food that can be served in a la carte lines—restricting a practice that has been linked to higher obesity rates. And it adopted a program to allow schools in high-poverty areas to automatically offer all students free lunches—a provision widely praised in anti-hunger circles.

The 2010 reforms have largely proven a success, Steven Czinn, the chair of the department of pediatrics at the University of Maryland School of Medicine, recently showed in a Washington Post op-ed. While the new rules got off to a rough start in some districts, things have improved, and tales of rejected lunches and fresh fruit piling up in cafeteria trash cans are overblown, he wrote.

“Children as young as five could go from having cookies or fries with their lunches once in a while to buying and eating them every day.”

Even so, those healthier food provisions provoked a furious backlash from tea-party-associated Republicans. In a notorious 2014 rant on the House floor, US Rep. Ted Poe (R-Texas) thundered against what he called “nanny-state lunches.” Then there’s the School Nutrition Association, a group that represents cafeteria administrators but gets about half its $10 million budget from the food industry. As Politico‘s Helena Bottemiller Evich reported in 2014, the group initially fought for the changes, but suddenly, in 2014, it began “standing shoulder to shoulder with House Republicans” in an effort to gut them.

In January, the Senate Agriculture Committee cobbled together a bill that preserved the 2010 reforms. But now its counterpart in the House, the Education and Workforce Committee, is pushing a bill that would ease restrictions of sales of junk like chips and cookies in cafeterias. “Children as young as five could go from having cookies or fries with their lunches once in a while to buying and eating them every day,” writes Jessica Donze Black, who directs the the Kids’ Safe and Healthful Foods Project for the Pew Charitable Trusts.

More egregiously, the proposed House bill would undermine universal free-lunch programs for many high-poverty schools. Under the 2010 bill, when at least 40 percent of students in a school qualify for free lunches, the school can claim “community eligibility”—meaning all students automatically have access to free lunches. The program eases the administrative burden for these financially strapped schools, allowing them to “shift resources from paperwork to higher-quality meals or other educational priorities,” writes Zoë Neuberger of the Center on Budget and Policy Priorities. It also eliminates the “stigma that sometimes accompanies free meals” and increased meal participation, which, in turn, “improves student achievement, diets, and behavior,” she adds.

The House bill would raise the threshold from 40 to 60 percent. If it becomes law, Neuberger writes, more than 7,000 schools—with nearly 3.4 million students—”would have to reinstate applications and return to monitoring eligibility in the lunch line within two years.”

Happily, none of these rollbacks are likely anytime soon, said Margo Wootan, director of nutrition policy for the Center for Science in the Public Interest and a veteran of the school food wars. That’s because first lady Michelle Obama pushed hard for the 2010 reforms, and her husband will veto any school lunch reauthorization bill that attempts to roll them back. Until a new bill passes, the 2010 reforms hold sway, she said. “For once, the status quo is on the side” of people pushing to widen access to free lunch and remove junk food from the cafeteria, she added.