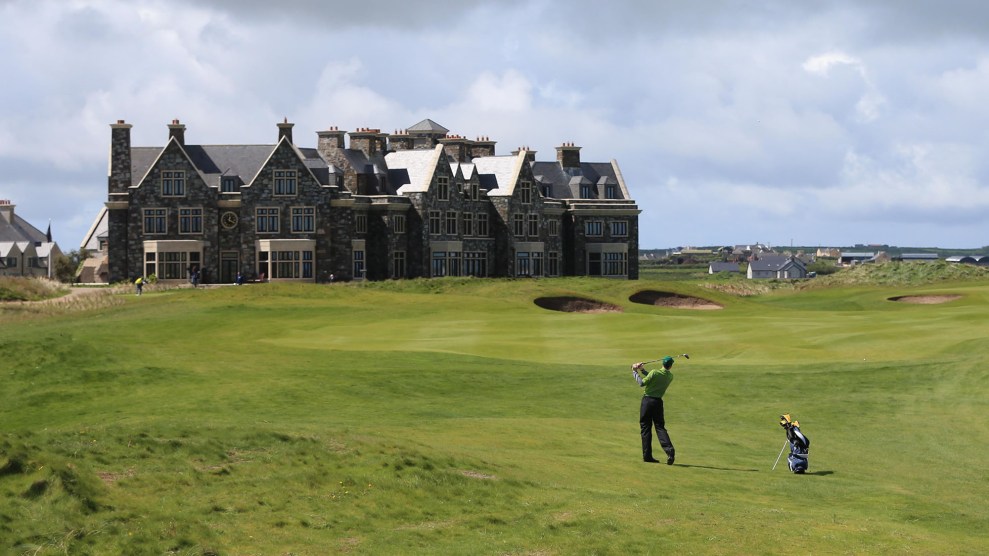 This is Donald Trump’s public position on climate change:

More recently, Trump has claimed that this tweet was some sort of joke, but regardless, he’s repeatedly called global warming a “hoax.” So it was astounding to read in Politico Monday morning that the real estate mogul is trying to persuade government officials in Ireland to allow him to “build a sea wall designed to protect one of his golf courses from ‘global warming and its effects.'” According to Politico:

A permit application for the wall, filed by Trump International Golf Links Ireland and reviewed by POLITICO, explicitly cites global warming and its consequences—increased erosion due to rising sea levels and extreme weather this century—as a chief justification for building the structure.

Days before he concluded his purchase [of the golf club in 2014], a single storm eroded as much as eight meters of frontage in some parts of the golf course. Since acquiring the property, Trump has been trying to build coastal protection works to prevent further erosion.

Earlier this month, Trump’s golf club submitted an application to local officials in County Clare, Ireland, in an attempt to gain approval for the sea wall. An environmental impact statement accompanying the filing argued that if little or nothing is done to combat the coastal erosion, “the existing erosion rate will continue and worsen, due to sea level rise, in the next coming years, posing a real and immediate risk to most of the golf course frontage and assets.”

Trump’s spokesperson didn’t respond to Politico’s request for comment, and she didn’t immediately respond to me, either. But it’s pretty hard to see how anyone could reconcile Trump’s sudden interest in climate resilience with, say, this:

NBC News just called it the great freeze – coldest weather in years. Is our country still spending money on the GLOBAL WARMING HOAX?

And it’s not just sea level rise that apparently has Trump concerned. Politico reports that the golf club distributed a document to residents of the area warning that coastal protections will also be needed to defend against “more frequent storm events [that] will increase the rate of erosion throughout the 21st century.” Which seems like a bit of a departure from this:

Any and all weather events are used by the GLOBAL WARMING HOAXSTERS to justify higher taxes to save our planet! They don’t believe it $$$$!

Of course, this isn’t the only Trump-branded facility that is threatened by climate change. Check out these amazing gifs that BuzzFeed created to show what sea level rise could do to Trump resorts in the United States.