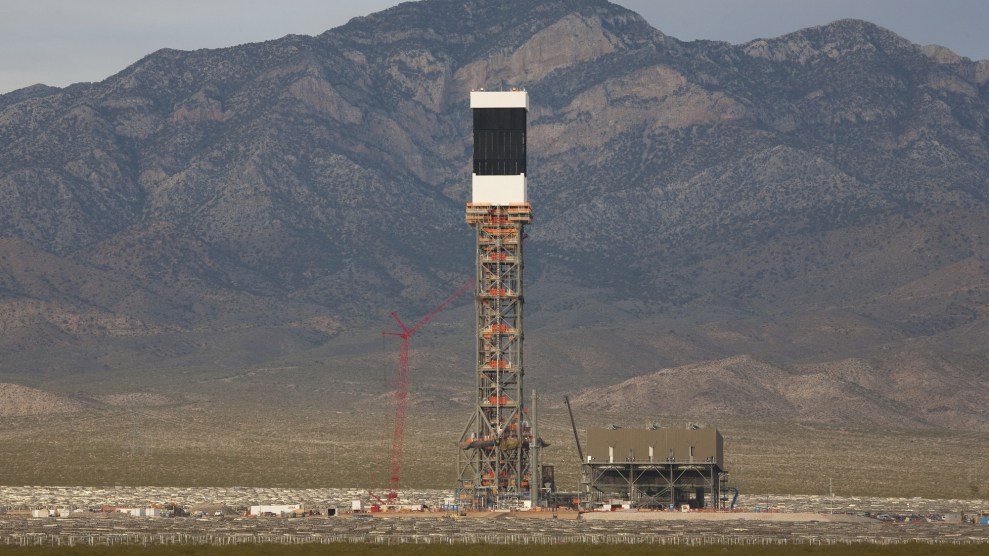 This story originally appeared on WIRED and is reproduced here as part of the Climate Desk collaboration.

Ivanpah, the world’s largest solar plant, is a glittering sea of mirrors, concentrating sunlight into three glowing towers. It is a futuristic vision rising out of the Mojave desert. But from the day the plant opened for business in 2014, critics have said the technology at Ivanpah is outdated and too finicky to maintain.

“Ivanpah has been such a mess.”

The latest problem? A fire at one of the plant’s three towers on Thursday, which left metal pipes scorched and melted. As the plant dealt with engineering hiccups, Ivanpah initially struggled to fulfill its electricity contract, and it would have had to shut down if the California Public Utilities Commission didn’t throw it a bone this past March. “Ivanpah has been such a mess,” says Adam Schultz, program manager at the UC Davis Energy Institute and former analyst for the CPUC. “If [the fire] knocks them offline, it’s going to further dig them in.” On top of the technical challenges, the plant has had to deal with PR headaches like reports of scorched birds and blinded pilots from its mirrors.

Ivanpah’s biggest problem, though, is hard economics. When the plant was just a proposal in 2007, the cost of electricity made using Ivanpah’s concentrated solar power was roughly the same as that from photovoltaic solar panels. Since then, the cost of electricity from photovoltaic solar panels has plummeted to 6 cents per kilowatt-hour (compared to 15 to 20 cents for concentrated solar power) as materials have gotten cheaper. “You’re not going to see the same thing with concentrated solar power plants because it’s mostly just a big steel and glass project,” says Schultz. It can only get so much cheaper.

Photovoltaic solar systems also have the advantage of scaling up or down easily. You can have one panel on your roof or the airport can have 100, and electricity can be made where it’s used. But for concentrated solar power plants, you need a huge tract of empty land. Ivanpah has 173,500 garage door-sized sets of mirrors spread over 3,500 acres. Each mirror has a motor controlled by a computer, which angles the reflective surface to track the location of the sun.

All those moving parts make Ivanpah more challenging to maintain than static solar panels. There’s the 173,500 sets of moving mirrors, and then there’s also the towers, where the concentrated sunlight superheats steam to generate electricity—each with their complicated plumbing systems. “The sheer size of these plants make it easy to overlook one little flaw,” says Tyler Ogden, an analyst at Lux Research. The fire department suggested the fire on Thursday was the result of misaligned mirrors that concentrated their death ray on the wrong part of the tower. David Knox, a spokesperson for Ivanpah’s operator, NRG Energy, said it was still too early to tell the cause of the fire. “We are assessing the damage and developing a repair plan,” says Knox.

Theoretically, concentrated solar power’s advantage is its ability to smooth out energy production. Solar panels produce energy when the sun is shining, and they’re basically roof decorations when they’re not. At Ivanpah, the water in the towers take time to get to electricity-producing temperatures in the morning, but the towers can continue to produce electricity into the early evening—when electricity consumption is coming off its peak. Plants elsewhere, like Crescent Dunes Solar Energy Project in Nevada, have mirrors that concentrate energy into tanks of molten salt instead of water, which can store the energy much longer.