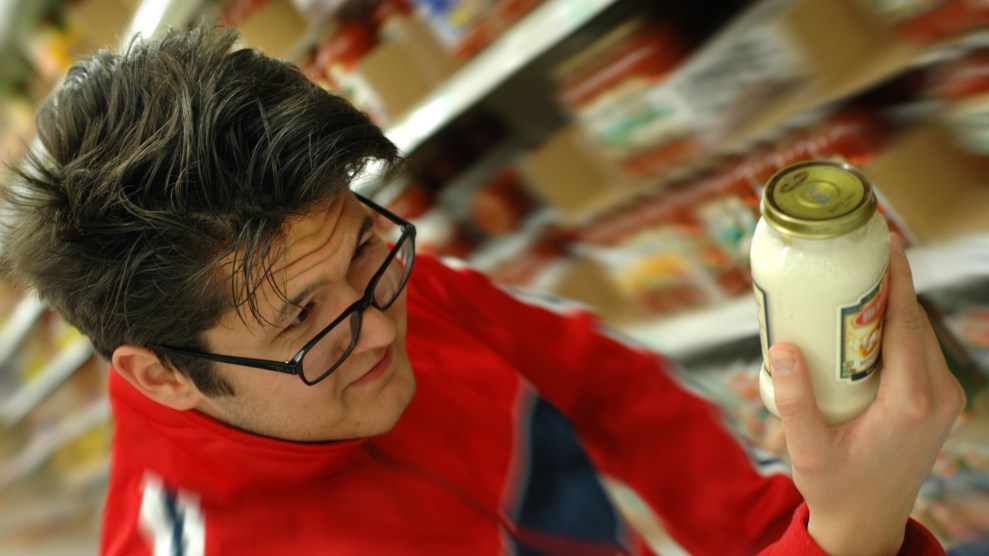 Update (7/14/2016): The House approved the labeling-preemption measure Thursday afternoon. On Wednesday, President Obama signaled he would sign it into law.

Update (7/8/2016): The full Senate approved the labeling-preemption bill by a vote of 63-30 Thursday evening. The measure now goes to the House of Representatives, “where it is expected to pass,” Reuters reports.

Update (7/7/2016): The labeling-preemption compromise bill cobbled together in the Senate Ag committee moved forward Wednesday, winning a procedural vote 65-32, meaning it will be voted on—and likely approved—by the full Senate as early as Thursday night. Drama accompanied the vote. Pro-labeling activists dumped $2,000 in cash on the Senate floor, shouting “Monsanto Money” and “Sen. Stabenow, listen to the people, not Monsanto,” reports The Hill. And Sen. Bernie Sanders (D-Vt.), an opponent of the bill, executed an epic Twitter troll of Senate Ag Committee Democrats, as Quartz explains. Assuming the bill passes the full Senate, it will still need to be approved by the House and signed by the president.

As recently as two weeks ago, the food industry was preparing to place labels on food products that contain genetically modified ingredients. But if a bipartisan deal cobbled together last Thursday in the Senate Agriculture Committee gets signed into law, widespread labeling likely won’t come to pass. Instead, food companies will have the option of disclosing GM ingredients on their products with QR codes that can be read by smartphones, accompanied by only the words “scan here for more food information”—without direct on-package mention of GMOs.

The fight centers on a Vermont law, due to go into effect on July 1, that would require labeling in that state. Rather than go through the trouble of segregating out and labeling products destined for a state with a population 626,000, many huge food companies had instead resigned themselves to labeling nationwide. In recent months, Mars, General Mills, Kellogg, ConAgra and Campbell Soup all announced plans for labeling.

The looming prospect provoked a massive legislative effort, spearheaded by the Grocery Manufacturers Association, to pass a bill in Congress to nullify state labeling initiatives, full stop. Ever since that bill failed to gain traction in the Senate in March, Senate Ag Committee Pat Roberts (R-Kansas) and ranking Democrat Debbie Stabenow (D-Mich.) began working to cobble together a compromise. Under their bill, products that contain GM ingredients will only have to include a QR code, which in-the-know consumers with smartphones can scan.

This week, Roberts and Stabenow began pushing hard for the full Senate to consider their compromise bill, reports Politico‘s Helena Bottemiller Evich. They have industrial agriculture interests at their backs, Evich adds, noting that the American Soybean Association urged its members to email and call their senators “repeatedly until this legislation passes.” Sen. Bernie Sanders (D-Vt.), meanwhile, has vowed to “do everything I can to defeat this legislation.”

Sen. Bernie Sanders has vowed to “do everything I can to defeat this legislation.”

The Senate deal is widely viewed as a defeat for labeling advocates and a victory for the seed/pesticide industry. Andrew Kimbrell, a longtime industry critic and executive director of the Center for Food Safety, denounced the bill in an emailed statement. “This is not a labeling bill; it is a non-labeling bill,” he wrote. “Clear, on-package GE food labeling should be mandatory to ensure all Americans have equal access to product information.” Meanwhile, the Grocery Manufacturers Association, a deep-pocketed trade group funded by major food processors as well as agrichemical/GMO titans like Monsanto, DuPont, and Dow, praised it as the “commonsense solution for consumers, farmers and businesses.”

If the proposed QR-code solution passes, it will preempt Vermont’s law. Whether it will pass the full Senate and House and be signed by President Barack Obama remains to be seen. Stabenow had opposed previous efforts to preempt state labeling laws, so getting her on board was a big step closer to putting a halt to GMO labeling.