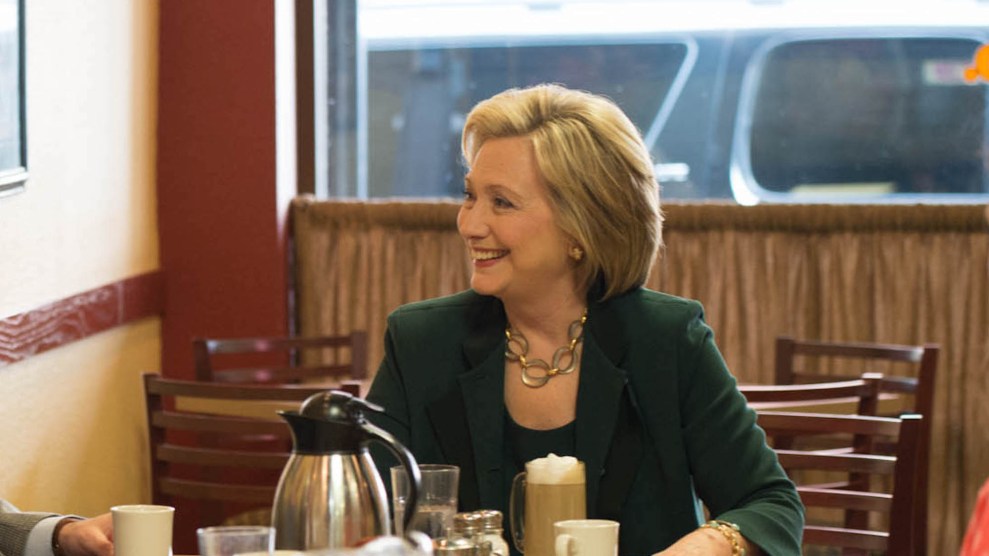 Hillary Clinton enjoys some coffee while campaigning in an Iowa diner last year. <a href="https://flic.kr/p/s9oN5v">Barbara Kinney</a>/Hillary for America/Flickr

If Democratic presidential nominee Hillary Clinton wins in November, what kind of food and farm policy can we expect from her? Like most presidential campaign seasons, the current one has been lighter than a soufflé in terms of debate around food issues. Here’s what we know so far.

(1) The 2016 Democratic Party platform is mostly short on food policy details. Farm programs get all of two paragraphs, under the rubric of “Investing in Rural America.” The section nods to “promoting environmentally sustainable agricultural practices” and expanding “local food markets and regional food systems,” a likely reference to the Know Your Farmer, Know Your Food program instituted under President Barack Obama. It also takes a stand on farm workers, advocating “stronger agricultural worker protections including regulation of work hours, elimination of child labor, ensuring adequate housing for migrant workers, and sanitary facilities in the field.”

In other notable sections, the platform mentions developing “science-based restrictions” to protect Alaska’s wild salmon fisheries from a controversial proposed mine, and it vows to enforce antitrust laws to “protect competition and prevent excessively consolidated economic and political power, which can be corrosive to a healthy democracy.” As I noted a few weeks ago, that section contains the first mention of antitrust policy in a Democratic Party presidential platform in three decades; and if a President Clinton were to make good on it, there could be profound implications for our highly concentrated food industry.

(2) …except one: Clinton will likely defend hunger programs. The platform bluntly promises to protect “proven programs like the Supplemental Nutrition Assistance Program (SNAP)—our nation’s most important anti-hunger program—that help struggling families put food on the table.” SNAP, formerly known as food stamps, has been in the Republican crosshairs for years. President Obama and Democrats in Congress fought off a GOP attempt to slash SNAP in 2013, and there’s no reason to think Clinton won’t hold the line.

While Michelle Obama is widely celebrated for her robust White House garden, Hillary Clinton kept a small one on the roof, Scheib noted.

(3) The State Department hotly promoted GMOs abroad under Clinton. Diplomatic cables dumped by WikiLeaks back in 2010 showed that Clinton’s State Department lobbied foreign governments to weaken regulation of GMOs, including food labels, and operated public relations campaigns to improve their popularity. (More here and here.) Back in 2012, Jack Bobo, then serving as senior adviser for biotechnology at the State Department, even lobbied me to take a less critical view of ag biotech. (Bobo is now the chief communications officer of a biotech company.)

(4) She showed signs of appreciating organic ag as first lady. In the 1990s, before organic food went mainstream, Clinton was a fan. Walter Scheib, whom the first lady hired as White House chef in 1994, later reminisced that the Clintons “dined regularly on organic foods” and favored “both wagyu and grass-fed beef.” He added that “nearly all the product used was obtained from local growers and suppliers.” While Michelle Obama is widely celebrated for her robust White House garden, Hillary Clinton kept a small one on the roof, Scheib noted.

(5) She’s tightly aligned with Tom Vilsack, Obama’s US Department of Agriculture chief. The two veteran pols go way back—Vilsack credits Hillary Clinton’s fundraising efforts on his behalf for boosting his successful run as Iowa governor back in 1998. About a decade later, Vilsack endorsed Clinton in the Democratic presidential primary. Last year, Clinton put longtime Vilsack adviser Matt Paul in charge of her Iowa caucus campaign, plucking him from his post as the USDA’s director of communications. The Clinton team aggressively floated Vilsack as a contender for vice president before settling on Virginia Gov. Tim Kaine for the post. But despite his getting passed over, there was a Vilsack angle—the campaign quickly named Paul, Vilsack’s longtime right-hand man, as Kaine’s chief of staff. Two Washington insiders who declined to be quoted directly have told me that Vilsack is and will likely remain Clinton’s top ag adviser, on everything from policy details to choosing the next USDA chief. That tells me that if Clinton prevails, the next administration will look a lot like the current one on ag policy. Here’s my recent summary of Vilsack’s eight-year run as USDA chief.