Donald Trump calls global warming a “hoax.” He claims climate science is “bullshit,” and he’s even described it (supposedly as a joke) as a Chinese conspiracy. So perhaps it isn’t that surprising that Mike Pence—whom Trump just named as his running mate—has similar views.

“Global warming is a myth,” Pence wrote nearly two decades ago in an op-ed unearthed by BuzzFeed. “Environmentalists,” the Indiana Republican explained, “claim that certain ‘greenhouse gases’ like carbon dioxide are mucking up the atmosphere and causing the earth to gradually warm. Despite the fact that CO2 is a naturally occurring phenomenon in nature, the greenpeace folks want to blame it all on coal (another natural mineral) and certain (evil) coal burning power plants.” He added (inaccurately) that “the earth is actually cooler today than it was about 50 years ago.” 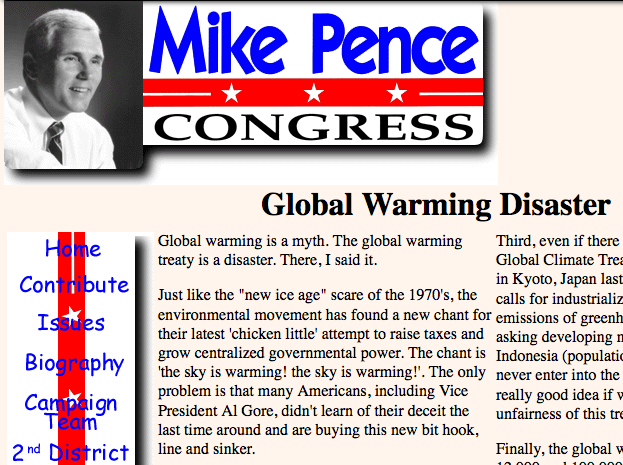 Mike Pence has a long history of rejecting climate science. You can read the full op-ed, preserved by the Internet Archive, by clicking here.

Pence didn’t change his tune much after winning election to Congress. “The theory of global warming is just that—a theory,” he told the Star Press, a Muncie, Indiana, newspaper, in 2002.

Pence told Hardball‘s Chris Matthews in May 2009 that “the science is very mixed on the subject of global warming,” though he added, “I’m sure reducing CO2 emissions would be a positive thing.” He also insisted that there is “growing skepticism in the scientific community about global warming.” You can watch Pence’s comments above.

“The science is very mixed on the subject of global warming.”

As governor of Indiana, Pence doubled down. In a 2014 interview with Chuck Todd, Pence said he doesn’t know if man-made climate change “is a resolved issue in science today” and later added, “We’ll leave the scientific debates for the future.”

Pence has also been an outspoken opponent of policies that would reduce greenhouse gas emissions. He told the Star Press that a cap-and-trade proposal passed by the US House of Representatives in 2009 would raise energy prices and harm the economy. The legislation would have put a limit and a price on the carbon emissions that cause climate change. “I really believe Democratic climate change legislation will cap growth and trade jobs,” he said.

As governor of Indiana, Pence has continued to fight against policies intended to combat global warming. His latest battle? An effort to block President Barack Obama’s Clean Power Plan, a set of Environmental Protection Agency regulations that would limit greenhouse gas emissions from coal-fired power plants. Last year, Pence called Indiana a “proud pro-coal state” on a press call, according to the Indianapolis Star. He vowed to resist the new regulations.

In June 2015, Pence sent a letter to Obama stating that Indiana would refuse to comply with the plan unless there was “significant improvement” to it. As in 2009, he warned of higher electricity prices if the proposal was implemented. He called the rules “a vast overreach of federal power.”

“Your approach to energy policy places environmental concerns above all others,” he wrote to Obama.

Despite Pence’s objections to federal efforts to combat climate change, he apparently has no problem asking the federal government to fund green jobs in his state. As Think Progress reported, in 2009 Pence wrote a letter to then-US Secretary of Energy Steven Chu supporting a grant application submitted by an Indiana company that wanted to use algae to produce fuels. “Algae production directly addresses all of the significant challenges being faced by the US,” wrote Pence, “namely domestic energy security, greenhouse gas emissions, scientific leadership in a variety of industries, and broad-based green job creation.”