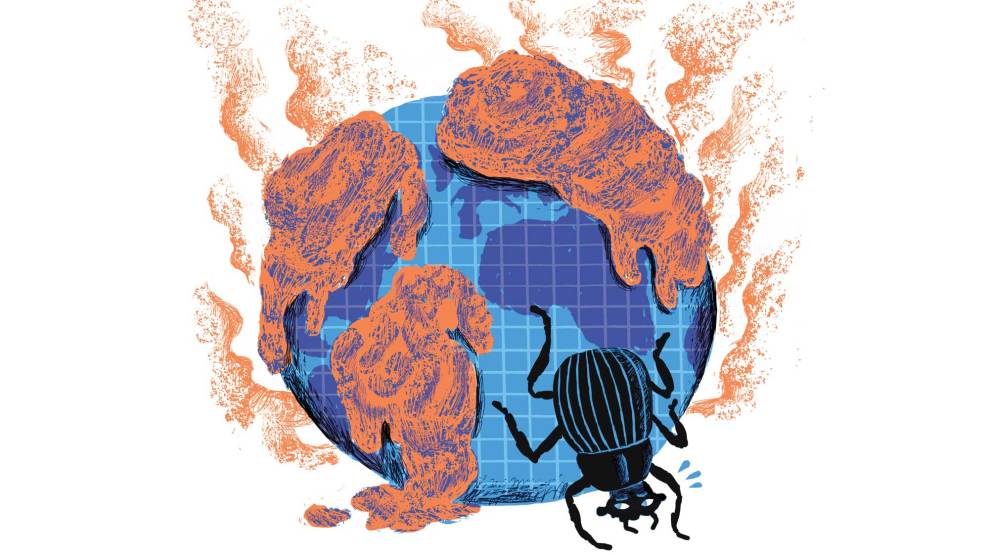 To the extent that we think about them at all, people tend to regard dung beetles as entertainment, rolling, tumbling, even somersaulting over massive balls of elephant poop. But the 5,000 or so species at work on every continent except Antarctica are as important as pollinators.

Animals unload an estimated 100 billion tons of dung on Earth every day. Just one cow can drop 20 cowpats daily and quickly smother a landscape in manure. By bringing poop back to their underground nests and feeding it to their young, dung beetles not only clear pastureland and reopen it for grazing, but also help to cycle nutrients through the land, aerate soil, disperse seeds, and reduce the output of methane by 40 percent. Dung beetles “can potentially do in 48 hours what would take a couple years” for nature to accomplish without them, a Missouri livestock researcher recently enthused. Studies have valued the services provided by dung beetles to the cattle industry in the United States and the United Kingdom alone at about $910 million a year.

But like pollinators, dung beetles are now in trouble. That’s partly from habitat loss, as forests and grasslands give way to agriculture. Poachers who kill 33,000 elephants and 1,200-plus rhinos every year also hurt dung beetles, because there’s less poop for them to eat.

A bigger threat to their survival, though, may come from one of our most successful humanitarian efforts. Ivermectin, an antifilarial drug, is the essential tool in eradicating river blindness from the developing world. It’s also the standard treatment for infection by a microfilarial worm that can cause elephantiasis, a grotesque swelling of the lower limbs. Over 30 years, ivermectin, distributed for free for these purposes by Merck & Co., has lifted hundreds of millions of the world’s poorest people up from disability and despair. This past fall, the developers of ivermectin earned a share of the Nobel Prize in Physiology or Medicine. It would be hard to imagine a discovery more worthy of the honor.

Ivermectin is also one of the most widely used veterinary drugs and, for many years, it made Merck more than $1 billion a year. Livestock producers all over the world administer it to control liver flukes, eye worms, lungworms, roundworms, mites, horn flies, ticks. In case all this seems remote, it also prevents your dog from getting heartworm and can cure your kids of head lice.

But a little-noticed study in the journal Scientific Reports suggests the drug has a major downside: Anywhere from 62 to 98 percent of every dose ends up in “highly toxic concentrations” in the recipient’s droppings, where it eventually gets consumed by dung beetles.

When that happens, ivermectin can disrupt a dung beetle’s ability to use its antennae to communicate, find a mate, or locate food. Even if the dung beetle could find its way, ivermectin also interferes with the movement of muscles in its forelegs.

When ivermectin knocks down the population of dung beetles in a cattle field, an extra 312 pounds of dung can pile up on every acre every year.

The study links the drug to the decline of seven dung beetle species across the Iberian Peninsula and by implication to similar declines elsewhere. To which anyone who has ever witnessed a person suffering the horrible effects of river blindness or elephantiasis might well reply, “So what?”

The answer looms larger than we might think: Ivermectin may be doing to dung beetles what DDT did to birds, what diclofenac did to vultures in India, or what neonicotinoid insecticides are thought to be doing to honeybees, now in decline worldwide. Companies keep finding great products to control one big problem without “thinking downstream at all,” said Sacha Spector, an environmental program director at the Doris Duke Charitable Foundation.

For instance, said Elizabeth Nichols, a Swarthmore College biologist, a healthy dung beetle population rapidly reduces the standing dung heaps that would otherwise host a variety of disease-causing worms. Anything that impairs that ability can inadvertently increase the number of pests and parasites—and thus the diseases that affect some of the poorest people on Earth. “It’s ironic,” she said, “when you consider that we blanket large parts of the world with ivermectin” to treat diseases.

By one estimate, when ivermectin knocks down the population of dung beetles in a cattle field, an extra 312 pounds of dung pile up on every acre every year. More than a quarter of Earth’s ice-free land—nearly 8 billion acres—is now being used to graze livestock, which means the great pileup is happening everywhere. And an extra burden of dung makes fields less productive, driving farmers to clear more land for pasturage.

So is there anything to be done? An article last year in Progressive Cattleman advised readers to administer ivermectin in injectable form so less of the drug passes through the animal and onto the field—and to use it only during cooler weather when dung beetles are dormant and there may be fewer cattle in the fields. But in warm climates “there really isn’t a good time to do that,” said Norm Conrad, an agricultural specialist. He suggests limiting ivermectin treatment in animals to cases where parasitic infections are severe. That could have the added benefit of delaying the spread of ivermectin resistance, which has already begun to appear in some livestock parasites. Researchers are concerned it might also emerge in parasites that plague humans. People with river blindness infections have to take the drug once or twice a year for up to 18 years for a full cure. Widespread resistance to the drug, just as the world is on the brink of eradicating the disease, would be catastrophic.

They might not be as easy to romanticize as honeybees or butterflies flitting from flower to flower, but dung beetles rank high among the little things that run the planet. Given the potential effects of losing them, something about ivermectin no longer smells quite right.