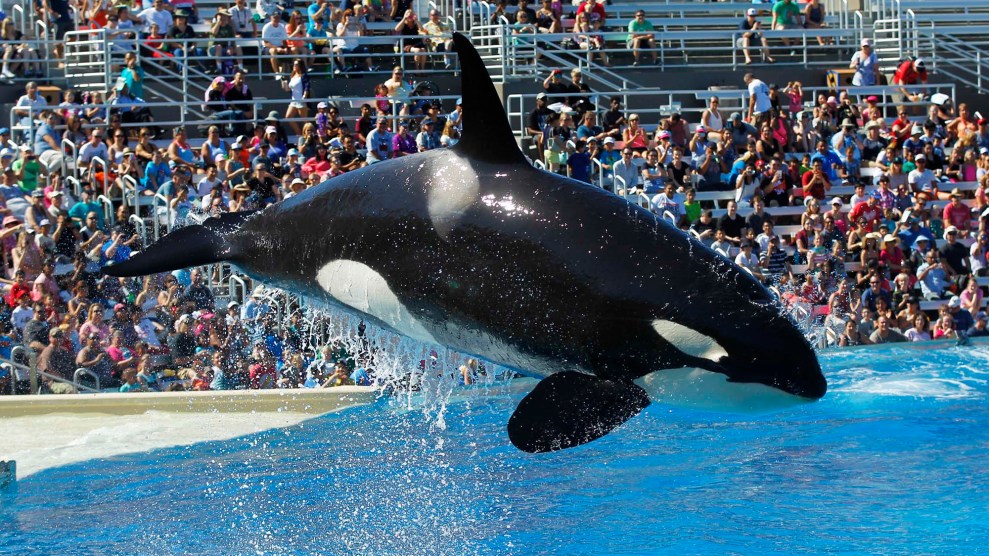 SeaWorld has been a lightning rod for controversy in recent years, and no one knows that better than John Hargrove. On this week’s episode of the Inquiring Minds podcast, Hargrove—a former SeaWorld animal trainer—recounts his experiences working with orcas in captivity. From heavily medicated killer whales to the tragic death of his colleague, Hargrove paints a picture of an entertainment company in crisis.

SeaWorld, a nationwide chain of parks well known for its displays of marine animals, purports to blend “imagination with nature” and enable visitors to “explore, inspire and act.” It’s perhaps most famous for its orcas. Also known as killer whales, orcas are actually the largest member of the dolphin family. They weigh thousands of pounds and are, in the words of National Geographic, “one of the world’s most powerful predators.” SeaWorld’s treatment of orcas has come under intense scrutiny; the 2013 film Blackfish recounted the death of SeaWorld trainer Dawn Brancheau and showed the dangers (for both whales and humans) of keeping orcas in captivity. Hargrove appeared in the film.

Trying to outswim an orca is impossible, says Hargrove—it just makes it more fun for the giant predator to hunt you.

Hargrove spent most of his time at SeaWorld as an orca trainer. Since he left, he has repeatedly accused the company of mistreating animals and endangering employees. Representatives of SeaWorld have denied these allegations, telling NPR in 2015, “We don’t put any animal in any stressful situation” and calling conditions depicted in Blackfish “a bit of exaggeration.” (You can read the company’s point-by-point rebuttal to Blackfish here.) When Hargrove came out with a book criticizing the company, SeaWorld denied many of his claims and said that he had quit the company “‘after being disciplined for a severe safety violation involving the park’s killer whales’ that resulted in his transfer from the orca stadium,” according to the Orlando Sentinel. (Hargrove denied that he was responsible for the safety violation, according to the paper.) SeaWorld also released a video showing Hargrove repeatedly using the n-word while intoxicated several years earlier. (“We do a lot of things we shouldn’t do when we drink,” Hargrove told the Sentinel. He went on television to apologize for the video.)

On Inquiring Minds, Hargrove tells co-host Indre Viskontas that it wasn’t just his colleagues who were in danger. Hargrove says he had multiple encounters with aggressive killer whales over the course of his career. In one incident, which took place when Hargrove was working at a different park not owned by SeaWorld, he describes escaping a close call with an orca named Freya, who he says had pulled him underwater before. When she wasn’t responding to his signals, Hargrove made a decision that he believes may have saved his life. Rather than swimming like mad for dry land, he moved to the center of the pool and waited for Freya to approach. Trying to outswim an orca is impossible, says Hargrove—it just makes it more fun for the giant predator to hunt you. If he had tried to make an escape, he says, “that would have equaled almost certain death for me.” In the end, Freya’s behavior changed. She followed Hargrove’s instructions and even helped push him out of the pool. (You can listen to the interview below.)

But two other trainers, Brancheau and Alexis Martinez, weren’t so lucky. Both died after being viciously attacked by orcas owned by SeaWorld. Martinez, who worked at a non-SeaWorld park, was killed in December 2009 by a whale on loan from SeaWorld. Brancheau died two months later at SeaWorld’s Orlando park after being violently attacked by a whale named Tilikum. “It was not a shock to me that he had done that to her,” recalls Hargrove. “I know he was capable of it. All the whales are capable of it.”

For Hargrove, SeaWorld was a childhood fantasy gone terribly wrong. While he had dreams of working at the park as a child, he soon discovered that the relationship between man and whale wasn’t what he had envisioned. Hargrove claims he and his colleagues were frequently hurt on the job. And he says he often worked while sick or injured—diving deep into cold water and sometimes emerging spewing bloody sinus tissue.

“It was not a shock to me that he had done that to her,” recalls Hargrove. “I know he was capable of it. All the whales are capable of it.”

SeaWorld declined to respond to detailed questions about Hargrove’s allegations on Inquiring Minds, but the company did say in an email that many of Hargrove’s claims are “false.”

Since leaving SeaWorld, Hargrove has become an activist and has written a book called Beneath the Surface: Killer Whales, SeaWorld, and the Truth Beyond Blackfish. He’s now a central figure in the campaign to alter the way SeaWorld does business. And that campaign seems to be having an impact. Earlier this year, the company agreed to end its orca breeding program and to change the way it exhibits its orcas.

“Society has changed and we’ve changed with it,” SeaWorld said in an email. “We’re focusing our resources on real issues that help far more animals, like working with [the Humane Society of the United States] to fight commercial whaling, shark finning, and continuing our efforts to rescue, rehabilitate and release injured and sick animals to the wild.”