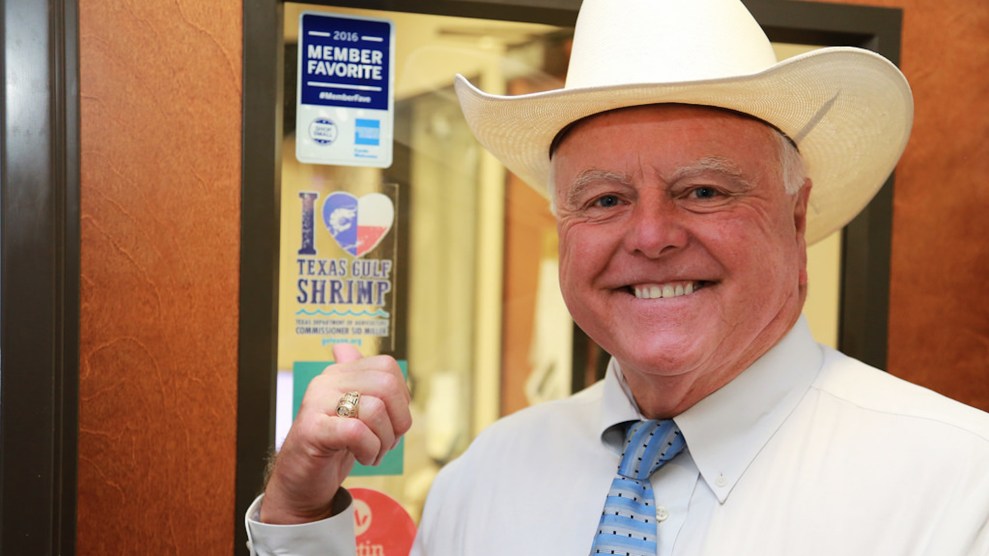 Update (8/17/2016): The Trump campaign finally released its full Agricultural Advisory Committee, and Sid Miller was not named a co-chair, despite what he said on an Aug. 5 radio show. Charles Herbster remains the sole national chairman. However, Miller was named to the committee—along with more than 60 others.

Like the rest of Donald Trump’s campaign, the GOP presidential nominee’s effort to lasso support from agribusiness interests and rural voters keeps getting weirder.

A few weeks ago, Trump tapped Charles Herbster—a Nebraskan best known for his fat checks to GOP candidates and his bizarrely diversified business, Conklin—as chairman of his Agricultural and Rural Advisory Committee. On Friday, Sid Miller, Texas’ colorful agriculture commissioner, announced that he had agreed to serve as co-chair of the committee. (Hat tip Politico).

Miller has emerged as a notorious figure in Texas politics. Seldom seen without a big white cowboy hat, Miller is a “world champion rodeo competitor” and a founder and elder of the Cowboy Church in his home county of Erath, outside of Fort Worth. He runs a landscaping-nursery business as well as farm operations that received about $124,000 in crop subsidies and disaster-relief funds between 1995 and 2014, according to the Environmental Working Group farm subsidy database.

For his successful campaign for Texas ag commissioner in 2014, Miller tapped former rocker/reality TV personality and longtime gun nut Ted Nugent as the co-chairman and treasurer of his campaign. Before that, Miller served for years in the Texas Legislature, where he was a founding member of the Tea Party Caucus is 2010. After leaving the Legislature in 2013, Miller quickly set up shop as a lobbyist, bringing in between $205,000 and $405,000 in contracts, according to filings with the Texas Ethics Commission.

His tenure as Texas ag commissioner has been a ride worthy of one of his beloved rodeos. Soon after taking office, Miller launched a campaign to make public schools safe spaces for junk food, granting “amnesty” to cupcakes and reversing bans on deep-fat fryers and soda machines. He grabbed headlines for handing plum state jobs to campaign contributors, and for comparing Syrian refugees to rattlesnakes on Facebook and suggesting nuclear bombs should be dropped on Muslim countries. As if taking advice from The Donald himself, Miller declined to apologize for those inflammatory posts, though he did delete them.

But his most celebrated exploits involve trips initially billed to taxpayers as official state business—one to Oklahoma to receive a medical procedure known as “the Jesus shot,” administered by a convicted felon known as Dr. Mike; and another to Mississippi to attend the Dixie National Rodeo, where he reportedly won $880 in a calf-roping competition. In both cases, Miller eventually relented and picked up the travel tabs on his own dime.

In the Lubbock radio interview where he announced his association with Trump, Miller gave few details about what sort of agriculture agenda the candidate would push. “My emphasis will be carrying the Texas ag industry for Trump,” he said. He denounced “overregulation,” naming the Environmental Protection Agency, the Bureau of Land Management, and the Endangered Species Act as regulatory forces Trump would reckon with.

And he sought to turn one of Trump’s liabilities in agribusiness circles, his opposition to industry-friendly trade deals like the Trans-Pacific Partnership, into an asset. “Above all, [Trump wants] to be known as the president that cuts the good deals,” he said, adding, “He’s a deal maker, that’s his whole mantra.” Trump will use that skill to “shore up” food exports to China, Miller insisted, not noting that US food sales to China more than tripled between 2006 and 2014 (more here). He also asserted that “America will get our respect back around the world, because his [Trump’s] personality is, if you hit me, I’m going to hit you twice.”

Asked if he would accept a job in a Trump administration, Miller said he’d “have to pray about it…but right now, I’ve got the best job in the state of Texas.”