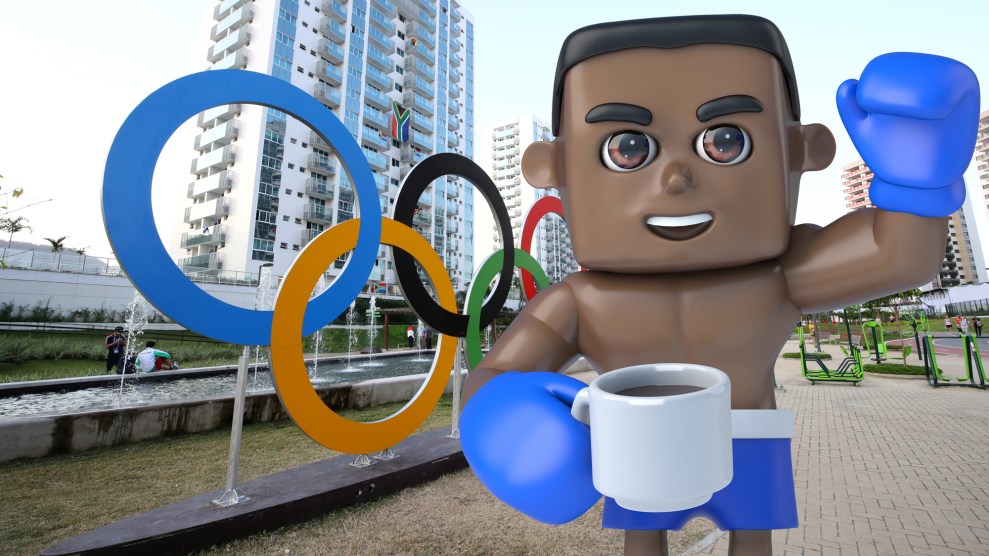 Brazil has been the globe’s most prolific coffee-producing nation for 150 years; and coffee culture has long permeated Rio de Janeiro, where you can find everything from a cheap cafezinho (little cup of coffee) at a corner cafe to super fancy brews extracted from the nation’s best coffee beans. But if you’re an athlete holed up in Olympic Village for the games, things are apparently a bit different. Here’s NPR:

BLOCK: This will be the second Olympics for Egyptian archer Ahmed El-Nemr. He’s mostly happy, but there is a problem.
AHMED EL-NEMR: Actually, yes, I have some complains about coffee (laughter).
BLOCK: He’s been shocked to find there is no coffee for athletes in the village apartment buildings or at the sports venues.
NEMR: I asked. They said we are only limited to Coca-Cola products. So…
BLOCK: You’re kidding me.
NEMR: No. Yeah, that’s what they told us in the venue.

What? No coffee for Olympic athletes in the globe’s coffee epicenter, because…Coca-Cola? According to the Daily News, “A Coca-Cola spokeswoman denied the archer’s claim and said there is coffee in the Olympic Village but it isn’t being supplied by the company.” But apparently, it’s not very easy to find. This must not stand. If I were an athlete in Rio, I’d organize a revolt. And I would not be mollified by some crap like this—I’d want a fresh cup of coffee. In solidarity with my coffee-loving brothers and sisters in the Village, I’ve done a Google dive into catering and sponsorships at the Games to try and figure out what’s going on.

“He’s been shocked to find there is no coffee for athletes in the village apartment buildings or at the sports venues.”

I found a Rio 2016 “Taste of the Games” document that lists the sugary beverage behemoth as the “exclusive” provider of non-alcoholic beverages for the 2016 event, including for its 17,500 athletes. (McDonald’s is listed as the exclusive provider of retail food services, and Skol—a Brazilian brand owned by global beer giant AB InBev, maker of Budweiser—is the exclusive beer provider.)

What does “exclusive” mean? “What this means to caterers is that if menus include products from a sponsor product category, the products of that sponsor must be used unless Rio 2016 approves otherwise in writing.” However, “this does not mean that all food and beverage products must be sourced from these organisations alone,” the document continues. Drinks not offered by the sponsor—in the case of Coca-Cola, say, a fresh cup of joe—can be provided, with the stipulation that it be unbranded. Easy enough for a damn cup of coffee.

So, under the terms of the sponsorship, the Olympic village can provide fresh coffee. But is there a right to coffee? Here the document is muddy. It contains this line about services to be provided to the athletes: “Supply of snacks, fruit, isotonic [sports, ugh] drinks, soft drinks, mineral water, tea and coffee, biscuits, cereal bars and other items at Athletes’ lounges in competition and training venues.”

Note that this clause mentions “Athletes’ lounges in competition and training venues,” but doesn’t mention the living quarters, where El-Nemr tells NPR he’s being denied coffee—and where athletes wake up in the morning. Coffee time, in other words. Here’s what the document says about that region:

•     24/7 catering service at the Main Dining Hall in the Olympic Village
•     High-quality menu with wide range of options, in line with different cultural and nutritional needs in every location serving Athletes.

Not to play Olympic Village lawyer, but that last bit to me sounds like a right to coffee—morning coffee fuels many cultures across the globe. If I were an athlete in Rio, I’d print out that doc, put a big circle around that clause, and take it directly to a Rio 16 official, preferably trailed by a band of annoyed and imposingly athletic fellow coffee fiends.