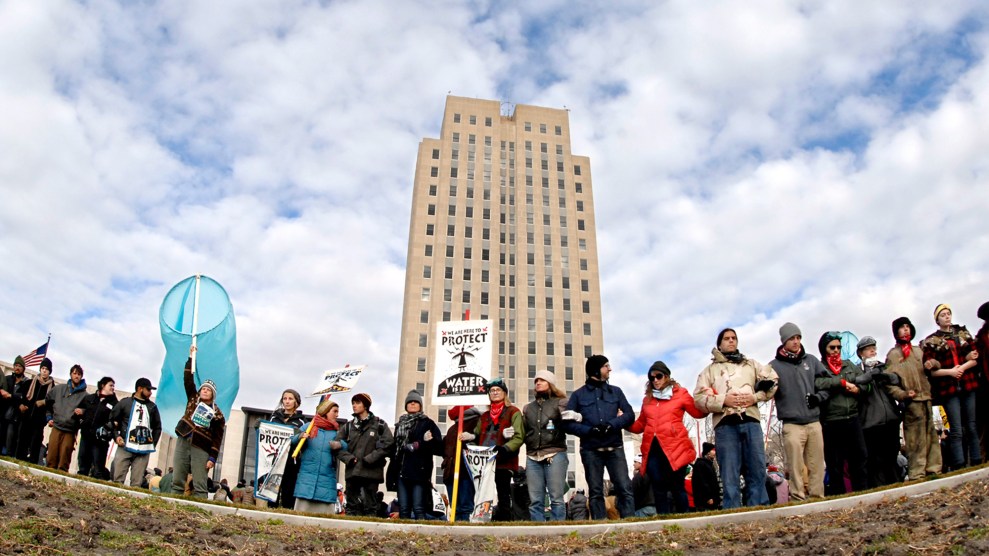 On Monday, the Army Corps of Engineers announced that it would not allow completion of the Dakota Access Pipeline (DAPL) until there has been additional research into its possible environmental risks. This marks a temporary victory for the activists who have been encamped near the site of pipeline construction next to the Standing Rock Sioux reservation in North Dakota.

Of particular concern is the pipeline’s proposed crossing under the Missouri River, which activists fear will threaten Lake Oahe, the Standing Rock Sioux’s drinking water supply. In a statement, Assistant Secretary of the Army Jo-Ellen Darcy said that “in light of the history of the Great Sioux Nation’s dispossessions of lands [and] the importance of Lake Oahe to the Tribe,” the Standing Rock Sioux tribe will be consulted to help develop a timetable for future construction plans.

Energy Transfer Partners, the company building the pipeline, denounced the Corps’ decision “as unjust and a reinforcement of the [Obama] Administration’s lack of interest in enforcing and abiding by the law.”

Trump has invested between $500,000 and $1 million in the company building the pipeline.

The company has deep ties to the incoming Trump administration and many anti-pipeline activists fear that it will reverse or undermine the Corps’ decision. In an earnings call last Thursday, Energy Transfer Partners CEO Kelcy Warren said he is very “enthusiastic” about the election of Donald Trump. His remarks suggested that despite the environmental concerns raised by the Corps, the Department of Justice, and the Standing Rock Sioux, he believes President-elect Trump may help the company complete the pipeline. “We find ourselves in, I believe, a really good position,” he said. “Overall,” he continued, “I’m very, very enthusiastic about what’s going to happen with our country.”

Trump has invested between $15,000 and $50,000 in Energy Transfer Partners, according to financial disclosure forms. Warren donated more than $100,000 to help elect Trump. Trump also owns stock worth between $100,000 and $250,000 million in Phillips 66*, which will own a 25 percent share of the finished pipeline. One of Trump’s key energy advisers is North Dakota Rep. Kevin Cramer, who has encouraged him to dismantle key aspects of the Clean Water Act, which gives the Army Corps and the Environmental Protection Agency authority to regulate the nation’s waterways and wetlands.

Energy Transfer Partners’ stock price rose from $33.37 to $38.68 in the week after the election. However, the conflict over the pipeline has caused investors to express doubt about its financial viability. Last week, Norwegian bank DNB said it was “concerned” about the situation and might withdraw its $342 million loan to Energy Transfer Partners, about 10 percent of the entire project’s funding. A spokesman said the bank would “encourage a more constructive process to find solutions to the conflict that has arisen.” Citigroup also announced last week that it had urged Energy Transfer Partners to reach a peaceful resolution with opponents of the project. Warren has not made any public statements since the Army Corps’ decision Monday.

The Standing Rock Sioux and hundreds of “water protectors” have been protesting against the pipeline for several months. The pipeline is planned to continue under the Missouri River, coming within 1,500 feet of Lake Oahe. The protesters have sought to block construction as long as possible, either forcing Dakota Access to reapply for a federal construction permit or to reroute the pipeline. On Tuesday, thousands of their supporters are engaging in nationwide protests targeting the pipeline and its financial backers in cities, including New York and Washington, DC.

The company currently lacks permits to tunnel beneath the Missouri River, but its employees have been working full time and have completed construction on both sides of the river. The construction site is surrounded by protective barricades in preparation for drilling under the water. “Starting construction [under the Missouri River] without permits would be beyond the pale, even for Dakota Access,” says Jan Hasselman, an attorney for the Standing Rock Sioux tribe.

The Obama administration has repeatedly asked Dakota Access, an Energy Transfer Partners subsidiary, to postpone the project pending additional review of its potential impact. On November 6, the Army Corps of Engineers requested that Dakota Access halt construction to consider concerns that the pipeline would endanger the Standing Rock Sioux’s water supply and could destroy Native cultural sites. That same day, on a hill overlooking the Missouri, protesters gathered to pray at a sacred burial ground along the pipeline’s path. Dozens were teargassed by police and shot with rubber bullets while construction continued under the protection of sheriff’s deputies.

#NoDAPL protestors teargassed while standing peacefully in the water pic.twitter.com/GYGCpY4ecP

The next day, a Corps spokesman told Bloomberg News that the company had agreed to a slowdown. But on Election Day, Dakota Access denied agreeing to the slowdown and vowed to continue construction. “To be clear, Dakota Access Pipeline has not voluntarily agreed to halt construction of the pipeline in North Dakota,” it said in a press release. “Dakota Access has now completed construction of the pipeline on each side of Lake Oahe and is currently mobilizing horizontal drilling equipment to the drill box site in preparation for the tunneling under Lake Oahe.”

According to the press release, Dakota Access promised it would complete construction of the pipeline within two weeks and would then begin drilling under the Missouri River, despite lacking the necessary permits or easement from the Army Corps of Engineers. A DAPL spokeswoman told the Guardian that the company was confident that it would receive the easement. On November 9, Colonel John W. Henderson, head of the Army Corps of Engineers for the region, released another letter criticizing Dakota Access’ refusal to pause construction.

“I don’t know why the government just kept asking DAPL to stop. Clearly they’re not going to stop unless we make them.”

Yet in the past week, Dakota Access set up HESCO barriers—bulwarks used by the US military to defend its bases in Iraq and Afghanistan—around their construction site. “I don’t know why the government just kept asking DAPL to stop,” says LaDonna Allard, a local Sioux woman who is hosting protesters on her land near the Missouri River. “Clearly they’re not going to stop unless we make them.”

“The company seems emboldened by Trump’s victory,” says Harry Beauchamp, an Assiniboine Indian from Montana who came to Standing Rock in September to protest the pipeline. “They’re plowing ahead and ignoring the citizens here who oppose this pipeline with greater force than ever. They know Trump is one of them—they just care about money, not about democracy or justice or the environment or the local citizens.”

Correction: An earlier version of this article misstated the size of Trump’s investments in Energy Transfer Partners and Phillips 76.