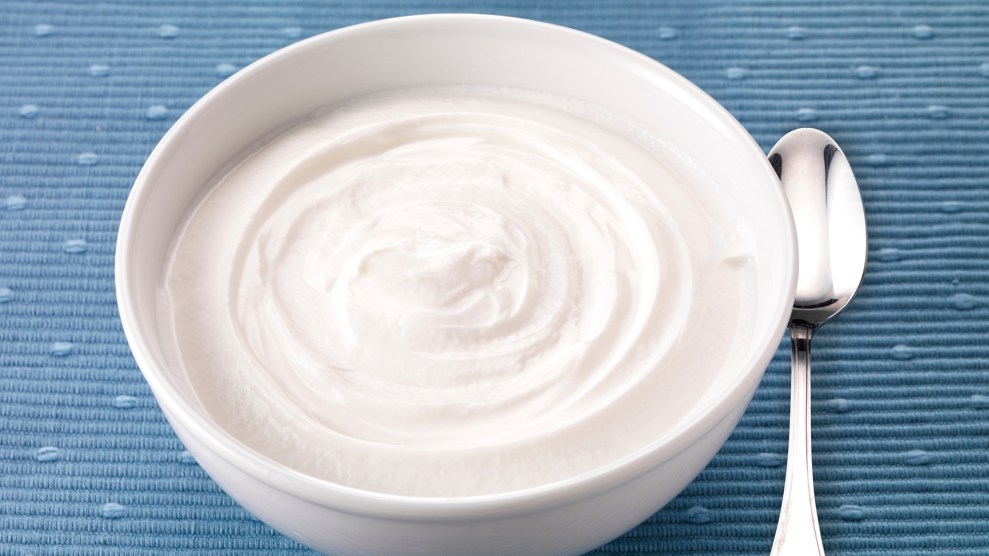 The alt-right movement—a catch-all name for the once-fringe band of white supremacists now basking in the tangerine glow of Donald Trump’s presidential campaign—has a beef with Chobani, a popular brand of Greek yogurt.

According to the New York Times, the company’s founder, Hamdi Ulukaya, a Turkish immigrant of Kurdish descent, “has stepped up his advocacy” for the rights of immigrants and refugees, by “employing more than 300 refugees in his factories, starting a foundation to help migrants, and traveling to the Greek island of Lesbos to witness the crisis firsthand.”

For his trouble, Ulukaya has inspired death threats, the Times reports, as well as such thoughtful Twitter interventions as:

Because this douche bag is tied to Clintons and he’s NOT an American citizen! BOYCOTT CHOBANI PRODUCTS! https://t.co/M2YG4O1et4

Chobani Yogurt, has publicly stated that 30 percent of his company’s 2,000 employees are refugees.#BoycottChobani

But why stop at #BoycottChobani? Seems like the principled stance would be to swear off all foodstuffs that rely heavily on immigrant labor. Such an America-first diet would not only count as an eloquent statement of xenophobic rage; it would also likely result in rapid weight loss. Followers of Pepe the Frog, here are some foods to avoid.

• Dairy: Boycotting just a single brand of yogurt is for milquetoasts. According to a 2015 study commissioned by the National Milk Producers Federation, “Immigrant labor accounts for 51 percent of all dairy labor, and dairies that employ immigrant labor produce 79 percent of the U.S. milk supply.”

“Little Somalia” neighborhoods are sprouting up in dozens of towns across the Great Plains, and slaughterhouses are hiring Somali translators for the cutting floors and installing Muslim prayer rooms for employees. Ahmed was now just one in a wave of several thousand Somalis being lured to the meatpacking floors, ready to take jobs that—at $13 or $14 per hour—easily marked the best-paying work they could find.

As for poultry slaughterhouses, about half of workers are Latino and “a quarter do not possess legal documents to work in the United States,” according to the National Center for Farmworker Health.

• Seafood: Around 90 percent of seafood consumed in the United States is imported—from countries like China, Thailand, Vietnam, Indonesia, and Chile. As for robust domestic fisheries like the Gulf of Mexico and New England, processing facilities are largely staffed by immigrants.

• Fruits and vegetables: According to the latest US Department of Agriculture numbers I can find, nearly half of US crop farm workers are undocumented migrants, and another 20 percent are immigrants with papers.

• Restaurant food: According to a 2014 analysis by the Economic Policy Institute, 29.9 percent of cooks in US restaurants are non-citizens, as are 33 percent of dishwashers and 25.8 percent of table-bussers.

Once they’ve purged their diets of such impure foods, perhaps these folks can document what they do manage to eat and come out with a book. The Alt-Right Diet won’t likely do much to make America great, but it certainly would help make its followers skinny, and fast.