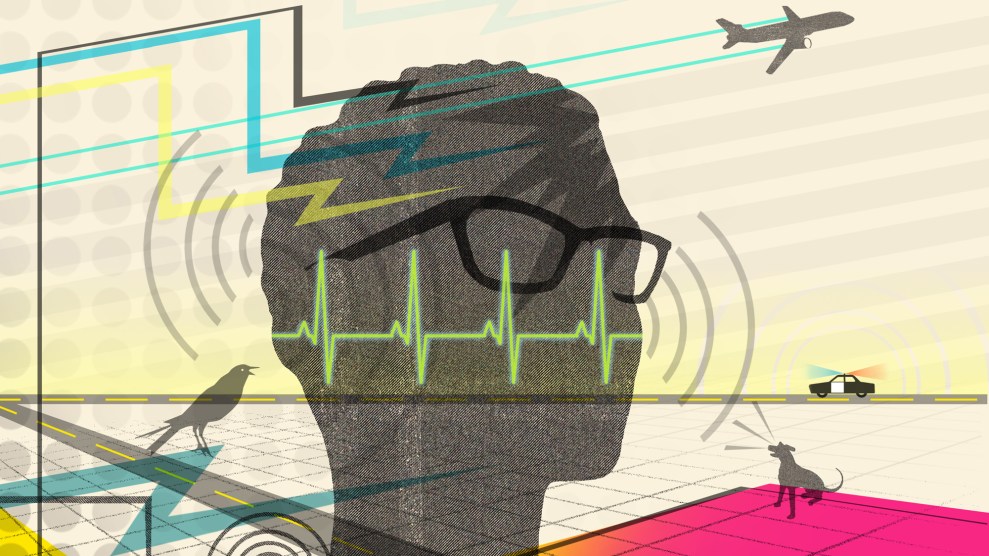 If you’re a tree frog or an ovenbird in mating season and you happen to live in the 83 percent of the continental United States that lies within 3,500 feet of a road, bummer for you. Not only are you more likely to collide with an SUV, but you’re going to have a harder time finding a mate. Research suggests that human-generated noises also mess with nesting behavior, predator-prey dynamics, and sleep patterns. In other words, wildlife gets stressed out by noise.

The physical responses that helped save our asses from predators back on the veldt have obvious downsides in the middle of a school lesson.

So do we, it turns out—and the world is getting louder. Scientists define “noise” as unwanted sound, and the level of background din from human activities has been doubling roughly every three decades, beating population growth. Road traffic in the United States has tripled over the last 30 years. By 2032, the number of passenger flights is expected to be nearly double the 2011 figure—at peak hours, planes are even audible overhead 70 percent of the time in the remote backcountry of Yosemite National Park. And while that’s obviously a nuisance for animals and visitors seeking a restorative experience, this growing anthropophony (a fancy word for the human soundscape) is also contributing to stress-related diseases and early death, especially in and around cities.

By evolutionary necessity, noise triggers a potent stress response. We are more easily startled by unexpected sounds than by objects that come suddenly into our field of vision. Our nervous systems react to noises that are loud and abrupt (gunshots, a backfiring engine), rumbling (airplanes), or whining and chaotic (leaf blowers, coffee grinders) by instructing our bodies to boost the heart rate, breathe less deeply, and release fight-or-flight hormones.

But the physical responses that helped save our asses from predators back on the veldt (and still might prove useful at a busy intersection) have obvious downsides in the middle of a school lesson or while you’re trying to get some sleep—especially if, like me, you live near a major airport. On the flip side, positive sounds like chill music, pleasing birdsong, and the voices of loved ones stimulate the brain’s emotional centers, bringing feelings of joy, calm, and well-being.

To learn more, I paid a visit to biobehavioral psychologist Joshua Smyth, who studies human responses to stress at his Pennsylvania State University laboratory. An affable guy who resembles a younger Al Franken, Smyth first hooked me up to a portable heart monitor and had me spit into a test tube to measure my baseline cortisol levels before giving me what was essentially a personality test to see how sensitive I am to unwanted sounds like, say, a roommate’s loud music. While the results suggested I am neither neurotic nor particularly introverted—both of which can predispose a person to noise annoyance—I scored a high 5.2 (adults average 4, college students 3.5), which put me near the 88th percentile.

Pleasing natural sights and sounds are good for the heart and mind—our human cacophony, not so much.

Then came the fun part. To see how different types of sound affect my ability to recover from life’s ordinary stresses, Smyth first had to stress me out: Cue public speaking. He asked me to deliver a short extemporaneous speech in front of a large mirror, behind which, Smyth told me, sat a panel of judges. Several times during the five-minute speech, a lab technician interrupted and told me to speak up.

This gauntlet of misery is called the Trier Social Stress Test, and even though I knew there was no “panel of judges,” I exhibited a textbook response. My heart rate climbed from the mid-60s to the mid-90s, and my cortisol, an imperfect but suggestive marker of stress, almost doubled.

Next, Smyth assigned me one of three recovery exercises he uses: a video of a pretty summer meadow featuring chirping birds and a blue sky. As I watched, my heart rate fell to its mid-60s baseline range. A couple of minutes into the video, the abrupt rumbling of a truck engine upped my heart rate by 10 clicks. It took me a while to recover, but the soothing nature scene eventually coaxed my heart rate into the mid-50s—that is, until the sound of a propeller plane shot it up again, though not as high as the truck had. At this point, my cortisol was 8.2 nanomoles per liter—1.5 points over baseline—and the variations in my heart rate indicated similar patterns of stress.

My results were typical of Smyth’s findings, which support complementary psychological theories most of us would recognize as common sense. Namely, that pleasing natural sights and sounds are good for the heart and mind—our human cacophony, not so much. “Your recovery was clearly disrupted,” Smyth told me. “Those noises are violating your experience. It’s half as stressful as doing the speech task. Those aren’t trivial effects.”

Numerous studies have found that noise exposure has negative effects on children’s learning and cognitive performance.

It all adds up to a dagger twice thrust: Not only does background noise interfere with our much-needed ability to recuperate, but in the places where we live and play, we have increasingly fewer havens from the onslaught.

Even if you think you’re immune to city noise, it may well be affecting your health. The best research on this comes out of Europe. In one study of 4,861 adults, a 10-decibel increase in nighttime noise was linked to a 14 percent rise in a person’s likelihood of being diagnosed with hypertension. Health experts studying more than 1 million people in the vicinity of Germany’s Cologne Bonn Airport found that people subjected to background noise of greater than 40 decibels were at increased risk of cardiovascular diseases, kidney failure, and dementia compared with those who lived farther from the flight paths, where things were quieter. (For perspective, the legal nighttime noise limit in Washington, DC, is 55 decibels.)

Another study examined how the opening of a new airport in Munich affected nearby children. In the 18 months after flights commenced, the researchers observed soaring levels of stress hormones in their subjects. The children’s epinephrine levels rose 49 percent, their norepinephrine more than doubled, and their systolic blood pressure, on average, went up by five points.

Yet another depressing study examined the cognition of 2,800 students in 89 schools across Europe. Published in The Lancet in 2005, it found that aircraft and road noise had significant impacts on reading comprehension and certain kinds of memory. The results, adjusted for family income, the mother’s education, and other confounding factors, were linear. For every five-decibel noise increase, the reading scores of British children dropped by the equivalent of a two-month delay, so that kids in neighborhoods that were 20 decibels louder than average were almost a year behind.

This was no fluke: “To date, over 20 studies have shown a negative effect of environmental noise exposure on children’s learning outcomes and cognitive performance,” notes a 2013 paper in the Journal of Environmental Psychology. “Studies have demonstrated that children with chronic aircraft, road traffic or rail noise exposure at school have poorer reading ability, memory, and academic performance on national standardised tests.” There’s science behind the saying “You can’t hear yourself think.”

A healthy soundscape “is not a wishy-washy amenity. It’s a potential public health factor.”

You can probably guess which communities face the greatest sonic barrage: the same ones stuck with the worst air, the shoddiest housing, and so on. Noise as a social justice issue is just beginning to gain traction. But as diseases and cognitive problems are increasingly chalked up to chronic stress, it makes sense to look at all the contributing factors to that stress. Much of what we know about urban noise in the United States actually comes from National Park Service researchers, who have spent the last 14 years collecting 1.5 million hours of ambient sound from loca­tions ranging from remote wilderness areas to urban street corners. What they’re finding is that noise may well be the most pervasive pollutant in America.

Now researchers can estimate people’s noise exposure down to the level of individual city blocks, says Peter James, a researcher at the Harvard school of public health whose team is using Park Service data to explore whether excessive noise is partly responsible for disparities in “cardiovascular outcomes” in disadvantaged communities. People living in such neighborhoods are also the least likely to have access to the restorative benefits of nature, and the granular noise data could help city planners, policymakers, and activists plan accordingly. Groups like Outdoor Afro and NatureBridge—which aim to get urban kids out into natural settings—are already springing up in cities nationwide.

A healthy soundscape, James says, “is not a wishy-washy amenity. It’s a potential public health factor we need to understand to make sure everyone has the same opportunities.” Smyth offers this advice: “We should think about soundscapes as medicine,” he told me. “It’s like a pill. You can prescribe sounds or a walk in the park in much the way we prescribe exercise. Do it 20 minutes a day as a lifetime approach—or you can do it as an acute stress intervention. When you’re stressed, go to a quiet place.” I’m ready.