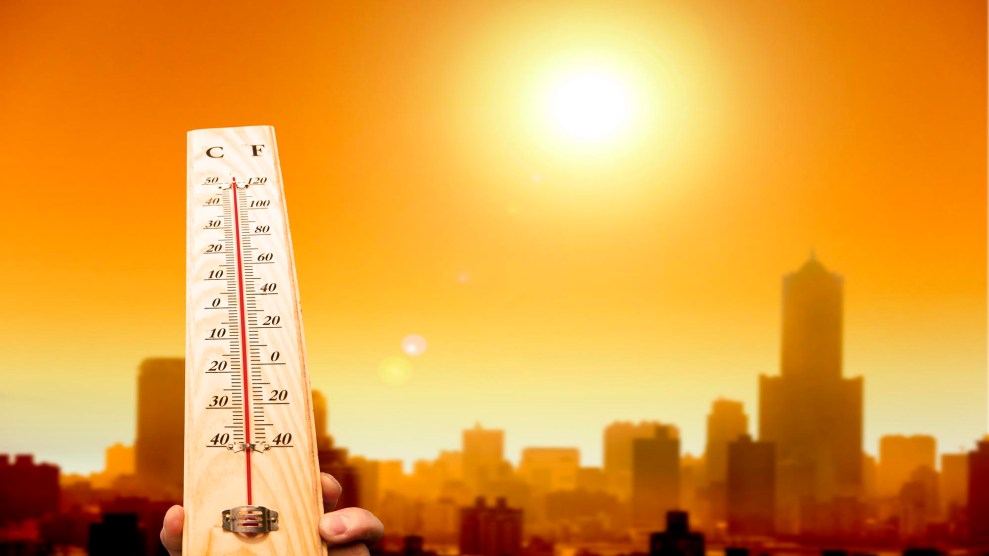 2016 was the hottest year on record, setting a new high for the third year in a row, with scientists firmly putting the blame on human activities that drive climate change.

The final data for 2016 was released on Wednesday by the three key agencies—the UK Met Office and NASA and the National Oceanic and Atmospheric Administration in the United States—and showed 16 of the 17 hottest years on record have been this century.

Direct temperature measurements stretch back to 1880, but scientific research indicates the world was last this warm about 115,000 years ago and that the planet has not experienced such high levels of carbon dioxide in the atmosphere for 4 million years.

In 2016, global warming delivered scorching temperatures around the world. The resulting extreme weather means the impacts of climate change on people are coming sooner and with more ferocity than expected, according to scientists.

The natural El Niño climate phenomenon, which helped ramp up temperatures to “shocking” levels in early 2016, has now waned, but carbon emissions were the major factor and will continue to drive rising heat. Scientists expect 2017 to be another extremely hot year.

The new data shows the Earth has now risen about 1.1 degrees Celsius (2 degrees Fahrenheit) above the levels seen before the industrial revolution, when large-scale fossil fuel burning began. This brings it perilously close to the 1.5 degrees C (2.7 degrees F) target included as an aim of the global climate agreement signed in Paris in December 2015. 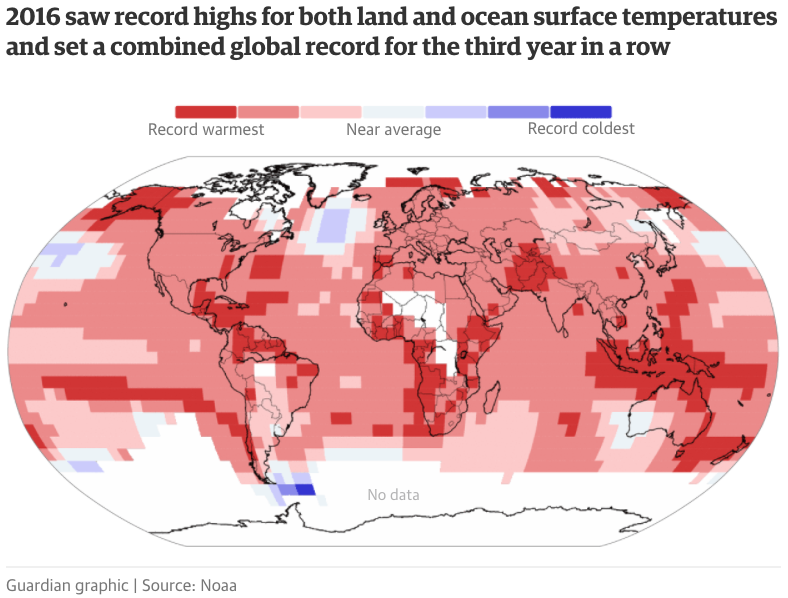 The declaration of 2016 as a year of record-breaking heat comes just ahead of the inauguration of Donald Trump as president. Trump has called global warming a hoax and is filling his administration with climate change deniers and former ExxonMobil boss Rex Tillerson. Tillerson said recently that climate change does exist but that the ability to predict the effects of greenhouse gas emissions is “very limited,” a statement most climate scientists would reject.

Michael Mann, a climate scientist at Penn State University, said: “The spate of record-warm years that we have seen in the 21st century can only be explained by human-caused climate change. The effect of human activity on our climate is no longer subtle. It’s plain as day, as are the impacts—in the form of record floods, droughts, superstorms and wildfires—that it is having on us and our planet.”

“While there may be some cost in mitigating climate change, there are already major costs in damages,” said Prof Kevin Trenberth, a scientist at the US National Center for Atmospheric Research, who estimates the costs as already tens of billions of dollars a year. “Yet if sensible approaches are implemented in the right way for [cutting emissions] and building resilience, the increases in energy efficiency can actually make it a net gain, not only for the planet for for everyone.”

Bob Ward, policy director at the Grantham Research Institute on Climate Change at the London School of Economics, said: “Any politician who denies this evidence from world-class climate scientists will be willfully turning a blind eye to rising risks that threaten the lives and livelihoods of their citizens.

“I hope that President-elect Trump and his team in particular will acknowledge and act on this important scientific information.”

Peter Stott, acting director of the Met Office’s Hadley Center, said: “A particularly strong El Niño event contributed about 0.2C to the annual average for 2016. However, the main contributor to warming over the last 150 years is human influence on climate from increasing greenhouse gases in the atmosphere.”

The head of the World Meteorological Organization (WMO), Petteri Taalas, said in November: “The extra heat from the powerful El Niño event has disappeared. The heat from global warming will continue. Because of climate change, the occurrence and impact of extreme events has risen. ‘Once in a generation’ heatwaves and flooding are becoming more regular.”

A WMO report said human-induced global warming had contributed to at least half the extreme weather events studied in recent years, with the risk of extreme heat increasing by 10 times in some cases.

The record-smashing temperatures in 2016 led to searing heat waves throughout the year: a new high of 42.7 degrees C (108.9 degrees F) was recorded in Pretoria, South Africa in January; Mae Hong Son in Thailand saw 44.6 degrees C (112.3 degrees F) on April 28; Phalodi in India reached 51.0 degrees C (123.8 degrees F) in May, and Mitribah in Kuwait recorded 54.0 degrees C (129.2 degrees F) in July. Warm oceans saw coral mortality of up to 50 percent in parts of Australia’s Great Barrier Reef and bleaching of 75 percent of Japan’s biggest reef.

The level of CO2 in the atmosphere also broke records in 2016, with May seeing the highest monthly value yet—407.7 parts per million—at Mauna Loa, in Hawaii, the site of the longest-running measurements dating back to 1958.

Global carbon emissions have barely grown in the last three years, after decades of strong growth, according to an analysis published in November. The main reason is China burning less coal, but CO2 is still being emitted into the atmosphere at record levels. “CO2 will continue to rise and cause the planet to warm until emissions are cut down to near zero,” said Prof Corinne Le Quéré at the University of East Anglia.