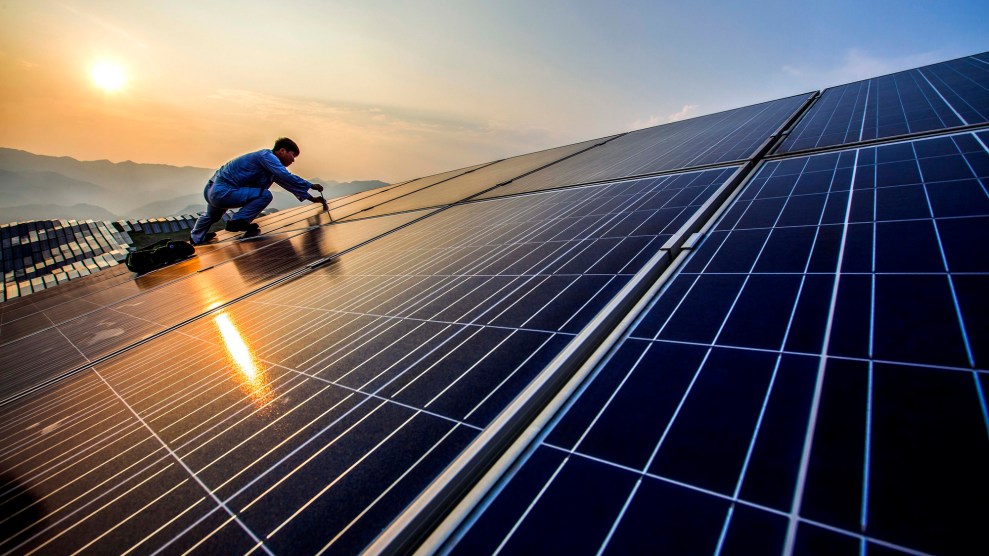 A Chinese maintenence worker inspects a solar panel in China's Fujian province. China is promising $361 billion in new renewable energy projects like this by 2020. Chinatopix via AP

President-elect Donald Trump has called climate change a hoax created by the Chinese. The Chinese disagree—and are pumping billions of dollars’ worth of investments into green energy over the next three years.

On Thursday, Reuters published details of the latest installment of China’s plans to break its deadly use of coal, an addiction that makes it the world’s worst greenhouse gas emitter.

The funds—$361 billion by 2020—are designed to create 13 million green jobs, according to the country’s National Energy Administration. New projects such as solar, wind, hydro, and nuclear power will form half of all new electricity generation by 2020 and will create the energy equivalent to 580 million metric tons of coal.*

The announcement matches China’s past pledges to kick its coal habit—the fuel that dominates its electricity production and creates heartburn for the country’s leaders, as the public’s angry reaction to foul air becomes a major political threat. Despite China’s so-called “war on pollution,” this week brought yet another toxic “airpolcalypse” to Beijing’s skies. Watch this incredible time-lapse video of the smog rolling into town:

China has been pulling out all stops to create a clean-tech revolution. Last year, a Chinese firm topped a reputable global ranking for wind energy production for the first time, beating America’s General Electric. China already leads the world in solar. (Go inside a massive Chinese solar factory with me, here.) China is also on track to peak and then begin to taper its greenhouse gas emissions around 2025—five years ahead of a promise made by its leader, Xi Jinping, in November 2014, as part of China’s historic deal with the United States. This year, China will launch the world’s biggest national carbon trading market.

But China is on the verge of losing its major global partner in these endeavors. Trump has promised to end America’s role in the Paris climate agreement and cancel contributions to UN climate programs. He has also tapped pro-fossil-fuel and anti-regulation types, including some unapologetic climate change deniers, for top positions in the new administration. For example, as Oklahoma attorney general, Scott Pruitt has repeatedly sued the Environmental Protection Agency—which Trump wants him to lead.

We can’t destroy the competitiveness of our factories in order to prepare for nonexistent global warming. China is thrilled with us!

There are also Trump’s new anti-China trade hawks, including outspoken China critic Peter Navarro, who advocates a much more adversarial approach, including a controversial 40-plus percent tariff on Chinese imports, potentially ratcheting up tension between the two global giants even before Inauguration Day on January 20.

China has issued unusually blunt warnings to Trump and US leaders if they abandon international efforts to combat climate change—while saying they’ll act alone if necessary. “If they resist this trend, I don’t think they’ll win the support of their people,” said China’s longtime climate negotiator Xie Zhenhua before the November election. “And their country’s economic and social progress will also be affected.”

Correction: An earlier version of this article omitted “million” from the measurement of coal.