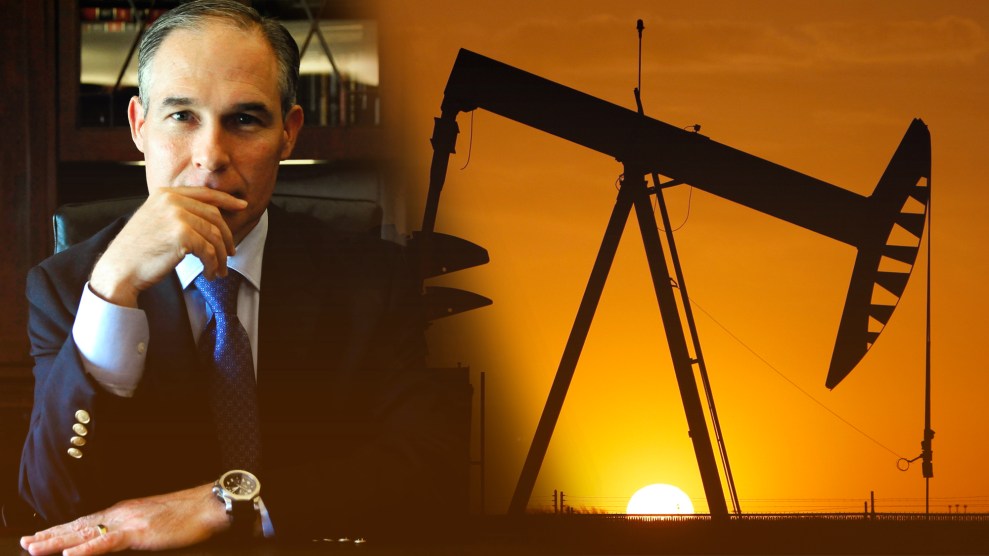 Scott Pruitt, Oklahoma’s attorney general and Donald Trump’s pick to lead the Environmental Protection Agency, has been a longtime opponent of federal environmental regulations and a denier of climate change. Not surprisingly, as Pruitt’s confirmation hearing approaches, many of his most prominent supporters are on the fringe of leading scientific consensus on climate change, and many are closely aligned with the fossil fuel industry that the EPA is responsible for regulating.

“As far as we can tell there’s literally nothing in his record showing any indication of protecting the environment in any way that matters,” David Goldston, the director of government affairs at the Natural Resources Defense Council, said on a call with reporters on Wednesday.

Democrats and environmentalists have accused Pruitt of being too extreme to lead an agency charged with protecting public health and the environment. They point to his work as Oklahoma’s attorney general: Since 2011 he has sued the EPA 13 times and has led the effort to overturn new water regulations and Obama’s signature climate policy.

Six Senate Democrats on the Environment and Public Works Committee have demanded more details from Pruitt on his connection to groups such as the Koch-funded Freedom Partners, which donated at least $175,000 to the nonprofit Rule of Law Defense Fund, the organization that Pruitt and other attorneys general used to coordinate lawsuits against the EPA under the Obama administration. The New York Times also found direct coordination between Pruitt’s office and the Oklahoma oil and gas company Devon Energy to weaken EPA oversight.

“We have seen in the last few weeks how the reins of the federal government are being handed over to the fossil fuel industry.”

“This is a frightening moment,” said Harvard University professor Naomi Oreskes, who’s written extensively on fossil fuel interests in politics, in December. “We have seen in the last few weeks how the reins of the federal government are being handed over to the fossil fuel industry.”

And now, a new dark-money group has popped up to further counterattacks. Politico acquired a flier from Protecting America Now, a new 501(c)(4) that solicits anonymous contributions anywhere from $25,000 to $500,000 to confront “anti-business, environmentalist extremists.” Their website is registered by an Oklahoma public affairs firm that counts oil and utility companies and Sen. Jim Inhofe among its clients. Pruitt’s other defenders include prominent climate deniers, a Koch-supported organization, and oil-funded groups and lobbyists.

Here are some of his most prominent advocates and what they are saying:

The Denier-in-Chief: Jim Inhofe is a four-term senator from Oklahoma, former chairman of the Senate Committee on Environment and Public Works, and the author of The Greatest Hoax: How the Global Warming Conspiracy Threatens Your Future.

The Legitimizer: Jeb Bush tapped Pruitt to help put together his 2015 campaign policy plan, “Putting Washington in Its Place.”

Marshalling the Defense: America Rising Squared is an arm of the Republican super-PAC, America Rising, which launched a campaign to target environmentalists earlier this year.

The Climate Deniers: This trifecta of conservative think tanks—the Heartland Institute, the Competitive Enterprise Institute, and FreedomWorks—are all famous for promoting climate change denial and have mobilized to support Pruitt.

Given this list of prominent supporters, environmental advocates fear that the fossil fuel industry has already come to dominate Pruitt and Trump’s environmental policy.

“From denying settled climate science to leading the opposition of EPA’s Clean Power Plan, Pruitt has sent a loud and clear message to Big Oil and its well-funded mouthpieces that he’s their guy,” said Sen. Sheldon Whitehouse of Rhode Island, who is one of the senators demanding Pruitt’s disclosure. “To put a climate denier at the helm of an agency working to keep our environment safe is as dangerous as it gets.”