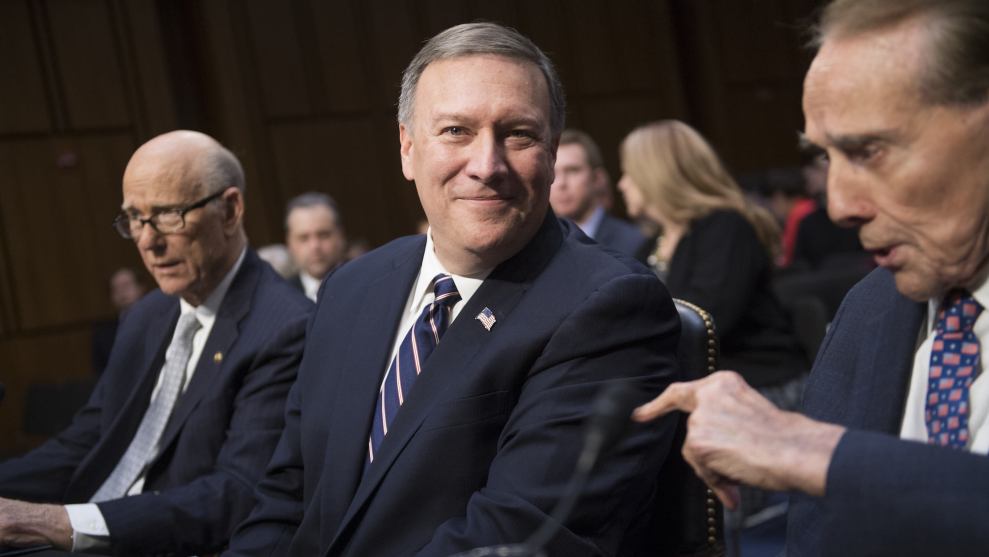 What does the CIA director have to do with climate change? A lot more than Mike Pompeo, Donald Trump’s pick for the agency’s top job, seems to appreciate.

During his Senate Intelligence Committee confirmation hearing Thursday, Sen. Kamala Harris (D-Calif.) examined the sitting Kansas congressman’s views on climate science. Quoting CIA Director John Brennan, who had a 25-year career at the agency, Harris noted that he cited climate change as one of the “deeper causes of rising instability.”

“Do you have any reason to doubt the assessment of these CIA analysts?” Harris asked.

“I haven’t had a chance to read those materials with respect to climate change,” Pompeo answered. “I do know the agency’s role there. Its role is to collect foreign intelligence, to understand threats to the world. That would certainly include threats from poor governance, regional instability, threats from all sources and to deliver that information to policymakers. To the extent that changes in climatic activity are part of that foreign intelligence collection task, we will deliver that information to you all and to the president.”

Harris pressed Pompeo on his past comments in which he questioned the scientific consensus on climate change.

He replied that most of his commentary “has been directed to ensuring that the policies that America puts in place actually achieve the objective of ensuring we don’t have catastrophic harm that result from a changing climate.” He then added that he didn’t see any reason why climate change should be his concern at the CIA.

“Frankly, as the director of CIA, I would prefer today not to get into the details of the climate debate and science,” he said. “My role is going to be so different and unique from that. It is going to be to work alongside warriors keeping Americans safe. And so, I stand by the things that I’ve said previously with respect to that issue.”

Since the George W. Bush administration, officials in intelligence and at the Pentagon have warned that climate change poses a real security threat. The Department of Defense has described climate change as a “threat multiplier” that exacerbates disease, hunger, and terrorism. The State Department under John Kerry readily acknowledged that “climate change is a threat to the security of the United States” and countries around the globe.

Pompeo promised Harris he’d take a closer look at NASA’s climate research but couldn’t comment on Thursday. “I haven’t spent enough time to look at NASA’s findings in particular. I can’t give you any judgment on that today,” he said.

But Pompeo has vowed to take a closer look at the science for at least five years. Asked by CSPAN in 2013 whether he believed global warming was a problem, Pompeo, who was then serving his second term in Congress, was equivocal, repeating the debunked claims that there’s a pause in global warming and that the climate is cooling:

At another hearing on Wednesday, Trump’s pick for secretary of state, former CEO of Exxon Mobil Rex Tillerson, admitted, “I don’t see [climate change] as an imminent national security threat, but perhaps others do.” Tillerson, like Pompeo, might want to check in with the department he could soon lead.

For Harris’ part, the freshman senator is not sold on the next CIA director unless he is “willing to accept the overwhelming weight of evidence when presented, even if it turns out to be politically inconvenient or require you to change a previously held position.” Pompeo pledged he would look again at the facts, just as he’s been promising for years.