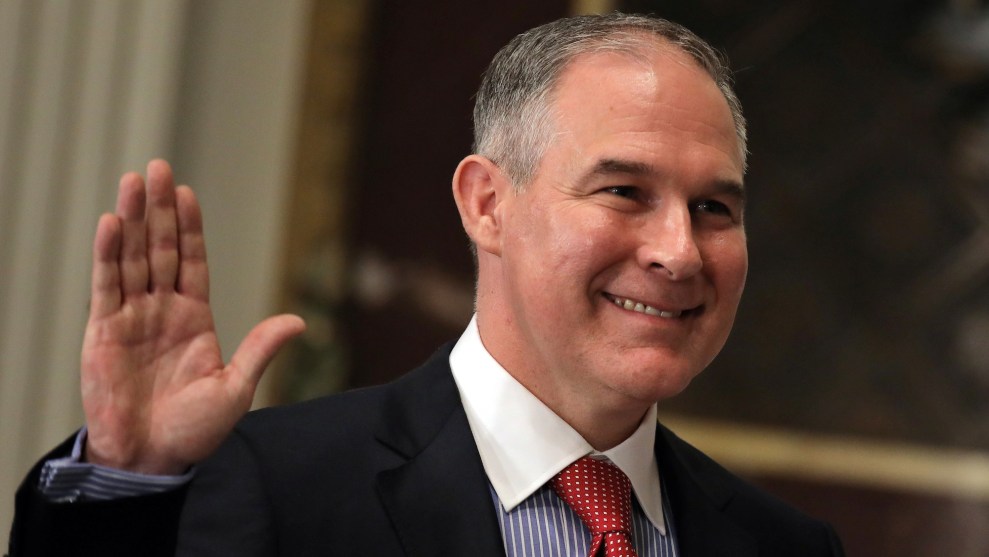 Scott Pruitt was sworn in Friday as EPA administrator.Carlos Barria/Reuters via ZUMA

Scott Pruitt may have wanted to ease Environmental Protection Agency staffers’ concerns about him Tuesday, but his first remarks as head of the agency hardly mentioned environmental protection at all.

With Donald Trump’s EPA transition staff sitting nearby, Pruitt delivered an 11-minute speech, in which he declared, “We as an agency and we as a nation can be both pro-energy and jobs and pro-environment.” He also quoted famed conservationist John Muir: “Everyone needs beauty as well as bread, places to pray in and play in.” Pruitt did lament the “toxic environment” in the country, but it was a reference to the political climate—part of a call for a more civil discourse.

The former Oklahoma attorney general never dwelled on the specifics of his or the White House’s agenda for the EPA in the short address, which featured introductory remarks by recent acting administrator Catherine McCabe. Neither McCabe nor Pruitt mentioned the elephant in the room: the EPA’s regulations on climate change and Pruitt’s role in suing the agency for its climate work.

“Pruitt’s talk [was] as bad as expected. Not one word about public health…It was condescending and hypocritical.”

“I know it’s very difficult to capture in one speech the vision and direction of an agency,” Pruitt said, while outlining a few of his core guiding principles for the new EPA. He said he wants to limit the scope of the agency’s regulatory work and ensure stability for industry. “Regulations ought to make things regular,” Pruitt said. “Regulators exist to give certainty to those they regulate…Process matters and we should respect that and focus on that, and try to avoid, do avoid, abuses that occur sometimes.”

Pruitt mentioned the need to follow “rule of law” and respect states’ roles in enforcing environmental standards. “Congress has provided a very robust, important role of the states,” Pruitt said. (Environmentalists, of course, are quick to point out that states are not always eager or financially equipped to protect air, water, or the climate on their own.)

If Pruitt’s address was meant to soothe staffers’ concerns about their incoming administrator, they may have come up short.

“Pruitt’s talk [was] as bad as expected,” said a current career EPA staffer of over 20 years, who requested anonymity, following the speech. “Not one word about public health. And talking about the rule of law as if we didn’t do EVERYTHING with the realization that it WILL end up in court. It was condescending and hypocritical.”

Some former EPA officials shared that view. “Trump’s team spent the entire campaign and the last few months railing against EPA’s existence, its staff, and its purpose,” Liz Purchia, an Obama-era communications staffer at the agency, said in an email. “Accomplishing agency priorities was no easy task when the administrator had staff’s back and politicals and careers agreed the majority of the time, so let’s see how well Trump’s EPA does getting staff to follow them when they feel disrespected. These are professionals with years of experience, who have been made to feel like their leader doesn’t trust their judgment. The American people are relying on them to defend the agency, protect its environmental statutes and stand up to Trump’s team to ensure they uphold science and the law.”

“These are professionals with years of experience, who have been made to feel like their leader doesn’t trust their judgment.”

Going by the EPA’s press releases over the weekend, the agency now views industry and conservatives as its real constituency. No public health groups, environmentalists, or scientists appeared on the laundry list of “stakeholder” congratulations circulated by the EPA after Pruitt was sworn in.

Outside the EPA on Tuesday, an administration official echoed Pruitt’s pledge that he will listen to career staff. “He’s a very good listener,” Don Benton, a White House senior adviser, told reporters after the address. “I don’t expect him to be making any quick decisions.”

Benton didn’t answer specifics on the timing of the presidential actions, saying that the matter is between Pruitt and Trump. But a slow transition based on input from current EPA staff isn’t what news reports—nor Pruitt’s own words—have suggested. Various news outlets have reported that the White House intends to roll out a series of presidential actions targeting the EPA as early as this week.

Pruitt didn’t provide much clarity Tuesday on what comes first. But in an interview with a conservative Wall Street Journal columnist last week, Pruitt appeared to reverse himself on one key issue. At his confirmation hearing in January, he said that the EPA’s official finding that climate change poses a health danger and is therefore subject to the Clean Air Act “needs to be enforced and respected.” But according to the Journal, Pruitt now wants to conduct a “very careful review” of whether the agency can do anything at all about global warming. His remarks Tuesday appear to have done little to persuade his critics that such a review would be based on sound science.