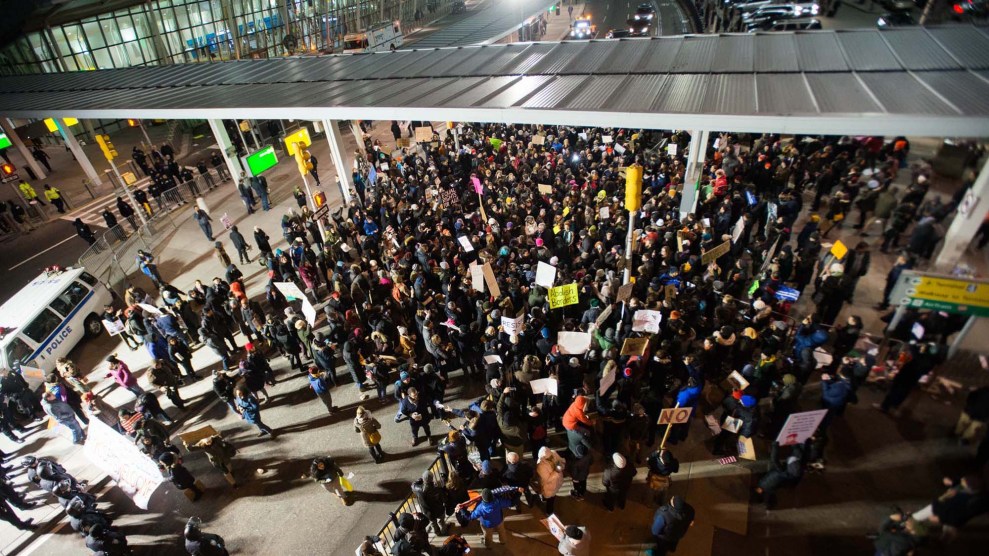 Samira Samimi knew she wanted to be a scientist the first time she saw a glacier. “This is what I want to do,” she remembers thinking on her trip to the mountains. “This is who I want to be.”

She was 16 years old, growing up in Iran, where glaciers are less than plentiful. She knew she would have to leave her home country to study them, so she applied to Canadian universities with an eye on the Arctic. Now 30, she’s in her first year of a glaciology PhD at the University of Calgary, and—dream come true—part of a NASA-funded team studying the Greenland ice sheet.

But on Friday, the Trump administration’s ban on travelers from seven predominantly Muslim countries threw her planned research trip to Greenland this spring into jeopardy. Her cargo plane flight takes off in April from a US Air National Guard base in Albany.

“Think of the STEM fields as the engine of the American economy. That engine has gotten so big and so powerful that it can’t be fueled by talent within the US itself.”

In the days since President Trump signed the executive order, it has already disrupted science communities in the United States and around the globe. Students and researchers have found themselves trapped out of the country, seen field work plans scuttled, or had long-awaited visits canceled. For many scientists engaged in the work of understanding and addressing the world’s next great challenge—a changing climate and the transition to cleaner energy sources—it’s clear that you can’t stifle immigration without stifling innovation, too.

“We live in an extremely competitive global environment,” says Andrew Rosenberg, director of the Center for Science and Democracy at the Union of Concerned Scientists. “Just because we want to do this ‘America First’ thing doesn’t mean the rest of the world is going to stop being entrepreneurial and get out of the way.”

Told one way, the story of America the superpower is the story of innovation. Our history books and homegrown myths are crowded with inventors and entrepreneurs, from Thomas Edison to Steve Jobs. In the 20th century, America earned its place in world events, more often than not, by MacGyvering one unlikely technological triumph after another: over disease, over German nuclear physicists and Cold War cosmonauts, over the pull of Earth’s gravity itself. And immigration played a critical role in that progress.

As The Hill pointed out last year, all six American Nobel laureates in 2016 were foreign-born. That’s not unusual: According to a 2014 study by Stanford scientists, the number of US patent filings increased by 30 percent in the wake of Jewish immigrants fleeing Nazi Germany. So did the number of Nobel prizes.

In general, the less open a society is, the more likely its scientists and innovators are to go elsewhere—and for a long time, that “elsewhere” has been the United States.

One in six US scientists is an immigrant, according to a 2013 National Science Foundation report. Of those, a majority are naturalized citizens, but many hold green cards or long-term visas to study and work in the United States. And those 5 million scientists have had a measurable effect on science in their adopted country.

“We’re at a point where changes in our technology are happening so quickly, we can either sit it out, or we can be full participants,” Rosenberg says. “We have some natural competitive advantages, but we could lose them simply by taking this nationalist line.”

“Think of the STEM fields as the engine of the American economy,” says Moh El-Naggar, a biophysicist at the University of Southern California, where he studies the weird things microbes can do—including, potentially, playing a role in renewable energy technologies. “That engine has gotten so big and so powerful that it can’t be fueled by talent within the US itself.”

El-Naggar was born in Libya, one of the seven countries placed under travel restrictions by Trump’s executive order. He’s now an American citizen and worries about the toll of a travel ban on the morale of his fellow foreign-born scientists—and the impact on their research.

“A lot of people like me ended up in this country, doing what we love, because it was a better place to come to than where we grew up. So when I say that this looks bad to me right now, I hope that carries extra weight.”

Last week’s news came with a personal cost, too. His parents had been planning a trip to California in April to meet their grandchildren for the first time. Now those plans are on hold, indefinitely.

“A lot of people like me ended up in this country, doing what we love, because it was a better place to come to than where we grew up,” El-Naggar says. “So when I say that this looks bad to me right now, I hope that carries extra weight. This is coming from someone who has seen bad.”

US scientific organizations have put out strong statements condemning the entry ban, including a letter sent by the AAAS and co-signed by more than 150 other institutions. Massachusetts Institute of Technology President L. Rafael Reif called the policy “a stunning violation of our deepest American values” in an email to students, while John Holdren, science advisor to the Obama administration, had even stronger words for the executive action, calling it “perverse,” an “abomination,” and a “terrible, terrible idea” in an interview with Nature.

An online petition to lift the restrictions has already been signed by tens of thousands of academics and researchers. Many tech companies—often sponsors of visas for foreign-born engineers, if not founded and led by immigrants themselves—have spoken out against the move, as well.

Their concern is amplified by additional anti-science moves by the Trump administration. In orders leaked last week, the Environmental Protection Agency was ordered to cease all external communication, including scientific releases, until they could be reviewed and approved by a member of the administration.

“You should never get to the point where someone in political power gets to decide what’s the good science and what’s the bad science,” the UCS’s Rosenberg says. “You have to worry about that.”

For Samimi, there’s very specific climate research at stake. She made a trip to Greenland last year, installing instruments in the ice sheet that need to be maintained and adjusted. If she can’t get back, she might have to abandon her PhD experiment.

“If I’m not able to work there …” she says. “I don’t even want to think about alternatives. This doesn’t make sense, you know?” Right now, a lot of the scientific community is reaching the same conclusion.