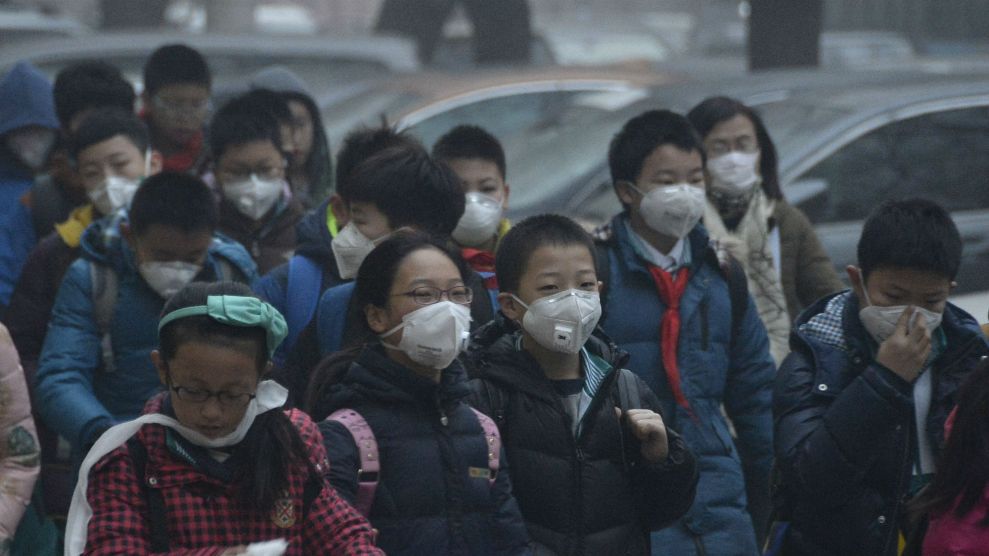 It was known as the Great Pea Soup. In 1952, a thick, greenish-yellow fog smothered London, halting traffic and daily life. At the time, when households burned cheap coal for heat, factories spewed unregulated smoke, and buses burned diesel fuel, Londoners were used to a certain degree of greasy haze. But the Great Smog or Big Smoke, as this 1952 pea-souper was also known, was unprecedented. Bitterly cold air “soaked up the pollution and held it like a blanket over the city” for four days straight, according to the Daily Mail. Twelve thousand people died.

We now know that short-term and long-term exposure to air pollution can kill people, particularly those with pre-existing conditions.

Sixty-five years later, our scientific understanding of air pollution has advanced immeasurably. We now know—because of events like the Great Pea Soup, but also a groundbreaking 1993 Harvard University study of smog-ridden U.S. cities and countless research papers since then—that short-term and long-term exposure to air pollution can kill people, particularly those with pre-existing conditions. “The evidence is so large,” said C. Arden Pope, a professor at Brigham Young University world-renowned researcher of air pollution’s impacts on human health. “There are very few people conducting this research and publishing it in the peer-reviewed literature who don’t think fine particles pollution can lead to death.”

There are, indeed, very few people who believe air pollution—specifically “fine particulate” pollution, or PM2.5—doesn’t cause death. Those who do, however, are getting louder and gaining influence in conservative political circles and inside President Donald Trump’s administration. These air-pollution deniers have just one hope: the repeal of clean-air regulations that have long protected Americans’ health.

At last month’s Conservative Political Action Conference (CPAC), during a little-noticed panel on climate change and environmental regulation, air pollution denial was rampant and went unchallenged. Steve Milloy, formerly a paid flack for the tobacco and fossil fuel industries and member of Trump’s Environmental Protection Agency transition team, argued that excessive air pollution is not linked to premature death. “My particular interest is air pollution,” Milloy said, alleging that EPA’s scientists are inherently biased. “These people validate and rubber-stamp the EPA’s conclusion that air pollution kills people.” Milloy also said, baselessly, that EPA scientists are “paying for the science it wants,” and that Trump must change the research process at the agency.

It is extensively proven, and widely accepted, that air pollution can harm humans, which is why the government regulates it. PM2.5 refers to tiny particles that are 2.5 micrometers or less in diameter—small enough to penetrate deep into the circulatory system and potentially infiltrate the central nervous system. The particles range in composition, originating anywhere from cement dust to tobacco smoke to pollen. They are currently regulated under the Clean Air Act, a widely popular law passed in 1963 that has seen major amendments receiving unanimous or overwhelming support in the Senate. The CAA currently requires Congress to set what’s known as National Ambient Air Quality Standards for particulate matter.

“These people validate and rubber-stamp the EPA’s conclusion that air pollution kills people.”

Even Breitbart, the alt-right media organization with close ties to Trump, seems to accept that air pollution is bad for human health. It has published dozens of articles over the years—many from wire services, but some from its own contributors—that report, without opinion, about studies on the issue. “The chronic problem of pollution in China has been linked to hundreds of thousands of premature deaths,” Thomas D. Williams, Breitbart‘s Rome bureau chief, wrote in 2015. “The fine particles are believed to play a role in cardiovascular disease, lung problems, cancer, and emphysema.” Earlier this month, Breitbart senior editor-at-large Joel B. Pollack reported, “Air quality in some East Asian capitals is famously poor, with residents of Beijing taking extreme measures to avoid the health risks associated with heavy pollution.”

But Breitbart has also provided a platform for those leading the charge for air pollution denial. Last year, it published a column by Milloy titled, “How stupid is air pollution ‘science’?” And earlier this month, Breitbart columnist James Delingpole—who usually sticks to columns attacking climate science—joined the fray. In an article declaring that “The EPA’s Air Pollution Scare Is Just Another Fake News Myth,” Delingpole took issue with the most recent State of Global Air report, which found that air pollution contributed to 4.2 million deaths in 2015, because the study was partly funded by the EPA—while conveniently ignoring that it was also funded by 23 car companies and Exxon Mobil. Delingpole cited Milloy exclusively and extensively, linking to Milloy’s “fact sheet” on air pollution.

“Frankly, it’s full of stuff and nonsense,” said Janice Nolen, the assistant vice president of national policy at the American Lung Association, referring to Milloy’s fact sheet. “Particle pollution is one of the most researched topics in the scientific world, and has been reviewed extensively.”

There are pages of false claims in Milloy’s sheet, but a few are particularly egregious. He argues that two renowned air pollution studies that established the basic connection between PM2.5 and death—the aforementioned Harvard study and one by Pope, the BYU professor—have controversial methodologies that cannot be resolved because scientists refuse to make the raw data available. “For results to be considered to be scientifically credible, they must be capable of being independently replicated,” Milloy writes. This claim is the basis of a Republican-led bill currently being pushed through the House of Representatives.

“Particle pollution is one of the most researched topics in the scientific world, and has been reviewed extensively.”

There are several problems with this line of argument. The raw data Milloy seeks is private medical information on human subjects who were assured confidentiality when they participated in these studies. “There’s this issue if this data becomes public, will anyone be able to go and knock on these people’s doors?” said Marianthi-Anna Kioumourtzoglou, an environmental health professor at Columbia University. Long-term health data is also difficult to reproduce because the people who participated in the study have grown up; many likely have died. This is why, scientists say, many public health studies simply can’t be replicated. (The Harvard study, however, was successfully replicated in 2001 by the Health Effects Institute, which is funded by EPA, the motor vehicle industry, and the oil and gas industry. A similar reanalysis was published in 2005.)

Milloy and Delingpole also claim that “not one single” epidemiological or toxicological study has ever shown that particulate pollution directly caused a death, either in the short term or due to prolonged exposure. Kioumourtzoglou says this is a fundamental misunderstanding of how scientists classify cause of death. When people die, they are given an International Classification of Diseases (ICD) code to signify what happened, and there is no ICD code for pollution. “If you died of a heart attack, you get the ICD code for a heart attack,” she said. “If exposure to PM2.5 has caused a heart attack, on your death certificate, it would still say heart attack, not PM2.5.”

Pope, whose study was one of the first to establish the connection between short-term exposure to fine particulate matter and death, also said Milloy’s claim misunderstands the type of person who dies from exposure. A perfectly healthy person is not going to croak from a short jog through haze. But people who are already unhealthy—who have asthma, or cardiovascular or heart disease—should be worried. “We often refer to it as triggering,” Pope said. “Particulates will trigger these acute events, such as heart attack.”

This is not to say that the research on this subject is flawless. Kioumourtzoglou, unlike Milloy, has lead and published studies on problems with the scientific methods surrounding the impact of particulate matter pollution on human health. Scientists cannot strap pollution monitors onto humans and follow them around for years at a time, so sometimes they rely on models that predict air pollution concentrations at certain locations and times. “We have to rely on less than perfect measurements,” she said. “And these are known to induce error.”

The error, however, is exactly the opposite of what Milloy claims. Kioumourtzoglou’s research has found that current air pollution measuring methods tend to understate the effects of air pollution. “In reality,” she said, “the effects are even worse than documented.”

The good news is, Milloy and Delingpole remain outliers in a sea of evidence. As ThinkProgress pointed out last month, “The Centers for Disease Control, the World Health Organization (WHO), the National Institutes of Health, the American Lung Association, and the United Nations all link air pollution to increased risk of asthma, heart disease, and stroke. In 2013, the WHO even concluded that air pollution could be categorized as a human carcinogen.” Even Breitbart, as indicated above, has published uncritical articles about these organizations’ findings.

The bad news is, we already know that outliers can have disproportionate impact on policy.

The bad news is, we already know that outliers can have disproportionate impact on policy. Just look at the debate surrounding climate change. Despite near-consensus in the scientific community, one third of Congress are climate change deniers, as are Trump and his new EPA administrator, Scott Pruitt. What’s more, they’re using their fact-free ideology to dismantle policies that slow climate change. Trump is expected to issue an executive order this week undoing the Clean Power Plan, which regulates carbon emissions from fossil fuel plants. He is also considering withdrawing from the Paris Climate Agreement, the landmark international accord to stop global warming.

Milloy and Delingpole surely would like air-pollution deniers to have a similar impact on national policy. Given Milloy’s closeness to Trump’s inner circle, and Breitbart‘s growing influence on the White House, and it doesn’t seem so far-fetched. But even if that doesn’t come to pass, these deniers have already succeeded in shaping—or rather, creating—a debate that no politician or scientist should rightly entertain. And that debate is now a public reality. Milloy’s “fact sheet,” for instance, is the first result in a Google search of “PM 2.5 science.” A legitimate scientific article is second. 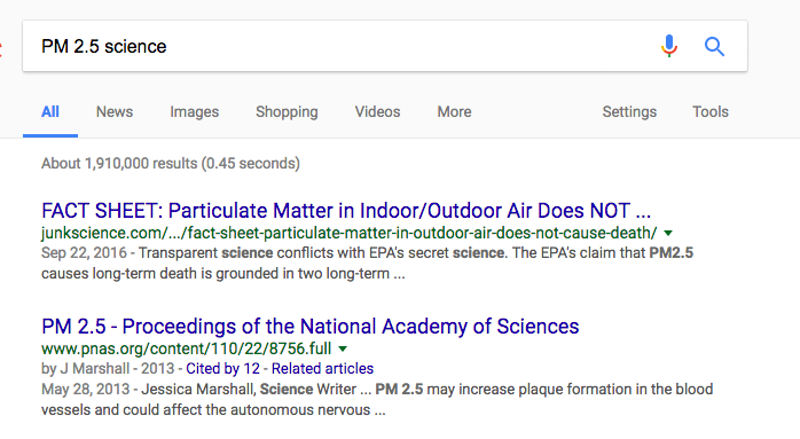