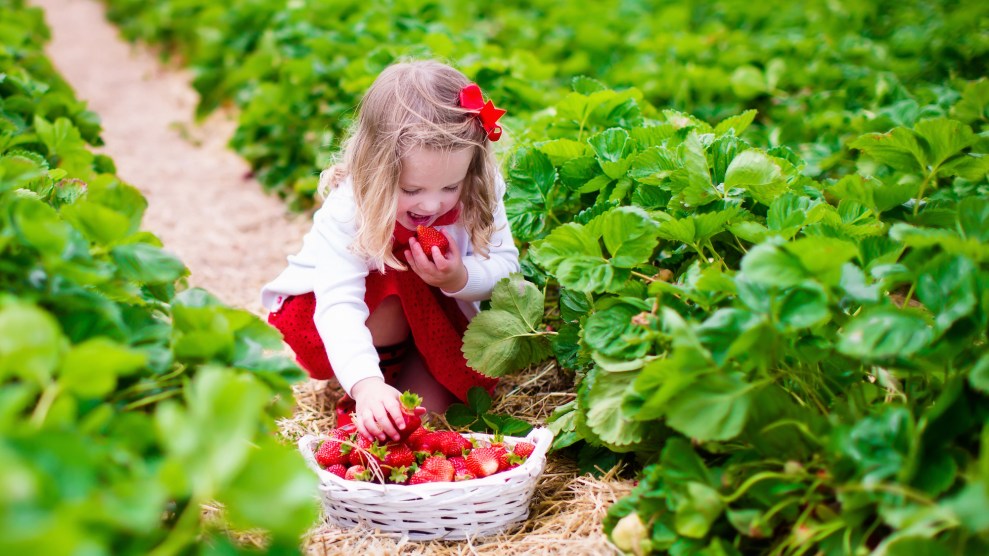 UPDATE (3-29-2017): EPA director Scott Pruitt signed an order denying the agency’s own proposal to ban chlorpyrifos, according to a Wednesday afternoon press release. “We need to provide regulatory certainty to the thousands of American farms that rely on chlorpyrifos, while still protecting human health and the environment,” Pruitt said in a written statement. “By reversing the previous Administration’s steps to ban one of the most widely used pesticides in the world, we are returning to using sound science in decision-making – rather than predetermined results.”

By Friday, President Donald Trump’s Environmental Protection Agency will have to make a momentous decision: whether to protect kids from a widely used pesticide that’s known to harm their brains—or protect the interests of the chemical’s maker, Dow AgroSciences.

The pesticide in question, chlorpyrifos, is a nasty piece of work. It’s an organophosphate, a class of bug killers that work by “interrupting the electrochemical processes that nerves use to communicate with muscles and other nerves,” as the Pesticide Encyclopedia puts it. Chlorpyrifos is also an endocrine disrupter, meaning it can cause “adverse developmental, reproductive, neurological, and immune effects,” according to the National Institutes of Health.

Major studies from the Mount Sinai School of Medicine, the University of California-Davis, and Columbia University have found strong evidence that low doses of chlorpyrifos inhibits kids’ brain development, including when exposure occurs in the womb, with effects ranging from lower IQ to higher rates of autism. Several studies—examples here, here, and here—have found it in the urine of kids who live near treated fields. In 2000, the EPA banned most home uses of the chemical, citing risks to children.

Stephanie Engel, an epidemiologist at the University of North Carolina and a co-author of the Mount Sinai paper, says the evidence that chlorpyrifos exposure causes harm is “compelling”—and is “much stronger” even than the case against BPA (bisphenol A), the controversial plastic additive. She says babies and fetuses are particularly susceptible to damage from chlorpyrifos because they metabolize toxic chemicals more slowly than adults do. And “many adults” are susceptible, too, because they lack a gene that allows for metabolizing the chemical efficiently, Engel adds.

But even after banning chlorpyrifos from the home, the EPA allowed farms to continue spraying it. While US farmers eased up on it in recent years, they’re still using quite a bit, mainly on corn and soybeans in the Midwest and on fruit, vegetable, and orchard crops in Washington, California, and the Southeast. About a fifth of all the chlorpyrifos applied on US farms happens in California. There, the main target crops are alfalfa, almonds, pistachios, walnuts, tomatoes, and strawberries.

In October 2015, after a review spanning more than a decade, the EPA concluded that exposure to chlorpyrifos posed an unacceptable risk to human health, both from residues on food and in drinking water, and proposed a new rule that would effectively ban farm use of it. The agency also expressed concern about “workers who mix, load and apply chlorpyrifos to agricultural and other non-residential sites and workers re-entering treated areas after application.”

The EPA then dragged its feet on finalizing the rule; but in August 2016, a US Federal Appeals court demanded that a decision be made by March 31, 2017, chastising the agency for its “continued failure to respond to the pressing health concerns presented by chlorpyrifos.”

A few months after that order, of course, Trump won the presidency, and so his EPA team will make the final decision on chlorpyrifos. Uh-oh. Trump often trumpets his own hostility to regulation and has backed it up by proposing a 31 percent cut in the EPA’s budget. Before taking office, Trump looked to Myron Ebell of the hyper-libertarian Competitive Enterprise Institute to lead the EPA’s transition. Ebell focuses mainly on denying climate change and promoting fossil fuels, but as I noted in November, CEI runs a website, SafeChemicalPolicy.org, that exists to downplay the health and ecological impacts of pesticides.

Trump’s pick to lead the EPA, former Oklahoma Attorney General Scott Pruitt, is a non-scientist with little track record in assessing the health risks posed by chemicals. But he does hew to Trump’s general hostility to regulation. At his confirmation hearings, Pruitt couldn’t name a single EPA regulation he supports, and he even declined to say whether he’d finalize the EPA’s proposed ban on asbestos.

It would be highly unusual for the EPA to backtrack on a decision to ban a chemical after so strongly signaling that it would—but “all bets are off with this administration,” said one pesticide policy expert.

Meanwhile, Dow and the pesticide industry trade group CropLife America are pushing the EPA to backtrack on the chlorpyrifos ban. “The court ordered EPA to make a final decision on the petition by March 31, 2017, but did not specify what that decision should be,” Dow noted in a November 10 press release urging the agency to maintain the status quo.

Dow AgroSciences’ parent company, Dow Chemical, has also been buttering up Trump. The company contributed $1 million to the president’s inaugural committee, the Center for Public Integrity notes. In December, Dow Chemical Chairman and CEO Andrew Liveris attended a post-election Trump rally in the company’s home state of Michigan, and used the occasion to announce plans to create 100 new jobs and bring back another 100 more from foreign subsidiaries. Around the same time, Trump named Liveris chair of the American Manufacturing Council, declaring the chemical exec would “find ways to bring industry back to America.” (Dow has another reason beside chlorpyrifos’ fate to get chummy with Trump: its pending mega-merger with erstwhile rival DuPont, which still has to clear Trump’s Department of Justice.)

Kristin Schafer, policy director for the Pesticide Action Network, says it would be highly unusual for the EPA to backtrack on a decision to ban a chemical after so strongly signaling that it would. (PAN is one of the advocacy groups that sued the EPA way back in 2007 over its previous lack of action on chlorpyrifos.) But she added that “all bets are off with this administration.”

She pointed out that the EPA and Dow have been battling over the chemical since the Clinton administration. Back in 1995, the agency fined the company $732,000 for failing to disclose more than 100 reports of chlorpyrifos poisoning. “These reports are particularly important,” the agency complained, because chemicals enter the marketplace without any human testing, and poisoning notices “may document effects not seen in animal studies, or indicate areas which warrant further research.” Most of those alleged poisoning incidences involved exposure in the home—chlorpyrifos was then the most-used household and yard insect-killer. By 2000, as noted above, the EPA had seen fit to ban most home uses of the insect killer.

In an analysis of the risks posed by chlorpyrifos released in November 2016, the EPA crunched data on residues found in food and compared them to the levels at which the chemical can harm the most vulnerable populations: kids and women of child-bearing age. The results (found on page 23 of the EPA doc) are startling. Natural Resources Defense Council researchers turned them into this handy graphic: 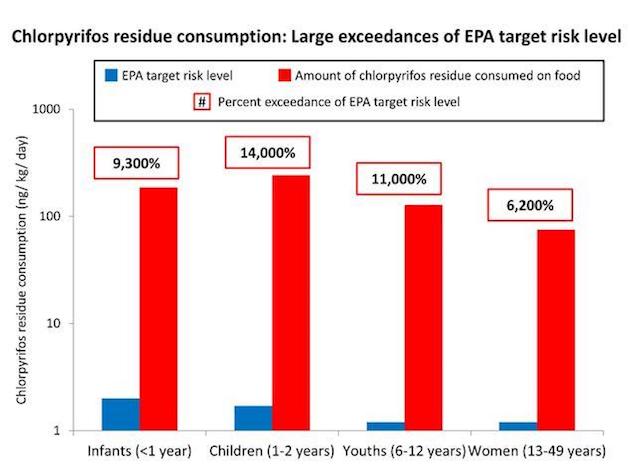 It would be quite something for the Trump administration to dismiss such overwhelming evidence from EPA scientists and continue allowing chlorpyrifos to be sprayed on crops with few restrictions. But he has already displayed a willingness to trash the agency’s rule-making process to placate his Big Ag supporters.