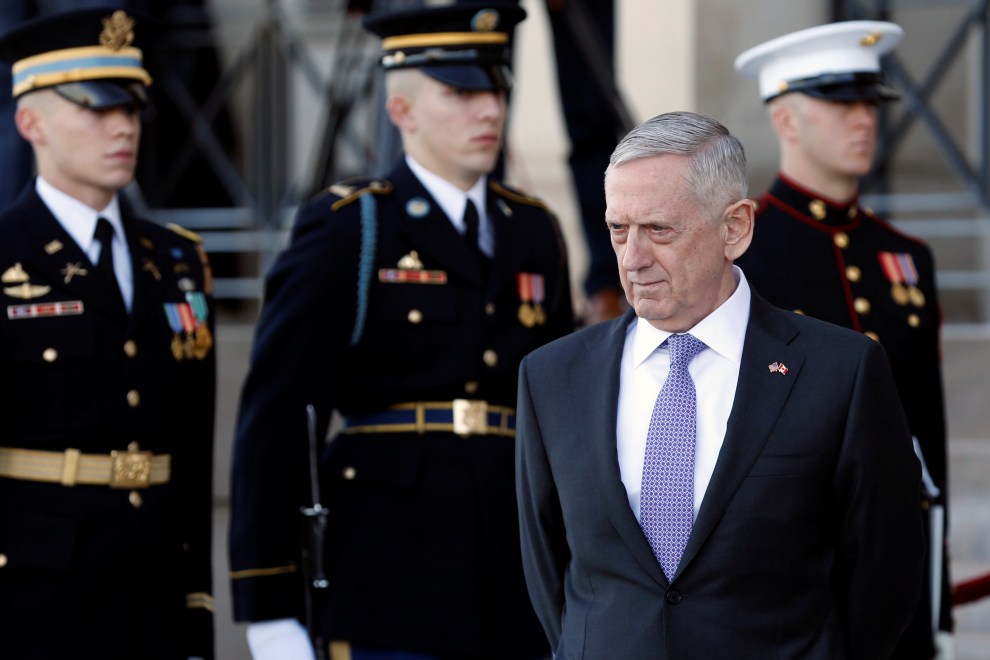 Secretary of Defense James Mattis has asserted that climate change is real and a threat to American interests abroad and the Pentagon’s assets everywhere, a position that appears at odds with the views of the president who appointed him and many in the administration in which he serves.

In unpublished written testimony provided to the Senate Armed Services Committee after his confirmation hearing in January, Mattis said it was incumbent on the US military to consider how changes like open-water routes in the thawing Arctic and drought in global trouble spots can pose challenges for troops and defense planners. He also stressed this is a real-time issue, not some distant what-if.

“Climate change is impacting stability in areas of the world where our troops are operating today,” Mattis said in written answers to questions posed after the public hearing by Democratic members of the committee. “It is appropriate for the Combatant Commands to incorporate drivers of instability that impact the security environment in their areas into their planning.”

Mattis has long espoused the position that the armed forces, for a host of reasons, need to cut dependence on fossil fuels and explore renewable energy where it makes sense. He had also, as commander of the US Joint Forces Command in 2010, signed off on the Joint Operating Environment, which lists climate change as one of the security threats the military expected to confront over the next 25 years.

But Mattis’ written statements to the Senate committee are the first direct signal of his determination to recognize climate change as a member of the Trump administration charged with leading the country’s armed forces.

These remarks and others in the replies to senators could be a fresh indication of divisions or uncertainty within President Donald Trump’s administration over how to balance the president’s desire to keep campaign pledges to kill Obama-era climate policies with the need to engage constructively with allies for whom climate has become a vital security issue.

Security questions related to rising seas and changing weather patterns in global trouble spots  are one reason that global warming has become a focus in international diplomatic forums.

Mattis’ position also would appear to clash with some Trump administration budget plans, which, according to documents leaked recently to The Washington Post, include big cuts for the Commerce Department’s oceanic and atmospheric research 2014 much of it focused on tracking and understanding climate change.

Even setting aside warming driven by accumulating carbon dioxide, it’s clear to a host of experts, including Dr. Will Happer, a Princeton physicist interviewed by Trump in January as a potential science adviser, that better monitoring and analysis of extreme conditions like drought is vital.

Mattis’ statements could hearten world leaders who have urged the Trump administration to remain engaged on addressing global warming. German Chancellor Angela Merkel is scheduled to meet Trump on Friday.

Security questions related to rising seas and changing weather patterns in global trouble spots like the Middle East and sub-Saharan Africa are one reason that global warming has become a focus in international diplomatic forums. On March 10, the United Nations Security Council was warned of imminent risk of famine in Yemen, Somalia and South Sudan.

As well, at a Munich meeting on international security issues last month, attended by Mattis and Vice President Mike Pence, European officials pushed back on demands that they spend more on defense, saying their investments in boosting resilience to climate hazards in poor regions of the world are as valuable to maintaining security as strong military forces.

In September, acting on the basis of a National Intelligence Council report he commissioned, President Obama ordered more than a dozen federal agencies and offices, including the Defense Department, “to ensure that climate change-related impacts are fully considered in the development of national security doctrine, policies, and plans.”

There’s no sign that any of this has been done.

Whether the inaction is a function of the widespread gaps in political appointments at relevant agencies, institutional inertia or a policy directive from the Trump White House remains unclear.

“We refer you to the NSC for any additional information on the climate working group.”

Mattis’ statements were submitted through a common practice at confirmation hearings in which senators pose “questions for the record” seeking more detail on a nominee’s stance on some issue.

The questions and answers spanned an array of issues, but five Democratic senators on the committee asked about climate change, according to a government official briefed in detail on the resulting 58-page document with the answers. The senators were Jack Reed of Rhode Island, the ranking member, Tim Kaine of Virginia, Mazie Hirono of Hawaii, Jeanne Shaheen of New Hampshire and Elizabeth Warren of Massachusetts.

Excerpts from Mattis’ written comments to the committee were in material provided to ProPublica by someone involved with work climate change preparedness at various government agencies. Senate staff confirmed their authenticity.

Dustin Walker, communications director for the Senate Armed Services Committee, said responses to individual senators’ follow-up questions are theirs to publish or not.

Here are two of the climate questions from Sen. Jeanne Shaheen of New Hampshire, with Mattis’ replies:

Shaheen: “I understand that while you were commander of US Joint Forces Command you signed off on a document called the Joint Operating Environment, which listed climate change as one of the security threats the military will face in the next quarter-century. Do you believe climate change is a security threat?”

Mattis: “Climate change can be a driver of instability and the Department of Defense must pay attention to potential adverse impacts generated by this phenomenon.”

Shaheen: “General Mattis, how should the military prepare to address this threat?”

Mattis: “As I noted above, climate change is a challenge that requires a broader, whole-of government response. If confirmed, I will ensure that the Department of Defense plays its appropriate role within such a response by addressing national security aspects.”

In a reply to another question, Mattis said:

“I agree that the effects of a changing climate 2014 such as increased maritime access to the Arctic, rising sea levels, desertification, among others 2014 impact our security situation. I will ensure that the department continues to be prepared to conduct operations today and in the future, and that we are prepared to address the effects of a changing climate on our threat assessments, resources, and readiness.”

Here is some recommended reading for those seeking more depth:

(The Center for Climate and Security also has a helpful chronology of US defense and intelligence output on these intertwined issues.)

“A New Climate for Peace: Taking Action on Climate and Fragility Risks“

“The National Security Case for Funding the EPA“

Also, I ran a discussion on the subject at the Washington offices of the Hoover Institution last month with retired Navy Admiral Gary Roughead, who was chief of naval operations from 2007 to 2011; Alice Hill, who directed work on the intersection of climate and national security policy at the National Security Council during the Obama administration; and David Slayton, a retired Navy officer who is now at Hoover tracking Arctic security and energy policy. Watch the video.