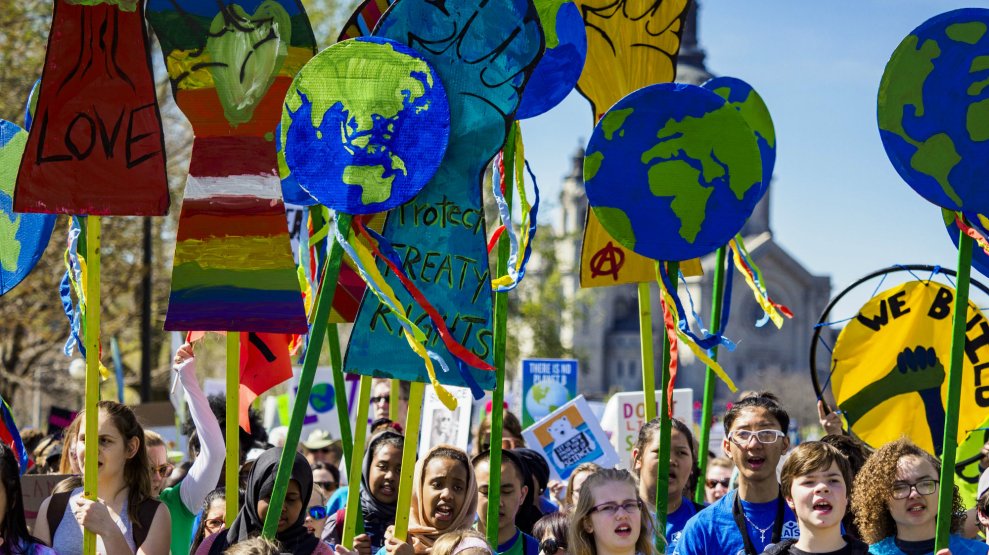 On Thursday, environmentalists and a handful of congressional Democrats gathered at the US Capitol to launch the United for Climate Task Force, a new group for marginalized communities who are facing new threats to the air they breathe and the water they drink. It was Day 98 of Donald Trump’s presidency, and the timing doesn’t appear to have been an accident. As the president’s first 100 days in office draw to a close, environmentalists have grown increasingly alarmed at the administration’s efforts to eliminate regulations and cut programs that promote environmental justice.

From the start, the Trump administration made clear that it planned to rein in the Environmental Protection Agency. Most notably, the White House has proposed massive budget cuts that could fundamentally change the way agency operates. “Over the past few months we’ve seen how quickly this administration is rolling back progress we’ve made on the environment,” Rep. Pramila Jayapral (D-Wash.) said at the Thursday event. “Budget cuts to the EPA will devastate communities of color across the country.” Indeed, people of color and low-income communities face the highest risks from toxic spills, hazardous air, and dirty drinking water, according to the Center for American Progress.

“Budget cuts to the EPA will devastate communities of color across the country.”

Mustafa Ali, the longtime head of the agency’s Office of Environmental Justice, resigned in March. Ali, whose office was charged with reducing the disproportionate environmental dangers facing marginalized groups, told Mother Jones at the time that the administration’s actions sent “a signal that communities with environmental justice concern may not get the attention they deserve.” Weeks later, the Washington Post obtained a 64-page budget memo from the EPA detailing a slew of proposed cuts. They included the outright elimination of the environmental justice office.

In its rush to gut the EPA, the Trump administration also proposed eliminating two programs designed to limit children’s exposure to lead-based paint, which can cause brain damage. One program focuses on training workers in the removal of lead-based paint; the other is public education campaign about the risk. Lead-based paint was banned in 1978, but it’s still common in houses built before then and can be often found in poor and predominantly black and Latino neighborhoods. The EPA estimates that 38 million homes contain lead paint.

The administration has also proposed cutting funding for the cleanup of Superfund sites, which are some of the most polluted places in the country. Those cuts could leave millions of people, many of them in marginalized communities, with little hope that the toxic waste polluting their neighborhoods will ever be removed. In East Chicago, where a Superfund site is causing multiple problems, activists were angered when EPA administrator Scott Pruitt, who visited the city earlier this month, failed to meet with residents and environmental justice groups about the cleanup and other environmental issues.

A hamstrung EPA is not the only concern of environmental justice activists. The White House dealt a particularly stinging blow to indigenous communities with the stroke of a pen. One of Trump’s first actions in office was signing an executive order to expedite the approval of the Dakota Access Pipeline. The 1,172 mile-long pipeline will carry crude oil from North Dakota, through the Standing Rock Sioux’s land. If the pipeline were to leak, it could threaten the tribe’s water source. The tribe and its allies began fighting the pipeline’s construction in 2015 but faced a serious setback after Trump signed the order and a federal judge refused to halt construction. Earlier this month, a federal judge ruled that the developers could keep some information about spill risks secret. North Dakota has averaged four pipeline spills per year since 1996.

Meanwhile, Congress has waged its own assault on environmental justice initiatives. Less than a month into Trump’s term, congressional Republicans voted to strike down an Obama-era rule intended to prevent coal-mining debris from polluting thousands of miles of streams. That pollution primarily impacts poor and rural Americans living in Appalachia. Trump eagerly signed the repeal legislation.

Despite these defeats, environmental justice advocates are digging in for a long fight. “There’s been a disparity of treatment,” Rep. Raul Grijalva (D-Ariz.) said at the Thursday press conference. Communities of color, he added, “tend to be forgotten, and the well-being of this nation depends on the those communities.”