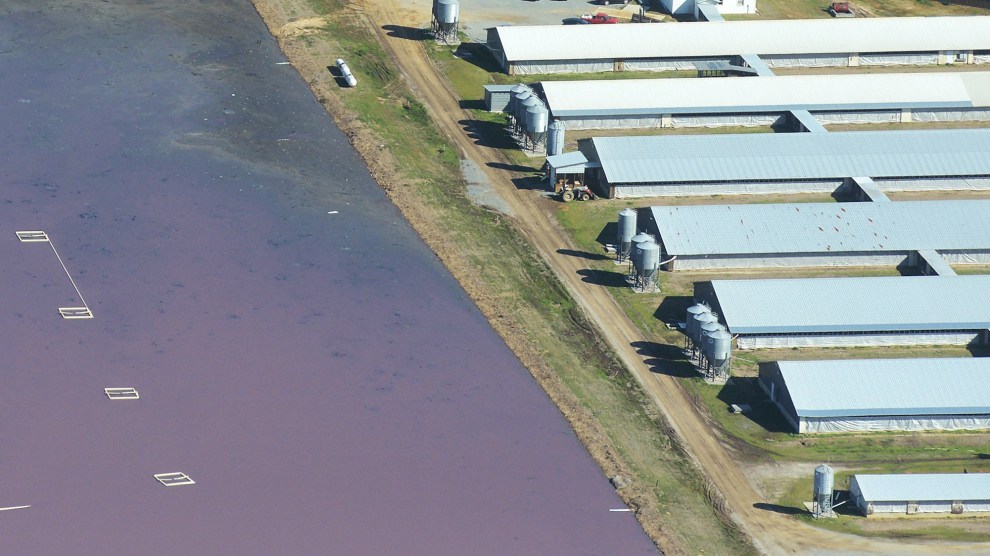 An aerial view of the waste lagoon next to hog houses at an operation in North Carolina's eastern hog belt. <a href="http://flickr.com/link-to-source-image">Photographer</a>/AP Images

Modern hog farms make pungent neighbors. In North Carolina’s hog-wild Duplin county, an average-sized operation holds more than 7,000 pigs, each generating about 10 times the fecal waste of a person. This massive manure gusher falls through slats and is shunted into open cesspools, known, rather delicately, as “lagoons.” When the pits reach capacity, the untreated fecal slurry is sprayed onto nearby farmland as fertilizer.

High levels of air-borne toxins from hog farms can trigger eye irritation, difficulty breathing, and feelings of stress and anxiety.

A recent analysis of satellite data by Environmental Working Group found that around 160,000 North Carolinians, representing more than 60,000 households, live within a half mile of a CAFO or a manure pit. In Duplin County alone, more than 12,000 people—about a fifth of the county’s population—live within sniffing distance of one of these fragrant facilities, EWG found. A growing body of research, summarized here, shows that these operations “pollute local ground and surface water,” and “routinely emit air pollutants that negatively impact the quality of life and health of nearby residents.” High levels of the air-borne toxins hydrogen sulfide and ammonia can trigger eye irritation, difficulty breathing, and feelings of stress and anxiety, research shows.

The NC legislature is working to stick it to the very people who live under these conditions. Bills are pending in the state House and Senate that would severely limit the amount money that can be awarded in lawsuits by property owners who live near “agricultural or forestry operations.” If the bills pass, people who live near CAFOs (concentrated animal feeding operations) will be barred from suing hog growers for making it deeply unpleasant and even dangerous to hang out outside, open their windows, hand their clothes out to dry, etc.

The legislation amounts to a move to protect the state’s powerful hog interests and maintain a classic example of environmental injustice, says Naeema Muhammad, organizing co-director of the North Carolina Environmental Justice Network. She calls the push to limit these nuisance lawsuits a “direct attack on people’s Constitutional rights.” She points to a 2014 paper by University of North Carolina researchers finding that North Carolina’s hog CAFOs “disproportionately affect Black, Hispanic and American Indian residents.”

As the late University of North Carolina researcher Steve Wing has demonstrated, the operations are tightly clustered in a few counties on the coastal plain—the very part of the state that housed the most enslaved people prior to the Civil War. In the decades since, the region has retained the state’s densest population of rural African-American residents—and starting in the early 1980s, experienced a massive CAFO boom. In Duplin County alone, hog CAFOs now churn out 2.3 million million hogs annually—more than 30 for every one of the county’s 60,000 residents, and more than were raised in the entire state as recently as 1982.

The bills’ sponsors openly seek to protect a company called Murphy-Brown from about two dozen pending lawsuits by filed by people who live near hog facilities. Murphy-Brown is the hog-raising subsidiary of pork-processing giant Smithfield, now owned by the Chinese state-owned firm WH Holdings, which calls Smithfield the “largest pork company in the world.” As originally written, House Bill 467 would have applied even to those pending suits. Republican state Rep. Jimmy Dixon, the retired hog farmer who sponsored the House bill, called complaints about the operations “at best exaggerations and at worst outright lies,” and accused plaintiffs of “being prostituted for money” by opportunistic lawyers, The Raleigh News and Observer reports.

According to an analysis of campaign-finance records by the Durham-based weekly IndyWeek, “over the course of his career Dixon has received more than $115,000 from Big Pork,” including $36,250 from “donors associated with Murphy-Brown, the company facing more than two dozen federal lawsuits that this legislation would effectively negate.”

In a 2014 Mother Jones piece on the origin of those suits, Bridget Huber reported from the ground:

“It’s like being held prisoner,” says Elsie Herring, a Middleton and Speer client from Wallace, North Carolina [in Duplin County], who has been dealing with hog stench for years. The odor means her family can no longer enjoy sitting on the porch, having cookouts, or even hanging laundry on the line. “We were here before the pork industry even came in here, so what about our rights?” she asks. “It’s as if we have none.”

Earlier this month, Dixon’s bill passed the NC House—but with an amendment exempting pending lawsuits from the restrictions on damages. Its companion bill, SB 460, remains under consideration by the NC Senate, and it still contains the provision that would essentially nullify existing lawsuits. North Carolina Environmental Justice Network’s Muhammad says it’s anyone’s guess whether the legislation will make into law. After all, this is a state that recently repealed one odious “bathroom bill” under pressure, only to replace it with “new legislation that LGBT rights advocates say is just as bad,” as Mother Jones’ Ashley Dejean recently reported. “We’re in a fix here in North Carolina,” Muhammad told me. “It’s just one bad thing [coming from the legislature] after another.”