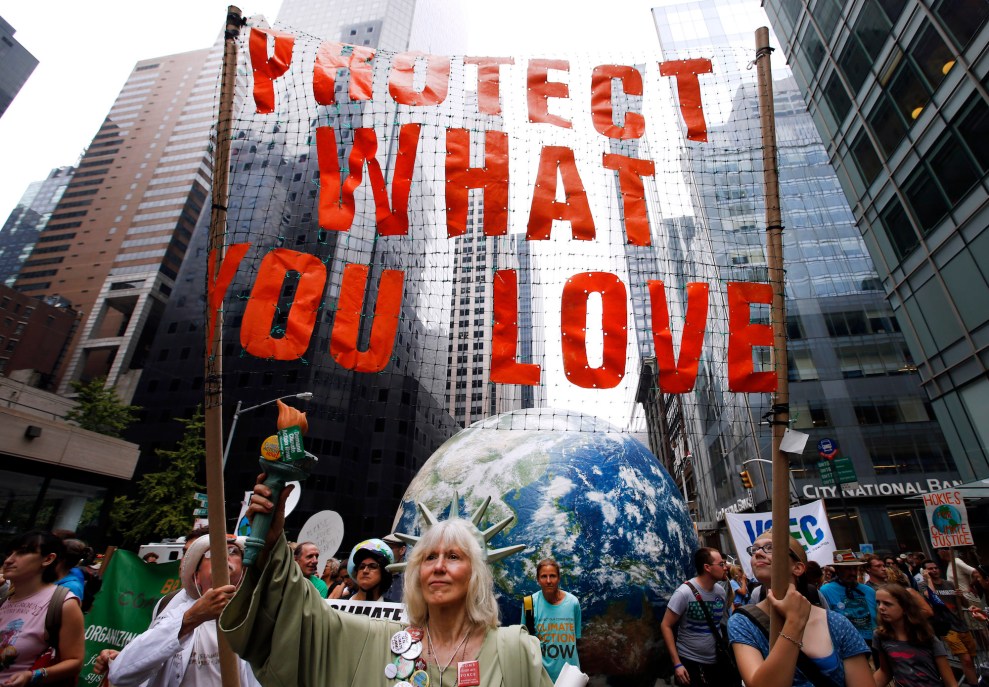 The latest version of organized protest against President Donald Trump is officially underway with the third annual People’s Climate March in Washington, D.C. The event is expected to draw thousands of participants both in the nation’s capital and sister marches nationwide, where demonstrators plan to speak out against the Trump administration’s plans to undo the federal regulations that are in place to fight climate change.

Coincidentally, Saturday’s march also marks the first 100 days of Trump’s presidency. During that period, the president has stacked his administration with prominent climate deniers, proposed eliminating billions in scientific research, and threatened to withdraw from the Paris climate treaty.

Mother Jones has three reporters on the scene in DC. Be sure to follow Rebecca Leber, Nathalie Baptiste, and Tim Murphy in DC, Jaelynn Grisso in New York, Karen Hao in Oakland, along with our rolling collection of updates below:

3:20 pm ET As we get ready to finish our coverage, here is something to think about.

During the march, Trump tweeted this.

Looking forward to RALLY in the Great State of Pennsylvania tonight at 7:30. Big crowd, big energy!

He might want to check out what happened in his own back yard today, as thousands of people chanted, “The oceans are rising and so are we.”

Check this out: this is one BIG #climatemarch in DC! pic.twitter.com/ZgEe8wZqRU

3:05 pm ET A report from Oakland, where an idigenous leader sings some songs for the climate marchers.

3:03 pm ET Leonardo DiCaprio is all in on the climate march.

Honored to join Indigenous leaders and native peoples as they fight for climate justice. Join me in standing with them. #ClimateMarch pic.twitter.com/Zrgt090lI6

2:50 pm ET This is what is happening at the Bay Area march.

Yes these bikes are literally generating all the energy necessary to power the stage and music.#peoplesclimatemarch pic.twitter.com/tsG1WeClvo

2:45 pm ET Here are some conversations Rebecca Leber had at the march in DC.

There was worry having two marches in two weeks would dilute both causes. But I’ve talked to a fair number of people today who were at both.

I asked some climate marchers what’s worried them most about Trump:

Annie, a Catholic from Virginia cites the “routing of the EPA” & rollback of monuments & Antiquities Act

.@MWMullowney a researcher at Northwestern whose grants come from NIH, is worried a destabilized climate will spread infectious diseases.

Andrew Potts, an archeologist, says the worst thing about Trump is federal government is leaving frontline communities behind.

I would love to know what’s going through the minds of the White House staffers who’ve come out to observe the marchers #climatemarch pic.twitter.com/iARgsm9EKq

2:33 pm ET Marchers are starting to gather in Oakland, Calif.

“Why are you marching today?”
“Isn’t it obvious?”
-Barbara Rhine and Marie Mintz with #1000grandmothers#peoplesclimatemarch pic.twitter.com/Cp66rzTwYd

there is a band pic.twitter.com/Cv5lbmPRtV

2:15 pm ET Tim Murphy catches up with a man who wants to be the next governor of Virginia.

2:10 pm ET Marchers have arrived at the White House. Wonder who is at home?

Crowds of people sit in front. Hard to see but folks from inside the White House have come out to watch. #climatemarch pic.twitter.com/JaJSx4hPvy

2:05 pm ET Here are some reports from New York, where there are celebrity sightings, and Chicago, where it’s raining.

Meanwhile, back in DC, scientists and educators at the march are calling themselves “defenders of truth.” According to the march website, they “defend the facts and promote scientific learning in service of humanity.” 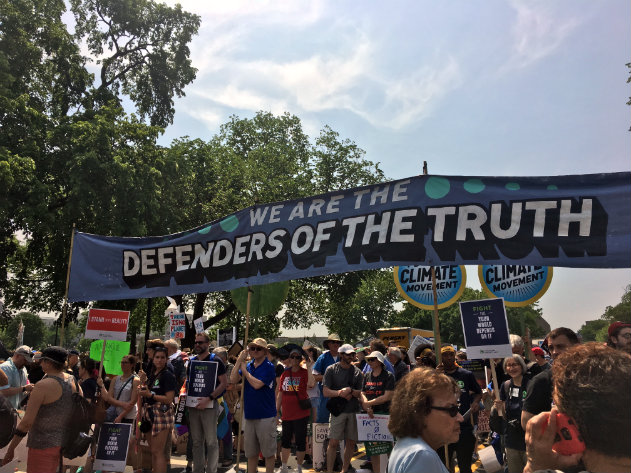 1:45 pm ET  And look who Rebecca Leber just saw. Bill Nye, who also marched for science last weekend, tells her, “Science is political but we don’t want it to be partisan.”

I walked up to a chart and found @BillNye there. pic.twitter.com/sZn467sfYu

I’m told Senators Cantwell, Whitehouse, and Markey showed up to the climate march

What do we want? Climate justice. When do we want it? Now! #climatemarch #peoplesclimate pic.twitter.com/JGlv7xsU3s

Check this out: this is one BIG #climatemarch in DC! pic.twitter.com/ZgEe8wZqRU

1:16 pm ET The marchers are now going past a particular hotel. They have something to say about its owner.

1:12 pm ET Our environmental reporter Rebecca Leber is on the scene.

1:10 pm ET Despite the heat, this dog persisted.

This doggo has a few things to say #climatemarch pic.twitter.com/WRVTbSuVft

And they’re on the move! Atmosphere is just like a parade #climatemarch pic.twitter.com/Ddi5GgvP0e

12:41 pm ET Here are some participants from Historically Black Colleges and Universities.

12:35 pm ET Nathalie Baptiste captures the mood on the mall.

12:32 pm ET While you are waiting for the march to begin, take a look at some of our great Climate Desk coverage.

Ahead of the #PeoplesClimateMarch, catch up with @ClimateDesk‘s coverage of environmental policy in Trump’s America https://t.co/EkyfoPyqN0

12:25 pm ET The crowds are growing and the temperature is rising—and that’s the point.

12:14 pm ET Marchers came to DC from all over the country.

Wally from upstate NY has a very science-y sign but if you don’t understand it, the other side makes it simple #climatemarch pic.twitter.com/TCG6ewLTSQ

11:50 am ET Environmental justice is a crucial part of this conversation—so are broken promises.

A direct rebuttal to all the promises Trump has made to coal miners #climatemarch pic.twitter.com/VYNcVX1xYy

11:32 am ET From DC where the weather is clearing. Temps supposed to rise above 90 today.

Remy on the colonialism wagon: POTUS isn’t being shy about being racist so “our message needs to be equally as strong” #climatemarch pic.twitter.com/TL6UW6jPbF

Feeling inspired by the @World_Wildlife activists & members who are marching w/ us at #PeoplesClimate pic.twitter.com/6UA3N3vMZN

11:25 am ET This is what is happening in Pittsburgh right now.

10:09 am ET People are still gathering under overcast skies for the Climate March in Washington, D.C. but even before it began, the EPA tweaked its website.

Before the #PeoplesClimateMarch, the EPA removes its climate website in order to change it to better reflect Trump https://t.co/dEwQp2Estm

The #climatemarch is underway in Denmark! …