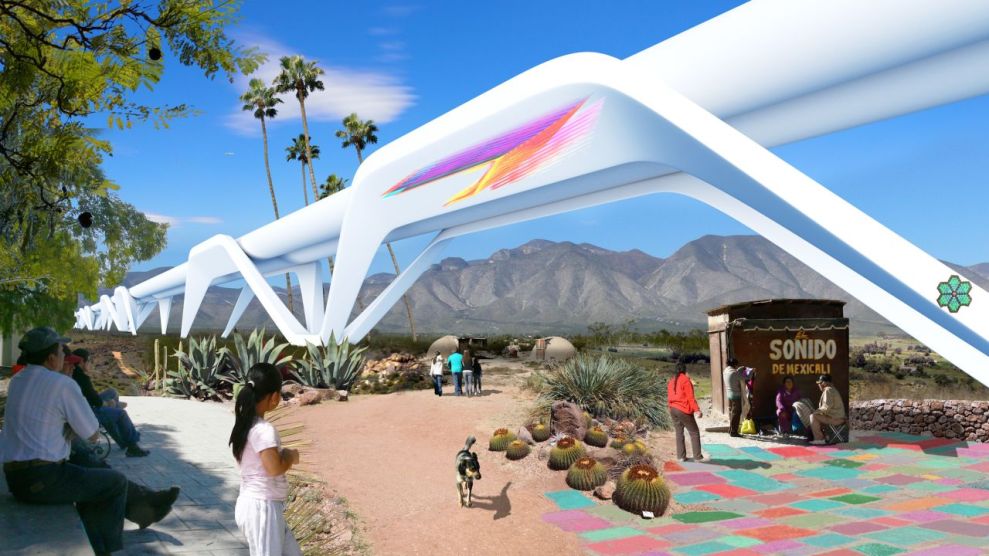 When President Trump appealed to the public to submit proposals for his “big, beautiful” border wall, you can be pretty sure that the plan presented by the Mexican American Design and Engineering Collective (MADE) was not what he had in mind.

In response to the president’s mad quest to build a wall along the US-Mexico border, the group of 14 designers, engineers, builders, and architects from the US and Mexico proposed something entirely different—a high-tech “ecotopia” called Otra Nation.

“Otra Nation will be the world’s first shared co-nation open to citizens of both countries and co-maintained by Mexico and the United States of America,” the group says in their proposal. “Besides sharing the same geographical conditions, the continuous exchange of information, knowledge, artistic expression and migration between sides will produce fertile ground to bring forth a hybrid sense of identity.”

Reflecting their ideology, the group is an even mix of US and Mexican professionals, and while they prefer to keep their identities anonymous, MADE spokesman, Memo Cruz, says that members of the group have worked with the last four US presidents and the last two Mexican ones. “We came together as people who wanted to come up with a solution to a broken system,” Memo said. “And sometimes to break a broken system is to make a new one.”

Far from the wall Trump envisions, the MADE collective wants to build a high-speed, electric hyperloop connecting different parts of Otra Nation. According to the group’s proposal, the new co-nation would be six miles wide and span the 1,200 miles from San Diego/Tijuana to the Gulf Coast. The land would be “drill free,” and used for a “regenerative agricultural system that will become a bread basket for the two countries.” To top it off, the whole thing would be powered completely by solar and other renewable energy sources, creating thousands of jobs and billions of dollars in trade. 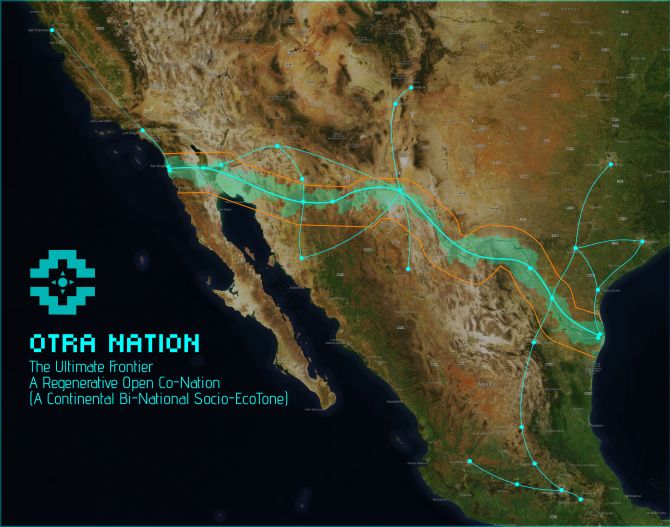 Among the 200-plus proposals submitted to the Department of Homeland Security (DHS) by the April 4th deadline, Otra Nation was definitely one of the more idealistic.

At the other end spectrum were walls made of wire mesh impossible to climb or cut, or constructed with one-way plexiglass panels so that US citizens could look into Mexico, but not the other way around.

Other designs were so whimsical that they could only be interpreted as a mockery of Trump’s ambitions—a wall made of organ pipes or a line of trees with hammocks strung between them.

From comical to xenophobic, the range of ideas submitted to DHS highlighted just how divided the US is when it comes to issues of immigration and border security. But while many of these proposals included green technology like solar panels or windmills, none acknowledged the true environmental consequences of building a wall along the border.

That may be in part because we don’t really know. The last and only environmental review of US border security policy was conducted by the Immigration and Naturalization Service—the precursor to the DHS—in 2001. Effective for five years, the review has never been updated, and since then the size of the US Border patrol has more than doubled and hundreds of miles of fences and walls have been built.

“American environmental laws are some of the oldest and strongest in the world, and they should apply to the borderlands just as they do everywhere else.”

This is the basis of a legal challenge by Arizona Congressmen Raul M. Grijalva and the Center for Biological Diversity put forth in early April. Citing the the Environmental Policy Act, the lawsuit calls upon federal agencies to conduct an environmental analysis of the proposed wall before any construction takes place.

“American environmental laws are some of the oldest and strongest in the world, and they should apply to the borderlands just as they do everywhere else,” said Rep. Grijalva in a statement. “These laws exist to protect the health and well-being of our people, our wildlife, and the places they live. Trump’s wall—and his fanatical approach to our southern border—will do little more than perpetuate human suffering while irrevocably damaging our public lands and the wildlife that depend on them.”

Even without a review, it’s clear to environmentalists that Trump’s wall would be a disaster. “It would be the end of jaguars and ocelots in North America,” Randy Serraglio, a conservation advocate for the Center of Biological Diversity, said, naming only two out of the hundreds of animals whose migratory patterns and natural habitats would be jarringly broken by a 30-foot tall wall.

And, while information on the environmental impact of the US Border wall is scarce, a recent European study on the security fencing dividing countries in Eastern Europe and Asia confirms Serraglio’s fears. The study conducted by Norwegian scientists showed that the 15,000 to 19,000 miles of fence, much of which was erected in response to Europe’s growing refugee crisis, poses a “major threat” to wildlife.

“We’ve invested millions of dollars in establishing and protecting these areas over the years,” Serraglio said. “It makes absolutely no sense to throw that all away because Donald Trump wants to wall off the border.”

We only need to look at 654 miles of barriers that have already been erected along the border under the Clinton and Bush administrations to see just how bad things can get, said Serraglio. He points to instances like the destruction of the Tijuana Estuary system by erosion, and the 2008 flash flood in Arizona’s Organ Pipe Cactus National Monument that occurred because the border barrier inhibited the natural flow of rain water. The same storm led to two deaths and $8 million dollars of damage on the other side of the barrier in Nogales, Mexico.

There’s got to be a better way

Of all the designs submitted for Trumps wall, Otra Nation may be the only one advocating for a dismantling of the existing fence line. “We actually think that we can remove the physical borders that have already been put up,” said Cruz.

According to the MADE spokesman, Otra Nation would provide better border security than any physical wall could by using a high-tech system of biometric surveillance and universal smart ID cards. “The ID system that we are proposing is the toughest ID system in the world,” Cruz said. “It is far more stringent than anything the US government has right now.”

The idea may have some Orwellian undertones, but for environmentalists Otra Nation’s wall-less border is a welcome alternative to Trump’s vision. Still, many conservationists stress that it’s not just the wall, but the roads, the vehicles, the buildings, the noise, the high-powered lights, and other security installations, all of which will take its toll on the land and its inhabitants.

For now though, Trump’s wall seems about as far from reality as Otra Nation’s vision of a new age “ecotopia.” The administration has yet to figure out who will pay for the project that the DHS now estimates will cost nearly $22 billion dollars, nor has Trump answered how he intends to build the wall when 1,255 miles, or 64% of the border, runs right down the middle of the Rio Grande. Barring the unlikely scenario that Mexico will elect to host the wall on their side of the river, the US will have to effectively cede a large section of the Rio Grande to Mexico, a move which would undoubtedly affect ranchers, landowners, energy companies, and the local communities that rely on the Rio Grande for water.

Despite these inconsistencies, the president seems hellbent on fulfilling his campaign promise to build a “great” wall to keep immigrants out of the United States. His budget already sets aside $1.4 billion for the initial development of the project, and the bid process is moving forward with the DHS expected to announce a shortlist of 20 proposals by the summer. Those chosen will then build 30 ft. prototypes of their design in the Otay Mesa Community outside of San Diego.

“I know we’ve got a million to one chance of getting selected,” said Cruz. Still, he hopes that MADE’s Otra Nation proposal will at least generate conversation between members of the US and Mexican governments about alternative ways of looking at the border that don’t involve a wall. “Even if we’re not selected, to get the two governments to sit down and look at what we’ve done with these solutions, that will be a huge win for us.