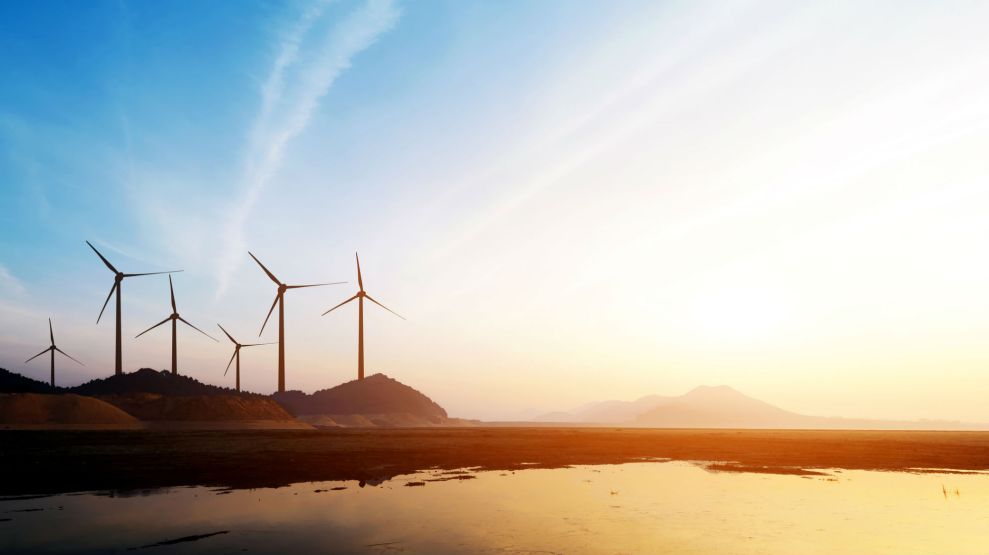 President Trump loves to boast that he’s going to bring back coal—he said as much again on Monday when he signed his Clean Power Plan executive order. But the economics just don’t work in his favor. King Coal has tumbled from its traditional throne as renewable energy prices have plunged and cheap, cleaner natural gas has flooded the markets. From 2000 to 2016, meanwhile, wind-power generation has increased 37-fold (to more than 2,100 trillion Btus), giving rural America a boost in the process. Solar, which accounts for a smaller part of the pie (335 trillion Btus) grew even faster: by a factor of 67! And that doesn’t even account for the growth in rooftop solar.

In 2016, the American solar industry provided more jobs than its coal industry did, according to a recent report from the Department of Energy. And despite Trump’s coal talk, the Solar Foundation projects another 10 percent increase in solar employment this year.

So will Trump keep his promise to put the miners back to work? Can he? Even Robert E. Murray, the chief executive of one of the nation’s largest coal mining companies doubts it. “I really don’t know how far the coal industry can be brought back,” he conceded recently. Indeed, here are just a week’s worth of news highlights demonstrating why coal might have a tough time overcoming the nation’s momentum toward cleaner energy.

March 22: Abita Springs became the first city in Louisiana—one of the nation’s most energy intensive states—to pledge to using only renewable power sources by 2030. This “is a practical decision we’re making for our environment, our economy and for what our constituents want,” Mayor Greg Lemons noted back in January. (Abita Springs is part of St. Tammany Parish, 75 percent of whose voters backed Trump during the election.) Madison, Wisconsin announced its own 100 percent commitment the same day, bringing the total of cities making this pledge to 25. Prominent state policymakers, including the Republican governors of Illinois, Ohio, and Michigan, have also vowed to boost the percentage of renewables in their energy portfolios.

March 23: The share of electricity coming from renewable sources hit an all-time peak in California in late-morning, when renewables successfully met 57 percent of total demand—solar and wind accounted for 49 percent. The state is also ahead in meeting its 2030 goal of having renewables serve half of all energy consumption. A bill introduced by Democratic state Sen. Kevin de Leon last month would reset that deadline to 2025. Under De Leon’s bill, California would also follow Hawaii‘s lead and establish a target of 100 percent renewables by 2045. You want jobs? The Golden State’s solar industry employed more than 100,000 people last year, a 32 percent increase from 2015—and the rapid employment growth is projected to continue.

March 27: To the surprise of environmentalists, EPA boss Scott Pruitt signed off on a renewal of the Clean Air Act’s Regional Haze Program, which requires coal-fired plants near national parks and wilderness areas to install stringent pollution controls. The costs of complying with the ruling likely doomed one Arizona power plant, says Earthjustice attorney Michael Hiatt. By 2025, the plant must either transition to natural gas or be shut down entirely. “This is a powerful illustration of, try as the Trump administration might to keep burning coal, a lot of times it just doesn’t make any economic sense,” Hiatt says. “Because of this rule, the days for burning coal are numbered.” Since 2010, according to the Sierra Club, 175 US coal plants have ceased operation, and 73 are scheduled to retire by 2030.

March 28: Brewing giant Anheuser-Busch joined the ranks of nearly 100 other big businesses by committing to source all of its purchased electricity from renewables by 2025. “Climate change has profound implications for our company and for the communities where we live and work,” CEO Carlos Brito said in a statement. “Cutting back on fossil fuels is good for the environment and good for business.” Other companies committing to RE100—a global business initiative to increase the use of renewables—include Google, H&M, Walmart, and Goldman Sachs. Microsoft says it got to 100 percent renewable energy in 2014.

March 29: As Trump makes moves to sabotage the Paris accord, China is stepping in to take the lead as both the largest emitter of carbon and the largest investor in solar and wind power. “As a responsible developing country, China’s plan, determination and policy to tackle climate change is resolute,” foreign ministry spokesman Lu Kang said after Trump signed his order to roll back Obama-era climate rules. China isn’t the only country making strides: The UK set a new record for solar-electricity generation this past week, beating out coal-fired generation by six-fold. Australia, which relies on coal for two-thirds of its energy, is preparing for a major solar push as better technology drives down costs—seven large-scale projects were completed last year and more than a dozen are now under construction. Costa Rica is on track to be carbon-neutral by 2021. Last year, it met more than 98 percent of its energy demands with renewables. As a report from the International Renewable Energy Agency shows, the US is lagging behind.