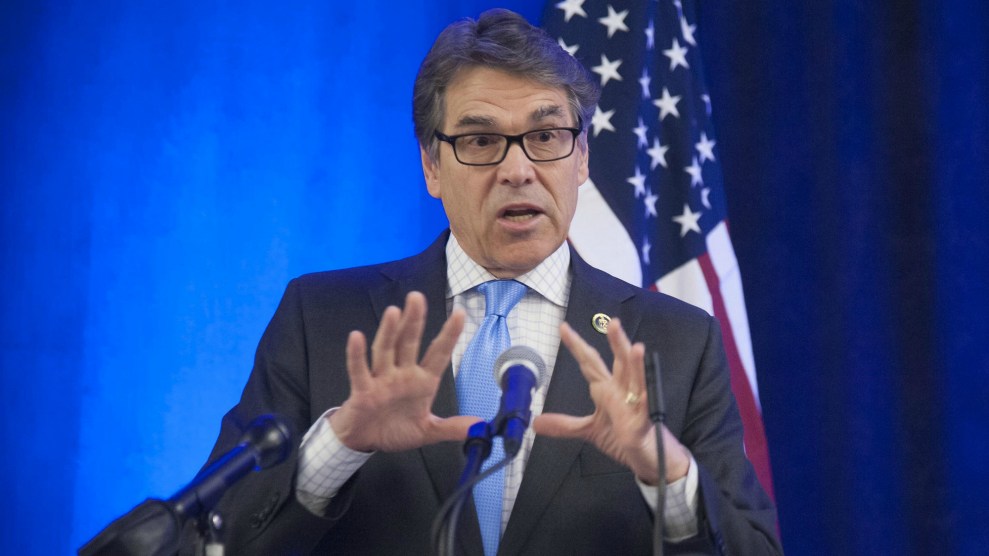 On Tuesday, Secretary of Energy Rick Perry and Environmental Protection Agency chief Scott Pruitt were each pressed, at separate events, to clarify whether President Donald Trump still considers climate change to be a hoax. Neither actually answered the question, but they left no doubt that science continues to be a low priority when crafting the administration’s official position.

At a White House briefing on Tuesday meant to showcase the administration’s pro-nuclear policies, Perry faced multiple questions about climate change. When they shifted from “energy dominance” to Trump’s views, Perry adopted Press Secretary Sean Spicer’s tried-and-true response: “I have not had that conversation with him,” he said.

Perry was asked about Trump’s efforts to pursue a “better” Paris climate deal—after the administration’s withdrawal from the international agreement in June—and admitted, “I’ve never asked the president what a better deal is.” Nonetheless, the Secretary of Energy noted,  “I’m pretty sure the president of the United States wakes up every day thinking about how to get a better deal” with respect to many issues.

He was able explain his own views, and, not surprisingly, they are in lockstep with this administration. “The science isn’t settled yet,” Perry said, claiming that there’s still too much confusion to have a debate on policy, but he’d welcome more debate on the science. “This is America. Have a conversation,” he said. “Let’s come out of the shadows of hiding behind your political conversations and let’s talk about it! I can full-well be convinced but why not let’s talk about it?” Several climate scientists have asked for just that kind of a conversation. Ten Florida scientists offered to educate him back in the fall, and a top scientists pushed for the presidential debates to give the issue more attention.

On Capitol Hill, EPA Administrator Scott Pruitt’s exchange with Senator Tom Udall (D-N.M.) at a Senate appropriations subcommittee hearing on EPA budget cuts was a variation of the same theme. In several different ways, Udall asked this question: “What is the official Trump administration position on accepting the scientific evidence that manmade climate change is occurring?”

And repeatedly he got pretty much the same answer.

Unlike Perry, however, Pruitt tried to provide a more nuanced policy response. “Human activity contributes to it in some measure,” Pruitt said, but “measuring it with precision is very difficult.” He acknowledged that in 2007, the Supreme Court clearly ordered the EPA to issue an endangerment finding on whether climate change endangers public health. But, he noted, the Clean Air Act does not give the EPA the “toolbox” to regulate emissions from power plants. Many environmental legal scholars disagree, saying that the EPA has full authority to require plans from states to limit greenhouse gas pollution.

Interestingly, Pruitt pointed to the EPA’s work on greenhouse gas regulations of vehicles as an example of what is, in his view, a proactive way the Trump administration will continue to respond to climate change. But those standards may be in jeopardy following a presidential review.

Pruitt repeated that his agency is “responsible for responding to the endangerment finding.”

Whether Trump believes climate change may be beside the point: His cabinet officials represent all the shades of climate change denial, and that may be enough.

#TFW when you nailed the @WhiteHouse press briefing. #EnergyWeek pic.twitter.com/GEbvkWSeVK